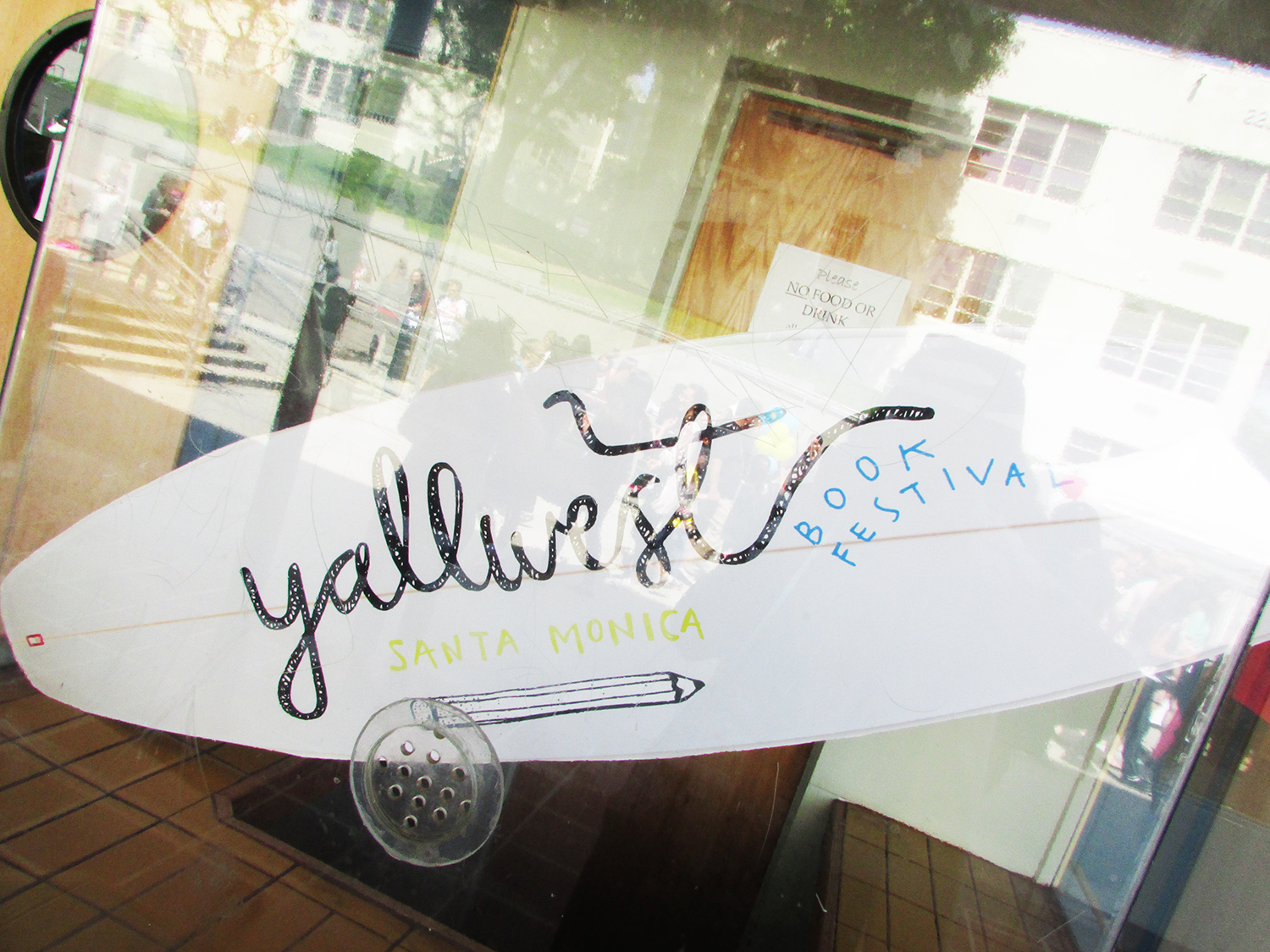 Bookstacked writer Addie reports from YallWest: a gathering of YA authors and readers.

There were too many panels and not enough time. Panel topics ranged from cosplays to writing tips to retelling classic fairy tales to discussions about what’s popular now. Some of the panels that I attended were That Time I Sucked,  “Strong Female Characters” Ugh!, the Afternoon Keynote: Tea with Marie and V (Marie Lu and Veronica Roth) and Smackdown in which all the authors in attendance participated in all sorts of fun shenanigans which included games such as Tic-Tac-Toe, Taboo, some of the authors read some of their earliest literary works, and tons of jokes and laughs.

In That Time I Sucked, authors Melissa de la Cruz, Lisi Harrison, Tahereh Mafi, Veronica Roth, Coe Booth and Greg Neri talk all about the times they got bad book reviews, got fired from jobs, what they learned from having manuscripts be rejected by publishers, and how they keep inspired to keep writing even when what they’re writing suck. To end the panel, we were treated to a bonus lightning round of “Suck/Don’t Suck” where we found out what these authors think they are good at.

Moderator: is there any way you can suck at writing but at the same time still feel good about it?

Veronica Roth: Yeah…The first short story that I wrote in college that I critiqued by my class…This story was ripped to shreds. Like, it’s haunting me still. But it [the story] was terrible…I went home and cried ’cause I was like “They hate me. I’m terrible.” But once I got over it, I looked at their comments…and it was incredible. These were very intelligent people giving me extremely good advice….I was able to revise it and ultimately the short story turned into something I was proud of. I’ve come to value some harsh criticism as long as it’s thoughtful and smart because it makes me better. Ultimately if you can focus on the fact that you’re improving, I think the suckage can be redeemed.

Tahereh Mafi: …One of the most helpful failures…as a writer was all the manuscripts I wrote that were no good. I wrote 6 manuscripts before I actually wrote the book that would get published…To know that I had actually completed a manuscript from start to finish was so inspiring as a person who had never done something like that before…knowing that you can get yourself back up again is important…Each failure taught me how to do something better.

Audience Question:  What book inspired you to become a writer?

Tahereh Mafi:  I was going to say that too!

The “Strong Female Characters” Ugh! panel was actually created by Veronica Roth and Margaret Stohl. According to Veronica, the reason she created this panel is because, “I’m asked about strong female characters a lot.” and she doesn’t understand this “new trend” as she called it, of  “strong, female characters” in Hollywood movies, such as Katniss Everdeen, Tris Prior, Black Widow. And so she thought she would ask fellow authors Victoria Aveyard, Kimberly Derting, Shannon Hale, Stephanie Perkins and Morgan Rhodes if they’ve ever been asked about their strong female characters and what their responses are.

Moderator: Have you been repeatedly asked about strong female characters and if so, what did you say?

Veronica Roth: I guess my answer is that I always want to write complex characters…I constantly get asked, “Strong female characters are starting to become a trend in movies. What do you have to say about that?” and I’m like, “I don’t even know how to begin answering that question.”

Kimberly Derting: I’m not sure I’ve really ever been asked whether I write strong female characters. I’m not even sure I set out to write strong female characters. I set out to write smart characters, quirky characters, people like the women I grew up with. My mom was single, my grandmothers were both single and they were all very independent women and I think that’s what I wanted to write…independent girls who were free thinkers…That’s what I create as characters. I want women who can think for themselves, who have their own personalities, their own thoughts.

The Afternoon Keynote: Tea with Marie and V. was my favorite panel because it was the most in-depth and more personal panel since it was a back and forth conversation between Marie Lu, author of the Legend and The Young Elites series, and Veronica Roth, author of the Divergent series. They had a wonderful time talking about tea and how to hold the pinky out, the differences between writing about sci-fi and fantasy worlds, favorite heroes and villains authors, their respective book series and writing habits among other fun bits.

Marie: I’ve always loved Darth Vader and Magneto and Loki. I always saw them a bit more interesting than Thor and who’s the other person who’s fighting Magneto?

Marie: I like that we were talking about superheroes/villains in general and how your favorite superhero is Batman.

Veronica: Yeah. ‘Cause he’s angsty. I like it I like the angst. Superman is like “ohh” all American, Kryptonite—Kryptonian. He’s from Krypton, so what’s the deal with that? Why is it kryptonite that hurts him if he’s from Krypton?

Marie: (laughs) I don’t know. We need to find that out.

Marie: I have to listen to music when I’m writing but I cannot listen to lyrics. So I have very specific types that I listen to.

Veronica Roth: Writing habits! I listen to music too. But I can listen to lyrics. Actually this time, when I was starting to channel a particular voice I would listen to different kinds of music, so uh I needed—I listened to the new Sia album over and over. I have all the words memorized.

Audience Question: How do you choose character deaths? Is there one that is always going to die?

Marie Lu: My characters kill themselves…Sometimes I feel like my characters take a life of their own…I actually don’t know a lot of the deaths that are happening in the books until the moment that they happen and then I’m like, “Oh, no. There you go.” I feel like a director with no power over my actors. I feel like they’re in a trailer somewhere talking about me.

Veronica Roth: Sometimes I hit a point in the manuscript where I’ve been setting up a character death for 50 pages and I have no idea. Like you reach the point and you’re like “Oh, I know what has to happen here. Oh no.” But…the more major/significant the character…the more they were planned, for me, because it has to be for a really good reason. But I have planned several character demises in advance from the very beginning. The ones you are thinking of: yes. Since the first one.

Fun Facts from the Event
Gallery