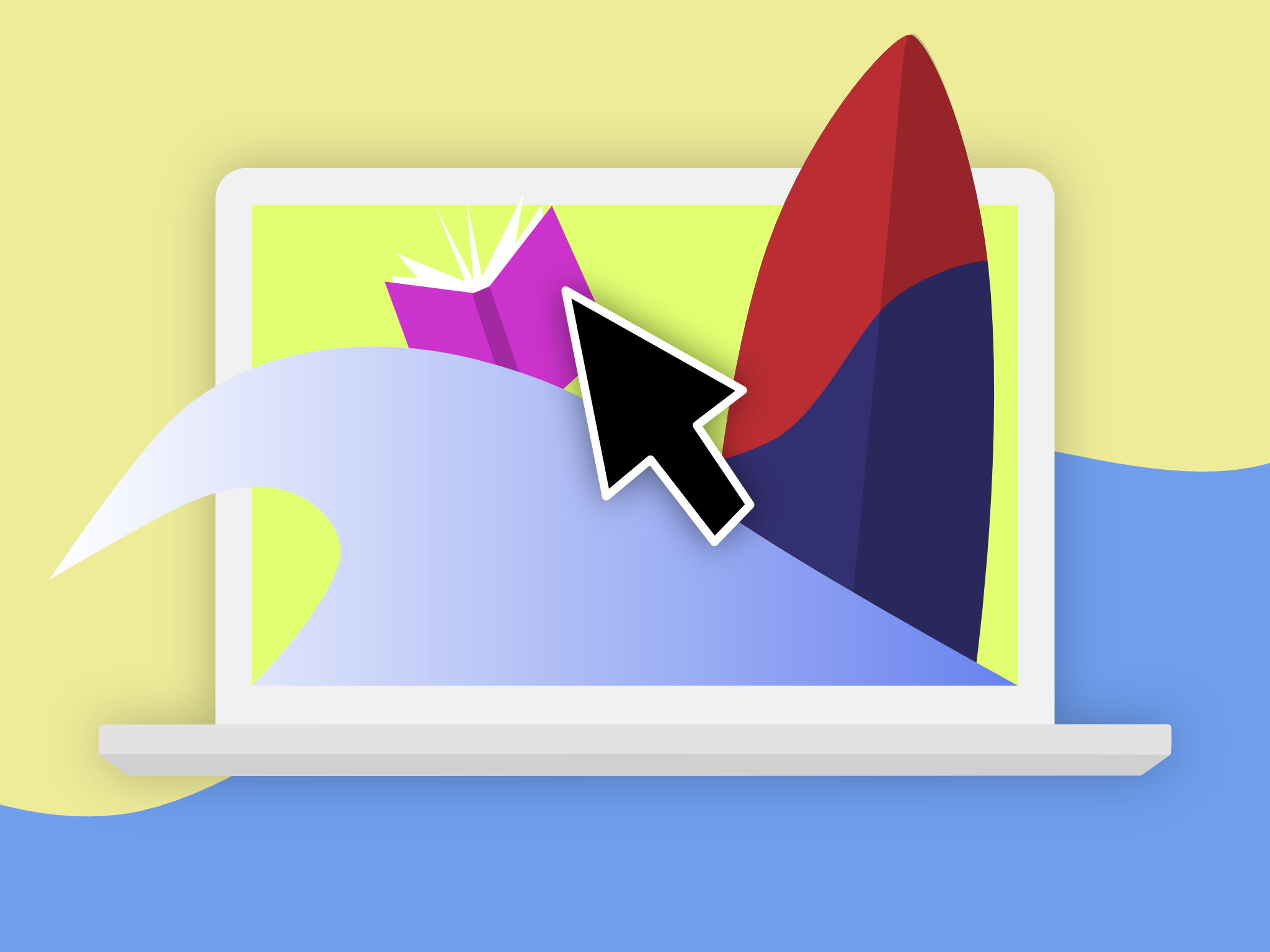 YallWest 2020, the popular YA book festival based in Santa Monica, California, is underway — only this time online rather than in-person. (Saul Marquez, Bookstacked)

More than 80 authors participated in the event.

YallWest 2020, the popular and free YA book festival based in Santa Monica, California, took place April 25 and 26 — this time online rather than in-person.

Due to the COVID-19 pandemic, organizers rebranded YallWest 2020 as YALLSTAYHOME, a virtual book gathering that took place largely through Zoom conference calls.

Bookstacked writers Saul Marquez, Kristy Mauna and Spencer Miller attended the online panels throughout the weekend and covered the event here. Notable panels and events are recapped below.

The authors dive right in and share stories of growing up and how it helped shape their writing. Dhonielle Clayton expressed how she tried to blend in just so she wouldn’t be labeled by any stereotypes. Charlotte Nicole Davis tells us how growing up in the suburbs led her to believe that people only wanted to read stories about straight white people.

Each author agrees that writing your truth is what’s most important to tell a story, and how that can include all types of characters. “Every page, you know, we are never just one thing,” Adam Silvera said.

The ‘Writing Empathy’ panel was a great discussion on how to use your anger and joy to tell a good story.

The ‘LGBTQIA Q&A’ was moderated by David Levithan and included the voices sexually and gender diverse authors from a variety of YA genres.

Tehlor Kay Mejia, Alex Sánchez, George M. Johnson, Sam Maggs, Kacen Callender, Victoria Lee and Charlotte Nicole Davis answered fan questions and shared advice on coming-out or “inviting in” and finding confidence in your own gender and sexual identity. Authors explored the history of queer representation in YA literature through sharing their own reading experiences growing up, including stories about fan fiction, Tumblr and sneaking queer books out of the library.

The panelists detailed some of the challenges they continue to face as writers of queer content for teens. “I want to push back on the idea that as queer people we can’t exist on the front cover, on the back cover and on every page inside the book” said debut author George M. Johnson.

Both the positive and negative experiences of their time in high school have influenced these author’s writing. “The feelings of being a teenager have incredibly stuck to me” said Julie Buxbaum “most of us YA writers write the book we wish we had as teens”.

In a touching moment, the panelists shared how important it is to them to give hope to their young readers. “I try to write my characters with so much love” said Leah Johnson. The panelists agreed that they hope their characters can inspire readers to be more loving with themselves.

The panel finished with advice for aspiring writers which included reading “widely and wildly” and writing the stories only you can tell. Don’t be discouraged when your first draft doesn’t look like the books you see in libraries and bookstores. You are a writer whenever you write.

Our moderator, Roshani Chokshi, was joined by Renee Ahdieh, Gwenda Bond, Jennifer Donnelly, Marie Lu, and Bethany C. Morrow. Each author took a moment to discuss how they build their own unique world. With such different concepts for each of their stories they all agreed that it helps to have a deep connection with the world you’re building upon. Whether it be historic icons, ghosts, sirens, vampires, or a world readers are already familiar with, it’s important to take elements you love yourself and making it your own. As Renee Ahdieh said, “as artists we aren’t painting with colors, we are painting with words.”

Shortly before the start of the second day of YALLSTAYHOME, organizers said they would re-do Saturday’s This American Experience panel later in the day after attendees expressed disappointment in Lauren Myracle’s moderation. The panel will be moderated by Nic Stone.

Authors cap off the day with games

A super-packed day came to a close with a session of Jackbox games and other fun segments.

The game didn’t go quite according to plan, as some adult-themed questions showed up in the mix. But laughs were had and more than 700 audience members participated at one point.

The night finished with a game of authors drawing emojis and a quick dance party.

He also surprised the audience with his topic: the idea that “you can do anything” is a lie. “The media in general likes to tell this lie to teens,” he said.

Even still, Sanderson emphasized that he wants people to be aspirational. Rather than saying “You can do anything,” he suggested an alternative: “I can do hard things, doing hard things have intrinsic value and doing hard things can make you a better person, even if you’re failing.”

He shared setbacks in his career and difficulties he’s overcome — including burnout as a writer. At the end of it all, he emphasized the difficulty of writing and reaching goals. More specifically, he talked about how to find success in your own way.

“Keep going. You can do hard things. It’s difficult but it’s worth doing,” Sanderson concluded.

What does it mean to be a modern American? Which experiences are unique and which knit us together? Where did we come from and where are we heading? YA literature, with its focus on identity and self-exploration, is uniquely positioned to answer these questions.

Panelists Jennifer de Leon, Natasha Diaz, George M. Johnson, Bill Konigsberg and Angie Thomas, with moderation from Lauren Myracle, shared how their personal experiences growing up and living in America has affected their writing across their careers. These authors shared diverse experiences and talked about topics in mental illness, race, gender and sexuality and more.

“I understand the power of what we’re doing,” said Hate U Give author Angie Thomas, “I see the energy that young people have towards changing their communities and I feel encouraged.”

But the panel also caused controversy due to some comments from Myracle. According to Twitter users, the moderator made insensitive comments about the need to tell the stories of straight white males.

“Part of our programming today did not live up to our YALLWEST ideals of inclusivity and creating a safe space for all,” YallWest organizers said in a statement late Saturday night. “We are deeply sorry, and are reaching out to everyone involved to find the best way to resolve the situation.”

Panelists cited political developments in Bolivia, immigration issues, history, imperialism and political activism as key influences in their writing. They also dived into how they turn to writing as a way to process today’s issues.

“It’s been my escape … I needed this window,” Aveyard said of writing the Red Queen series in the wake of the 2016 U.S. presidential election.

But while some of the topics they touch on in their books are dark, they highlighted the importance of sparking hope in readers. Paige cited diversity and representation, specifically female characters at the fore-front of YA novels, as sources of encouragement for her and readers.

“For me, that’s hope,” Paige concluded.

An all-female panel featuring Nic Stone, Becky Albertalli, Cecil Castelucci, Traci Chee, Romina Garber and Sarah Watson told us why it is so important for authors to speak their truth.

The conversation started with friendships. “How does friendship have the power to save us during times like we have today?” asked moderator Nic Stone. Putting supportive female friendships on the page can help to empower young female readers. Stories can be tied together with love and love sustains us during difficult times.

Belonging was another theme important to the panelists. “A lot of us writers, we feel like outsiders,” noted Romina Garber. Authors can help their young readers find a sense of belonging through their writing. It is more important than ever to combat isolation and help find social connectedness.

A difficult question posed to the panel was if authors should shield young people from dark topics? “Not only can we not shield them, we should empower them and empower their voices,” responded Sarah Watson. “Kids are living in the same world we are living in. We need to talk to them. To say we are here with you” added Cecil Castellucci. All of the authors agreed that teenagers are paying closer attention than adults think. They look forward to the art that today’s teenagers will make in the years to come.

‘Modern Magic Worldbuilding’ with Ransom Riggs and other YA fantasy writers

The COVID-19 pandemic remained a reoccurring theme. The panel began by exploring the appeal of jumping into fantasy worlds during uncertain times. Beyond escapism, these authors asserted that fantasy has always been a natural way of exploring the real world.

The panel concluded with advice for other writers including leaving worldbuilding “gaps” in your stories encouraging reader’s imaginations to fill in blanks and become coparticipants in building your world.

Alexandra Bracken, Nicola Yoon, others, talk about how they’re coping with the pandemic

In its second panel, authors discussed some of the challenges they’re facing as writers in the time of the COVID-19 pandemic. The panel included Simone Elkeles, Alexandra Bracken, Sam Maggs, Sarah Enni, Nicola Yoon and David Yoon. While many conceded that their day-to-day routines are largely the same (as most of them already work from home), they talked about some of the anxiety that everyone’s feeling due to the pandemic.

David Yoon noted how he’s been surprised to find that he has less time to write these days, especially since they’ve had to find time to homeschool as of late.

“Our writing time has gotten cut in half,” Yoon said.

Others mentioned that they’ve leaned even more into their writing projects to cope. Bracken mentioned she’s working on “another-world portal fantasy” to “escape our world.”

Above all, the authors agreed that it’s important to take care of yourself — whether that’s binge-watching television or turning off the news for a moment. Don’t feel the pressure to be overly productive.

“Anything you enjoy is not wasted time,” Bracken said.

YALLSTAYHOME officially kicked off with a massive Zoom gathering of authors. YallWest founders Margaret Stohl and Melissa de la Cruz confirmed that this year’s event is the largest in the festival’s history. The online event has pulled in more than 45,000 registrations, according to Stohl.

“This is the biggest one we’ve ever had,” Stohl said.

Following the quick kick-off, the panel shifted focus to Stohl’s and de la Cruz’s latest novel, Jo and Laurie. Author Pseudonymous Bosch moderated the keynote. The authors revealed bits about the creative process behind writing the book, a sort of “fan fiction” (their words) re-telling of Louisa May Alcott’s Little Women.

Saul Marquez
Saul Marquez founded Bookstacked in 2014 and serves as the site's Editor-in-Chief. He primarily covers news for Bookstacked. He also co-hosts Bookmarked: A YA Book Podcast.
Spencer Miller
Spencer is a high school English teacher in Montréal, Canada. He loves graphic novels and books about road trips.
Kristy Mauna
"And she is the reader who browses the shelf and looks for new worlds but finds herself." - I'm a writer who enjoys telling you all about the things I love, which includes a lot of books!
Related Reads • You'll enjoy these too ...