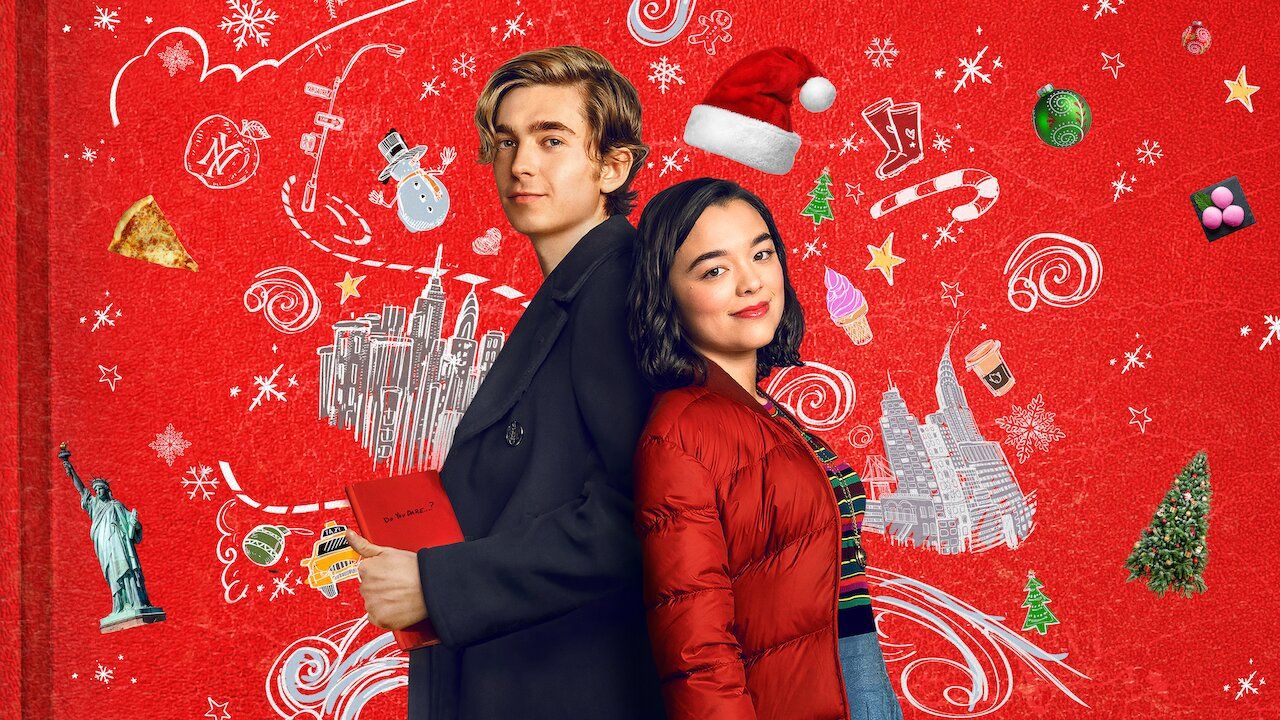 There’s definitely more than 10, but we’ll start with these.

When it comes to Dash and Lily’s Book of Dares book vs. television series, I think it is best to say the book was the inspiration for the Netflix series rather than what it was based on. I think readers of the book will agree that there is a sense of Christmas magic in the dares! Two people explore New York City — the most magical place in the USA at Christmas time — and discover who they really are. A boy who hates Christmas and a girl who thinks relationships are pointless. Yet with each other, they open their minds up to the magical possibilities Christmas can bring. Seriously, the book was absolutely magical.

The television series is a feel-good holiday show. Of course, it follows the same concept as the novel, however, it lacks true character development and the true magic of the book in the eight, 20-minute episodes. While I could go on and on about the differences (and the frustrations that go along with them), we’re going to take a look at 10 major ones that diminished the magic of the Book.

Here are all the ‘Dash and Lily’ TV show differences!

In the Book: Lily has blonde hair, black-rimmed glasses. She is also possibly of Spanish descent as Dash’s friends compare her a bit to his ex, Sophia, who is also Spanish.

In the Show: Lily is half Asian and half White. No glasses. Dark hair. Quite literally the opposite of Lily in the book — likely a goodwill effort to make the show more diverse.

In the Book: Dash sets up a dare for Lily and places Boomer at the dare so he is well aware of their meeting.

In the Show: Boomer meets Lily at the first book drop-off and they continue to talk randomly throughout the series. Furthermore, Dash has no idea that Boomer has seen Lily. This brings me to point number 3.

In the Book: Dash knows Boomer has seen Lily and they joke about how Boomer won’t reveal anything to him. Even though Dash wants to spend Christmas alone, he is always available to hang out with Boomer.

In the Show: Dash is rarely seen with Boomer after the first Dare. He even blows up at Boomer for having met Lily and blows him off on Christmas day! That is not who Dash is and does not reflect the friendship he has with Boomer.

In the Book: The Hanukkah Band party is one of Lily’s biggest hurdles. She builds up the confidence to go and when she does, she is able to let herself go and have a great time! It is in the bathroom that she finds where to leave the notebook. However, when she comes out of the bathroom she is too scared to approach the men at the bar and runs out, accidentally leaving her boot.

In the Show: Lily starts by having a great time at the Hanukkah party — despite the nightmare she had before leaving. But the reason she leaves is because she runs into Edgar who always called her weird in school. Instead of accidentally leaving her boot inside, she slips in slush and loses it. While this difference doesn’t seem that big of a deal, the Hanukkah party was a moment of hope and belief for Lily which was exactly what she needed.

In the Book: Edgar is the kid who released a cat on Lily’s gerbil in elementary school. When they reunite in the book, Edgar seems genuine and wanting to befriend Lily. Sofia is Dash’s ex-girlfriend who is visiting New York from Spain after she moved. When they reunite, they agree they are better off as friends and have genuinely missed each other’s company.

In the show: Edgar is the kid who called Lily weird and when they reunite he continues to do so! It later comes out that he admired her weirdness and that was why he kept calling her that. Sofia returns from Spain and confesses she is moving back! She even attempts to get back together with Dash. When he denies her, she gracefully accepts their friendship.

In the Book: Lily never kisses Edgar! As she begins to prepare to kiss him, she sees her missing boot in someone’s hand. It’s Dash!! Of course she’s drunk so she isn’t completely coherent. The point is, she doesn’t ruin her first kiss by kissing Edgar!

In the Show: Lily kisses Edgar while drunk at the bar. Literally everything else in this scene is similar to the book, except for the actual kiss! This is part of the magic of Christmas of the book! Lily deserved her first kiss to be with Dash.

In the Book: There are a few times where Dash and Lily could have run into each other. They were both supposed to be at the December 26th party at Priya’s house. However, Lily and Edgar ditch it to go to the movies.

In the Show: Lily and Dash are both at the party on December 24th at Priya’s house. They even speak! But before Lily can introduce herself, Sofia interrupts to take Dash away.

In the Book: Dash’s divorced parents have both gone out of town because they think he is with the other parent. Lily’s parents are away in Fiji because her dad got a job interview. We don’t know when Dash’s parents return but Lily’s parents are set to return on New Years Day which we don’t actually get to see.

In the Show: Dash’s father arrives unannounced and unexpectedly back from a trip with his latest girlfriend before leaving again. They have dinner together and even reconcile some of their differences. Lily’s family returns, surprisingly, on Christmas day and announces they are moving to Fiji on New Years Eve!

In the Book: Dash runs into Lily while she’s walking Boris, one of her new clients’ dog. While they’re walking and talking, Boris runs off and Dash catches the leash. Chaos ensues and a baby goes flying in the air. While Dash finally has Boris under control, Lily dives in order to catch the baby. Half the world thinks they are heroes and the other half thinks they were trying to kidnap the baby! The two end up in a holding cell with Boris and are eventually cleared of any charges.

In the Show: This scene doesn’t even happen. In fact, the show jumps from Christmas to New Years Eve with no events in between. While I understand the scene in the book wouldn’t be believable on screen, it is a huge part of Dash and Lily becoming comfortable with each other.

In the Book: This is the most magical part of the book. This is when they show how much they truly know the other. Dash makes an incredible gesture to bring Lily to a beautiful studio kitchen stocked with every baking necessity imaginable — literally Lily’s dream! Just as impressive, Lily brings Dash to a hidden gem in The Strand where the complete volumes of the Oxford English Dictionary are stored — which has been on Dash’s Amazon wish list for forever. This is the purest and most magical part as Dash re-evaluates his hope in Christmas and Lily realizes relationships may not be all that bad.

In the Show: Lily and her family spend the day at their family temple for otoshidama — a tradition where her grandfather calls out his disappointment in their decisions for the year. Lily ends up calling out her grandfather for is own decisions, but they all leave preparing for their move to Fiji. In the cab on the way to the airport, Lily receives a text from her brother of Dash’s last journal entry dare. She jumps out of the cab when they’re stuck in traffic and runs to The Strand where Dash has set up a New York City date for her last night. Before the clock strikes midnight, everything magically comes together where Lily doesn’t have to move with her parents to Fiji and she gets her midnight kiss with Dash. While this is beautiful, it doesn’t reflect how deeply they know each other.

Dash and Lily’s Book of Dares is a magical Christmas adventure with awkward teens. Netflix’s ‘Dash and Lily’ is fun and cute but the differences take away from the magic that Rachel Cohn and David Levithan created.

What changes did you see? Do you think the magic was diminished in the show? Let us know in the comments!