From Hunger Games to Taylor Swift, these icons from the past decade shaped YA. 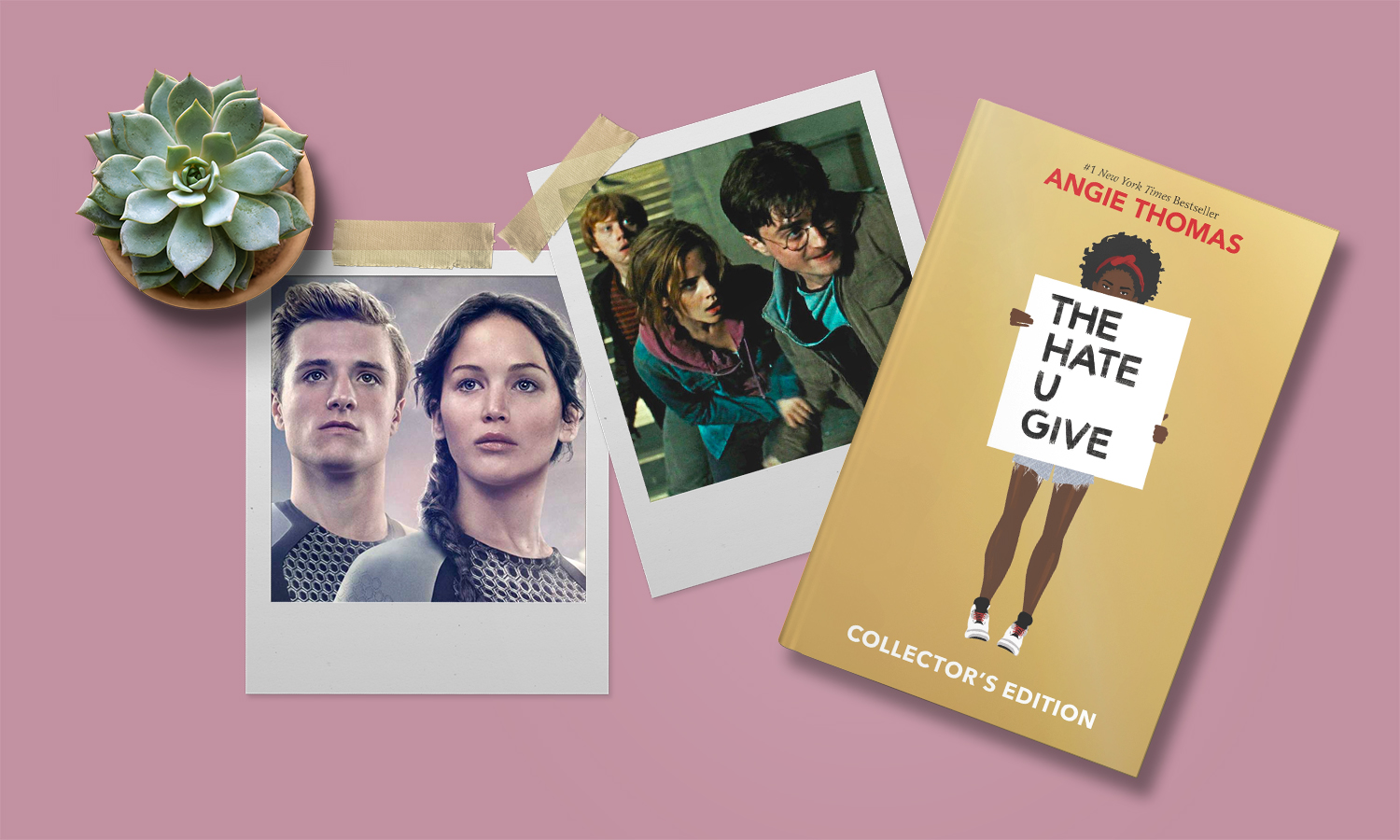 From Hunger Games to Taylor Swift, these icons from the past decade shaped YA. (Illustration: Saul Marquez, Bookstacked)

As 2019 comes to a close and a new decade is about to begin, we decided to take a look back on some of the biggest pop culture moments of the decade and their connections to YA.

Harry Potter was a big part of my life and of the lives of millions of fans worldwide for the better part of 10 years. In the summer of 2011, it all came to an end with the film release of Harry Potter and the Deathly Hallows Part 2. Fans everywhere watched the nearly four-hour-long red carpet live stream from Trafalgar Square in London where the premiere was being held. It was bittersweet to say the least, saying goodbye to such a big part of our lives. And if you watched the live stream, heard J.K. Rowling’s speech and say you didn’t cry, you’re a liar.

While the books came out in the mid-2000s and two of the five films were released before 2010,  Twilight still played a pretty major part of this decade. With #TeamEdward and #TeamJacob wars going on, bad wigs, excess of merchandise (some normal and others…not so normal) and Robert Pattinson being the #1 anti-Twilight voice, I would be remiss in not including Twilight in this list. Because although we may not talk about Twilight anymore, we have to admit most of us were fans of it at one point in time.

Although the books had been around since 2008, The Hunger Games fandom really took off in 2012 when the books were adapted for the big screen. The books remained in the top three favorite teen novels, so much so that in 2012, the trilogy surpassed the Harry Potter series as Amazon’s bestseller. The movies were some of the most successful book-to-film adaptations (in my opinion) that gave us not only some wonderful memories and actors such as Philip Seymour Hoffman, Jennifer Lawrence, Liam Hemsworth and Elizabeth Banks, among others — but also amazing one-liners such as: “That is mahogany!” “May the odds be ever in your favor.” “I volunteer as tribute!”

Well, where to begin? Let’s start with the good. The Divergent book trilogy was great even if many, many readers disagreed with the ending of the last book. Author Veronica Roth succeeded in making the reader feel immersed in the world she created in a very detailed manner. Now for the bad and ugly: the movie adaptations. The movie adaptations of Veronica Roth’s trilogy lived up to their name by severely diverging from the source material into something that … well, we still don’t know how to explain without getting worked up about it. But if you really want to know what some of our thoughts about it were, you can read about it here or listen to our thoughts on our podcast ‘Bookmarked‘ here, here and here.

Lin-Manuel Miranda’s brainchild made its Broadway stage debut in 2015, it became one of the best selling Broadway shows ever! Everyone from President Obama to Beyonce and Jay-Z to Prince Harry and Meghan Markle wanted to see the show. It has been so popular since its debut that the play soundtrack has its own remixed version and a behind the scenes book — that became its own juggernaut — that was released in 2016. On top of that, ‘Hamilton’ even spawned its own YA book trilogy in Melissa de la Cruz’s Alex and Eliza books. It was and still is everywhere and I am EXCITED to see it next spring!

The Hate U Give

One of the most important and relevant books of the decade, written by Angie Thomas, brings forth important and serious issues that thousands deal with every day. It ushered in an era of YA that tackles similar social topics. As I wrote in a past article:

“The book touches on many subjects that are a lot more serious and so much more relatable to POC than to white readers. The subjects that Angie Thomas touches on are something that we are seeing more and more now in the news and through social media. Social media is a recent phenomenon, but by no means does that mean that certain types of behaviors like the ones in The Hate U Give are new. The fact is that social media has helped bring them to the forefront and those affected are finally able to have their stories told. And rarely, if ever, have stories been told from a POC’s point of view like we’re beginning to see today.”

In this decade, Disney went on a major spending spree, making some of the biggest purchases of the entertainment industry and buying everything from Marvel and Fox Studios to LucasFilm, (a.k.a Star Wars). Not only that, but Disney also made some of the biggest box office hits this decade with film series and interconnected stories in the Marvel Cinematic Universe, like the Avengers movies. And either to the excitement or chagrin of fans, several new Star Wars films were made and released beginning in 2015. There was an influx of Disney-era Star Wars books during this time and we have yet to see how Disney’s growth will impact YA book adaptations, as they’ve acquired the film rights to multiple past and future YA productions.

Not only is Tom Holland the spoiler of Marvel movies, but we came to know him as always being best paired off with Benedict Cumberbatch during press tours. And have you seen him dance? This has to be one of my favorite videos on the internet of all time. Of course, we’re still waiting for his performance in ‘Chaos Walking,’ the was-supposed-to-be-huge movie based on Patrick Ness’ novel, The Knife of Never Letting Go.

Admittedly, I haven’t seen the show yet and, yes, I know its been out forever, but it was kind of hard not to notice its influence in the latter part of the decade. Aside from giving fans long wait times between seasons, shocking deaths and surprises, we also got great one-liners such as “You know nothing Jon Snow” and memes! Its influence was also felt beyond television, giving fantasy a huge boost, even in YA. “Winter is coming.”

The Great British Bake Off

It’s been on the air in the UK since 2010, but just recently we Americans were introduced to this wonderful show thanks to PBS in 2014 and subsequently Netflix. The contestants may range in age, but believe me when I say that they are super relatable and have even spawned some pretty awesome puns, gifs and memes. If you want a feel-good show to binge-watch, I highly recommend it. I love this show so much, I’ve probably binge-watched this show at least a dozen times — and I know I wasn’t alone. One of the hallmarks of the decade was watching YA authors gush about the show on social media.

Making her musical debut in 2008, Taylor Swift really came into her own as a bona-fide superstar with five out of her seven albums being released this decade — from her third album ‘Speak Now’ in 2010 to her latest album, ‘Lover’ released in August of this year. Not only that but she also uses her platform for the greater good, like getting Apple Music to pay songwriters royalties during Apple Music’s free trial period, encouraging young people to register to vote and starting a petition asking the United States Senate to pass the Equality Act. With record-breaking physical album sales in an era where many prefer to stream music digitally, as well as record-breaking tours, whether you like her or not, you can’t deny the impact she has had this decade. Her work has definitely been a huge topic of conversation within the YA book community, including here at Bookstacked.

Please make them STOP! Ok, granted there are some that my generation has never seen but that are being made with relevance to events happening now (like ‘Party of Five’). But do we really need reboots or remakes of everything? (I’m looking at you “live-action” The Lion King.)

You know what they say, “If it ain’t broke, don’t fix it.” Granted, YA readers may have gotten the better end of the deal with Fantastic Beasts, Shadowhunters and His Dark Materials.

Related:
Angie Thomas • The Hate U Give