“Instead of resisting the changes, I’ve learned to look forward to them.” 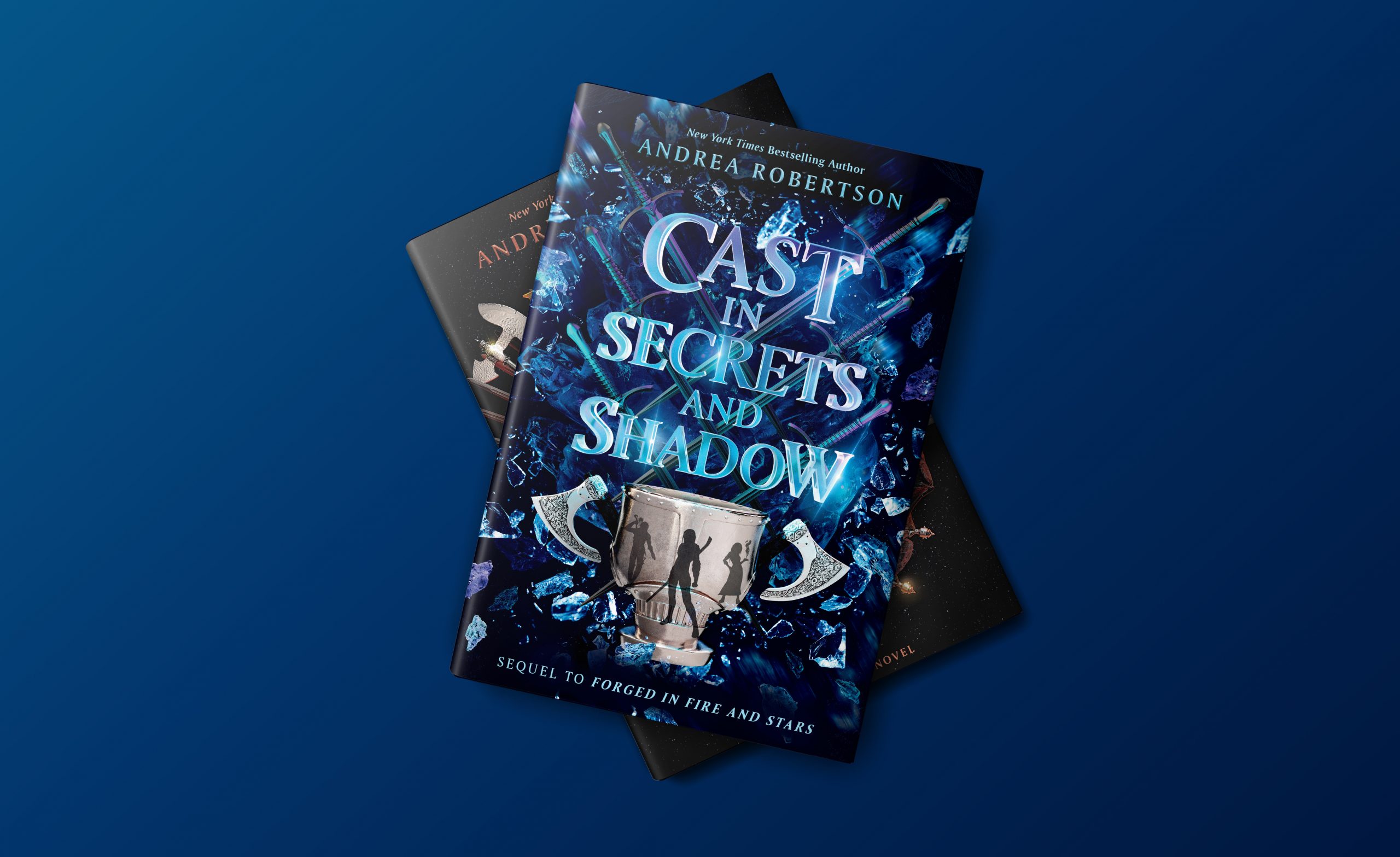 In Andrea Robertson’s Forged in Fire and Stars, readers are introduced to the Loresmith world — a fantasy setting for an epic tale with a young woman named Ara at its center. Now Robertson is returning to her world in the sequel, Cast in Secrets and Shadow, available in bookstores July 20.

Forged in Fire and Stars is filled with histories of old regents, powerful blacksmiths and a daring attempt to reclaim a throne. It’s all the making of a good fantasy story, and it’s no mystery why so many readers fell in love with the book.

Fantasy stories like those found in Robertson’s writing continue to be popular among YA readers — what with the massive success of the Shadow and Bone series on Netflix, not to mention the many other popular fantasy series like An Ember in the Ashes, A Court of Thorns and Roses, and — of course — the ever-popular Game of Thrones that took audiences by storm during the last decade.

So what goes into building a fantasy setting? We spoke with Robertson ahead of the release of Cast in Secrets and Shadow to learn how she approaches writing and worldbuilding. We also learned about the twists and turns that come with writing, and there’s plenty of interesting tidbits to get you excited for her new book.

One of the neat things about fantasy sequels is that they’re an opportunity to expand the world that was introduced in the first book. When it comes to establishing a world — and then later building on that foundation — where do you even start? Do you focus on the people, the magic, the history and lore, or something else entirely?

When I begin a series, I spend hundreds of hours creating lore, religion, topography, and culture of the fantasy world, most of which will never make it into the actual book. I continue to draw on that original creative material with each subsequent book in the series. Sequels are essentially a deeper dive into various aspects of the world. Depending on the twists and turns the characters encounter as I’m writing the book, some areas come into focus more than others. I need all the material available from the beginning so I can draw on it as the plot develops. Doing that pre-book creative work is one of my favorite parts of the writing process.

This isn’t your first series. Were there any past lessons you gleaned from writing the sequels to Nightshade and The Inventor’s Secret that you were able to apply to Cast in Secrets and Shadow?

What I’ve learned from earlier series I’ve written is that it’s okay to be surprised while you’re writing. I’m still not sure how it happens, but as I’m working on a new novel one or more characters will inevitably do something I didn’t plan for, or a character I considered to be minor becomes integral to the plot. Rather than try to force those characters or the plot back onto the path I’d originally envisioned, I’ve discovered that those surprises take the story where it needs to go. Instead of resisting the changes, I’ve learned to look forward to them.

I know you’ve studied history and I imagine that’s influenced your approach to world-building. Are there any cool facts, details or pieces of trivia about the Loresmith world that might appeal to history buffs?

I bring some history into every book I write. The Nightshade series was inspired by the seventeenth-century persecution of witches. The Inventor’s Secret is a re-imagining of early nineteenth-century North America where the British quelled the American revolution. The Loresmith world doesn’t have a direct connection to history like my earlier series, but I drew inspiration from Norse mythology. I have a lot of Scandinavian ancestry and my family took a trip to Norway in 2017 to meet relatives there. While we were traveling, I became fascinated by Viking history and Norse mythology. Ara’s homeland of Fjeri is rooted in that experience and one of the new characters in Cast in Secrets and Shadow is named after one of the Norwegian relatives I met!

I’m sure there are many surprises for readers in Cast in Secrets and Shadow, but I’m wondering (without giving away any spoilers!) if there was something that surprised you about either the world, characters or story as you wrote the book?

I wrote Cast in Secrets and Shadow during the pandemic lockdown and I really struggled creatively during that time. Because I was finding it so difficult to write, I did a lot more advanced planning than I usually do (I’m mostly a pantser), but even with a detailed outline and synopsis guiding me, I still had characters veering off in directions I didn’t expect. As I mentioned in an earlier answer, I love when that happens, but it ended up creating a lot of additional plot that wasn’t in the outline and the book kept getting longer and longer until I finally realized that I needed to move a quarter of the content that I intended to be in Cast to the third book in the series. I’m happy with the result and it just proved to me that no matter how much I plan the characters and story will always go where they want to go.

One of the things that I love about YA fantasy is the focus on feminism, and I know Forged in Fire and Stars and Cast in Secrets and Shadow aren’t exceptions to that. With that in mind, do you have any favorite feminist story arcs or characters you’ve read in recent YA fantasy novels? Any books or authors you would recommend to our readers?

What a fantastic question! Feminism is very important to me and we’re are so fortunate that YA fantasy is filled with characters who embody and strive to promote feminist ideals. Leigh Bardugo’s Shadow and Bone and Six of Crows series have so many amazing characters that are feminist. I particularly love that her characters present an array of empowered women with varying goals/ideals who express their feminism in different ways. I’d also recommend any books by E.K. Johnston, Marie Lu, Renee Ahdieh, Sabaa Tahir, Tamora Pierce, Kiersten White, Libba Bray, Kristin Cashore, Julie Kagawa — there so many amazing authors writing feminist books!

Thanks so much for taking the time to talk to us, Andrea!

Thank you so much for interviewing me. Have a wonderful summer!

About Cast in Secrets and Shadow

Game of Thrones meets Shadow and Bone in the second book in this action-packed fantasy from Andrea Robertson, the internationally bestselling author of the Nightshade series.

Ara has taken up her mantle as the Loresmith–but her journey is far from over. After suffering betrayals and losses, Ara, Nimhea, Lahvja, and Teth must try to come together and find the Loreknights across the kingdom. The Loreknights are their only hope in overthrowing the evil Vokkans and putting Nimhea on the throne for good. But their journey will put Ara and her companions in grave danger–from the endless pursuit of the Vokkans to perilous encounters with the gods, and the near impossible trials they face along the way–will they be able to survive long enough to help the rebellion?

And through it all the Vokkans are expanding their reach throughout Saetlund, putting everyone Ara and her friends love at risk. Only Ara can forge a way forward, take up her powers, and fight to change the world–no matter what it costs.

From internationally bestselling author Andrea Roberston comes the second book in a gorgeously written new fantasy series perfect for readers of Leigh Bardugo’s Shadow and Bone or Sabaa Tahir’s An Ember in the Ashes series.

Purchase Cast in Secrets and Shadow