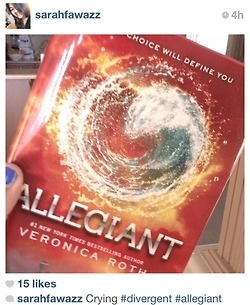 Several Canadian fans have reportedly received early copies of Allegiant nearly a month in advance. Subscribe to Bookstacked News. YA Book Reviews. Upcoming Releases. Monthly giveaways. Weekly. Free. Let’s do this. By subscribing, you accept the privacy policy The news is coming from Tumblr where fans posted pictures of early copies on Instagram, all of […]

The news is coming from Tumblr where fans posted pictures of early copies on Instagram, all of them apparently in Canada. We’re being told that the copies were shipped from Indigo Books.

UPDATE:
Veronica Roth has since responded to the situation via her blog—

I found out earlier today that a very small number of readers received finished copies of Allegiant already, instead of on October 22nd, due to a Canadian shipping error that has since been fixed. I’m disappointed, and I’m sure you are too. I personally have been waiting, pretty much since the trilogy began, for the day when the last book would come out and we would all experience it together–you for the first time and me, with the giddy anticipation of an author who finally gets to watch everyone finish the story that has been so dear to me. That’s why I’ve been so secretive for so long! But accidents and errors just happen sometimes.

If you are one of the people who received Allegiant early: I would love it if you wanted to wait to read it until October 22nd alongside your fellow Initiates. However, I can’t blame you if that’s just not going to work for you. I do ask, no matter what you decide, that out of kindness and respect for your fellow Divergent readers and their reading experiences, you do not post spoilers or quotes anywhere. I know I can count on you to preserve the mystery with me– I may be biased, but I think I have the best readers ever.

Everyone else: I think we’re still going to have a great October 22nd (and weeks immediately following). Be very wary of what you read online, and we’ll come out of this just fine.

We, of course encourage people to not spread spoilers and you certainly won’t be hearing any from us!

Allegiant is scheduled for an October 22, 2013 release.