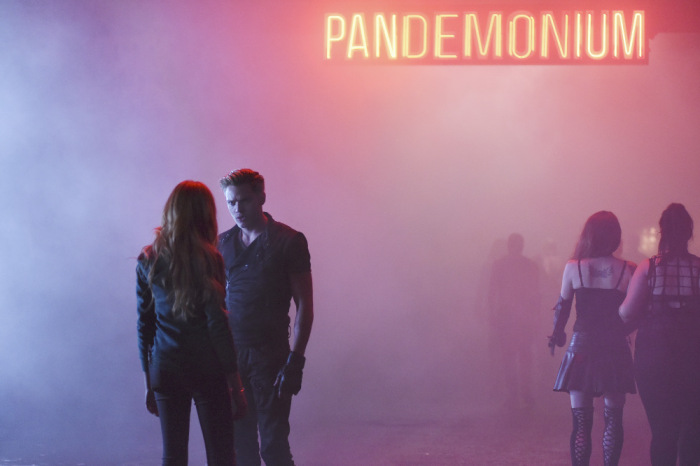 A recap of ‘Shadowhunters’ season 1 episode 1 ‘The Mortal Cup’.

On her 18th birthday Clary Fray is thrown into a hidden world full of demons, warlocks, and Shadowhunters who tell her that she is one of them.

Shadowhunters opens showing our Shadowhunters Jace, Alec, and Isabelle tracking a shape-shifting demon who is selling mundane blood. It’s not long before Jace bumps into Clary outside Pandemonium. Stunned Jace asks, “You can see me?” as we transition into the opening credits.

We flashback to 8 hours earlier where Clary is at the Brooklyn Academy of Arts, showing some of her artwork in hopes of being accepted. She is accepted but not because of her original work but because of her graphic novel and rune sketches.

We see congratulations from Simon, Dot, and Luke. We also see Jocelyn giving Clary a birthday present of an ancient family heirloom, Jocelyn is also adamant about needing to tell her something that seems of great importance. Instead Clary goes with Simon to meet with newcomer Maureen to celebrate her birthday and to watch Simon’s band perform (which is more of a duo with only Simon and Maureen).

We see another flashback to ten years ago when a young Clary comes across a demon with Jocelyn going into action and slaying it. Jocelyn then takes Clary to Magnus Bane, a warlock, and has all of her memories of the Shadow World erased.

We then finally get to see more of our Shadowhunters Jace, Isabelle, and Alec getting ready to go hunt a demon and we soon find ourselves back at the start of the episode where Jace bumps into Clary, who can see him despite the glamour that conceals him from everyone else. Curious and intrigued Clary follows him into the club Pandemonium, where she gets caught up in an action packed fight between some demons and the Shadowhunters with their mystical seraph blades.

Clary believing she killed a guy (a guy that’s actually a demon) runs home scared and in shock, where she tells her mother what she saw thinking she is going crazy. Giving her mother the perfect moment to tell her about the world that she has hidden her from for so long. Before she can Valentine’s Circle members show up and with help from her warlock friend Dot they send Clary away to safety using a magical portal. Jocelyn holds her ground, fighting them (and kicking ass) before taking a potion which puts her into a sleep, stopping the Circle from finding out from her where the Mortal Cup is that Valentine is desperately searching for.

Not knowing what to do Clary of course returns home, their place is trashed, there is blood, and her mother is gone. Clary gathers herself and ends up finding Dot who is insistent on knowing where the Mortal Cup is. Dot attacks Clary, but Dot really isn’t Dot but a Ravener demon sent by the Circle to find the cup. Clary manages to stab the demon with her Stele as she watches Dot morph into the grotesque real form of the demon. Luckily she is saved by Jace who finishes the demon off but not before Clary has been bitten by the demon, causing her to pass out from the demon venom now flowing through her veins.

Clary wakes up in the Shadowhunters Institute infirmary, brought there by Jace, bewildered and in disbelief but healed from a healing rune, which confirms Clary is of Shadowhunter blood (as mundanes cannot survive the power of runes). Isabelle, Jace, and a reluctant Alec explain what they are, their world, and what she saw. Simon then shows up at the Institute, which to him is an abandoned church because of the glamour that stops mundanes from seeing the Shadow World.

Clary goes outside the Institute to Simon, with a glamoured Jace in the shadows. They’re confronted by a Circle member, who Jace fights and stabs as he says, “This is for my father”. After everyone is de-glamourized Simon can finally see what Clary has been seeing.

The episode comes to an end as Simon begs Clary to come with him but Jace is concerned with keeping her safe. Clary is left facing the difficult choice of choosing between Jace who promised to find her mother or Simon her best friend (creating a perfect set up for the obvious coming love triangle). The show then concludes with a shocked Valentine learning that Jocelyn has a daughter, his daughter.