‘Shadowhunters’ 1×02 Recap: ‘The Descent Into Hell Is Easy’ 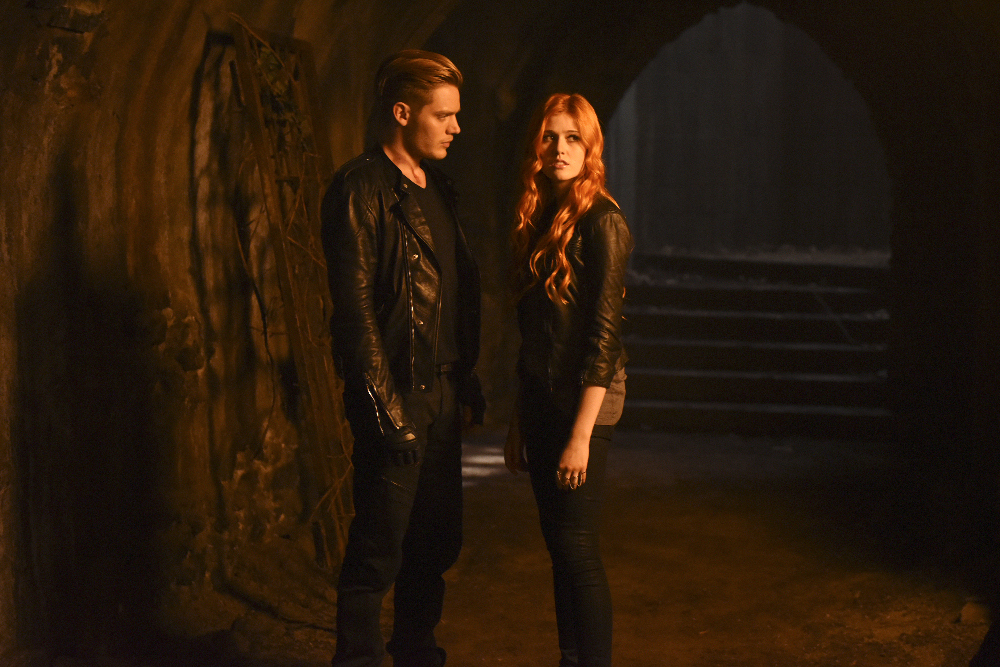 A recap of ‘Shadowhunters’ season 1 episode 2 “The Descent Into Hell Is Easy”.

We continue following the story of Clary Fray who ends up thrown into a world she didn’t even know existed when her mother is taken and she’s attacked by demons, and saved by Shadowhunters who tell her she is one of them.

‘The Descent Into Hell Is Easy‘ begins right where we left off with Clary, Jace, and Simon outside of the Institute, Clary struggling to make the difficult decision between choosing Jace or Simon. Long story short she obviously chooses Jace who promised to help her, to Simon’s disbelief.

All three of them then head into the Institute, which to Simon is still an abandoned church. Until Jace draws a rune and gives Simon the sight to see their world, revealing the true Institute and by now Simon is completely freaked out (who wouldn’t be). There’s more explaining of demons, Shadowhunters, and Circle members for Simon, again under protest from Alec, as Simon is introduced into the Shadow World.

Simon meets Isabelle who’s flirting up a storm with him, as Jace takes Clary to find out about the people who took her mother and why they did from Hodge Starkweather. A former Circle member who can never leave the Institute as punishment, who also swore a vow never to speak of what they did and is tortured if he does.

Jace and Clary learn that Valentine is supposedly dead and the Circle along with him. They hear that Valentine almost destroyed the Shadow World and humanity, and that the Mortal Cup is the most important thing in the Shadow World. That it can make more Shadowhunters or be used to control demons. So in other words Valentine’s a very evil man, he cannot get the cup, and they must stop him before he destroys them all.

A shocked Clary also learns that her mother Jocelyn Fray was once Jocelyn Fairchild, and that she was once a member of the Circle. Jace calms down a distressed Clary who then figures out that Clary’s memories may have been erased by a warlock. Clary thinks the best place to start the search for the cup is with Dot, who may also know what happened to her memories.

Dot is determined to protect Clary and goes to get help from Magnus Bane, who refuses and runs away because Valentine now knows that a warlock made the potion Jocelyn drank, and he’s now hunting down all warlocks.

Meanwhile Clary and Isabelle share a moment, as Luke tries to find Clary by using Simon (where one goes the other follows). Clary’s necklace has some sort of power that shows her a vision of Dot that leads Clary, Jace, Alec, Isabelle, and Simon to Pandemonium, but they don’t get there in time and Valentine’s Circle members kidnap her as well.

As their first plan backfires Jace suggest another, with many objections from Alec and Isabelle, but with no other option in sight Jace, Alec, and Isabelle take Clary with Simon following behind to the City of the Bones. Death awaits Simon if he enters the City of Bones, as mundanes are not allowed. Jace and Clary enter to see the Silent brothers (Shadowhunters with superior powers, which happen to include the ability to recover memories), as Alec and Isabelle stand watch and keep an eye on Simon outside.

As they journey down into the City of Bones they come across a statue of the angel Raziel with the mortal sword and the inscription “Nephilim Facilis Descensus Averni,” which Jace translates to “Looking better in black than the widows of our enemies since 1234,” but it actually means, “For Shadowhunters, the descent into hell is easy.”

Meanwhile outside Alec is completely done with everything, as Simon and Isabelle go to his van to listen to some music (bad idea). Isabelle hears a noise as Simon sits in his van, she tells him to stay there and not to leave the van as she goes to investigate (another bad idea), because someone or something hiding in the back seat takes Simon. (This show has a lot of kidnapping)

Back in the City of Bones Clary is standing under a giant, sharp, Mortal Sword as the Silent brothers begin to recover her memory. We’re thrown back to a memory from two years ago. We see Clary pretending to sleep as Jocelyn and Luke discuss taking Clary’s memories and hiding the Shadow World from her. Jocelyn believes it would be more dangerous for Clary if people knew who she was, Valentine’s daughter.

The episode comes to end as they leave the City of Bones and Clary notices the lack of Simon. They go running, looking for Simon when someone calls out to them. They look up to see two vampires holding Simon upside down a hundred feet in the air clearly threatening his life. The vampires say they will trade him unharmed in exchange for the Mortal Cup and then they vanish, along with Simon, into the darkness of the night as Clary is left screaming for her best friend.

What did you think of this week’s episode? Let us know.