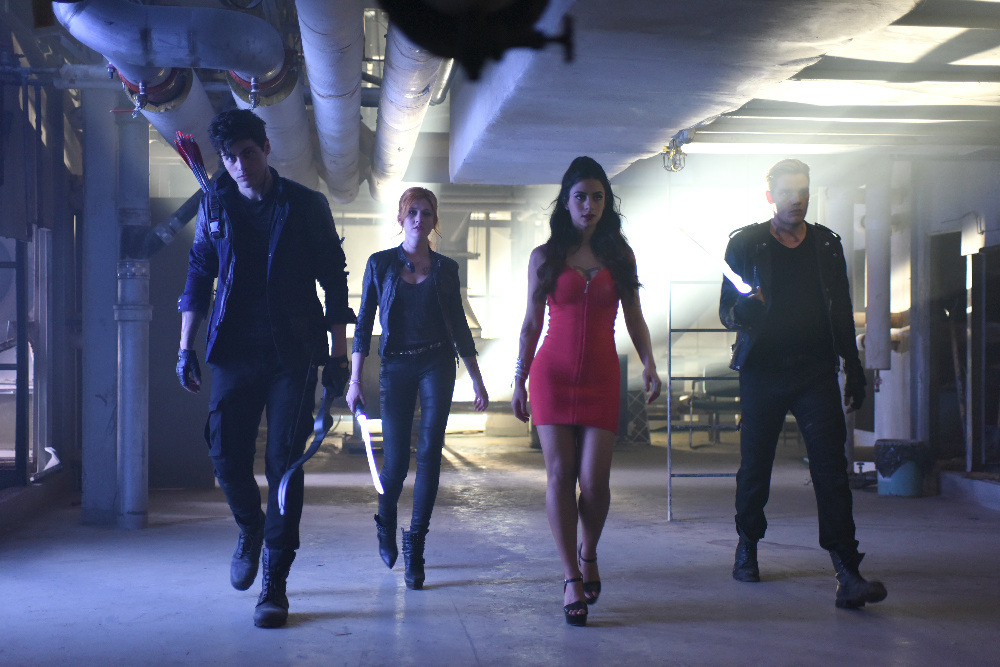 Shadowhunters follows the story of Clary Fray as her world is turned upside down when she is thrown into a hidden world know as the Shadow World. As she begins to discover who she really is, a Shadowhunter, she searches for her missing mother as everyone comes after her and the Mortal Cup.

‘Dead Man’s Party’ opens with our Shadowhunters returning to the Institute. Clary upset and furious at how the Shadowhunters, protectors of humans, could allow Simon to be kidnapped by vampires. Jace reassures her that the vampires will not harm Simon and that they just wanted to draw her out to get the Mortal Cup (which everyone thinks Clary has). They’re left debating what to do next as Clary asks them to put there trust in her.

We see a distressed Simon being held hostage as he pleads for them to let him go. Clary, Jace, Alec, and Isabelle come up with a cunning plan to rescue Simon. As Simon is being held at Hotel Dumont, the vampire’s lair, he comes across an old knife amongst some old artifacts, naturally he uses it to try to escape and with a killer ass throw he hits Raphael right in the heart but Raphael just laughs it off (technically he’s already dead). Camille Belcourt leader of the New York vampire clan walks in, with her disturbing bloodlust she says she cant wait to get to know Simon as we go into the opening credits.

Clary, Jace, Alec, and Isabelle head to a church graveyard to gather some weapons, some are hidden there as all ancient religions recognize demons so in return they support the Shadowhunters. Clary has a moment of guilt and blames herself for everything and Jace tries to comfort her. Isabelle takes off to find a way to get into Hotel Dumont, and Alec and Jace share a few heated words about Clary and what’s been happening.

After locating the weapons Alec and Jace share a great parabatai moment, forgiving and forgetting what has been said. With Alec saying “Don’t ever doubt me, no matter what I said”. Alec heads back to the Institute to get his bow and arrow (finally we get to see Alec using his bow). Jace gets closer to Clary as he teaches her how to use a Seraph blade (with the classic cliché scene) as the tension between the two of them intensifies.

Simon spends his time trying to talk his way out. Camille and Raphael discuss finding the Mortal Cup but Raphael seems against the plan and against breaking the Accords. Isabelle shares a steamy encounter with Meliorn when she visits him to try to get information from him (faeries cannot lie).

Hodge warns Alec, “Don’t make the same mistakes I did”, as Jace and Clary head into a bar to kill time as they wait for sunrise. Jace helps Clary to see vampires by teaching her to peel back the layers of reality to see the Shadow World. Punching a vampire Jace takes his keys and with Clary steals the vampire’s motorcycle, it runs on demon energy and the best part about it is its been modified to fly. (It was great to see the scene from the book)

Camille and Simon get closer as there’s an exchange of blood. Isabelle and Alec cause a distraction as they do she tries to talk to him, to reach him, but he doesn’t listen. Isabelle saying the truth, “You’re hiding from yourself, not me”, to Alec who’s clearly struggling with his inner self and feelings. Alec and Isabelle fight off vampires in style with his bow and her whip, as Jace and Clary look for Simon. There’s more action-packed fighting as Jace fights off two vampires and Clary looses a fight to another. Luckily Alec finds them at the perfect time, saving Clary from getting bitten as she recovers and kills her first vampire.

After defeating the vampires they’re left in a stand off, the Shadowhunters against Raphael who has a knife to Simon’s throat. Raphael makes them drop their weapons, threatening Simon and leads them to the roof. Surprisingly he lets Simon go free.

The episode comes to an end as Clary and Simon have a special moment embracing on the roof (with a clearly jealous Jace standing nearby). “I couldn’t live without you, Simon. You’re all I have left”, she tells him, relieved that her best friend is safe. Alec brings up the subject of Clary again to Jace, who’s had enough of Alec’s dislike and distrust of her. Jace looses his cool and blows up at Alec, leaving a strain on their relationship as Alec walks away. The episode ends showing Simon hungrily eyeing off Clary’s pulsing veins and the blood that runs through them.

What did you think of this week’s episode? What was your favourite part?