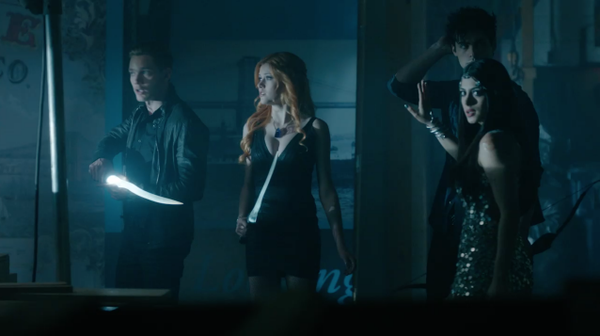 After Clary Fray is thrown into a hidden world full of demons, magic, and Shadowhunters, she must recover her memories to find the Mortal Cup in order to save her mother.

‘Raising Hell‘ opens with Clary startling awake after having a nightmare to Simon sitting next to her, who at first she mistakes for Jace. One name pops up twice during their chat… Magnus Bane, their first real clue in the search for Clary’s memories. Clary runs off to Jace as Simon finds blood coming from his mouth and then sees Camille in the mirror, who isn’t really there, as we transition into the opening credit.

Clary goes to find out about Magnus Bane, who is a powerful warlock, as a shirtless Jace distracts her. Isabelle runs in saying Simon is leaving. Clary goes after him and they have a heated argument about where they should be and who they should trust. Simon then lashes out at Jace as he yells, “Come at me, bro” (Doesn’t that phrase sound familiar… I couldn’t help but laugh) and it almost turns into a fight as Clary steps in between the two.

Jace, Clary, Alec, Isabelle, and Hodge decide to arrange a meeting with Magnus to get his help. Hodge gives them the soon to be necklace of Isabelle (known from the book), that glows red when demons are nearby. As payment for Magnus’s services, as it original belonged to him that he gave to then lover Camille (Yes… the same vampire Camille we’ve already met), and now it becomes a race to get to Magnus before Valentine does.

Valentine kills some Shadowhunter scouts sent by the Clave, as Luke is still yet to find Clary. Isabelle gives some fashion tips to Clary, as the group gets ready to crash a Downworlders party. A fellow warlock tries to convince Magnus against leaving the protection of their liar to go to the meeting with Valentine closing in. Alec lets out a rant to Isabelle as he continues to bottle everything up inside, while Simon goes into a sort of blood trance when Maureen accidentally cuts her self.

Clary, Jace, Alec, and Isabelle go to meet Magnus at the rave to get her memories back. They make the exchange as Magnus reveals he doesn’t have Clary’s memories, he fed them to a memory demon for protection incase Valentine got to him. Magnus also reveals some bad news that Dot is no longer alive because he can’t feel her magic.

A Circle member goes to attack Magnus, Clary, and Jace as Alec shoots him down with an arrow while catching Magnus’s eye in the process. Magnus portals away to safety and Clary gives up hope of finding her mother. Jace tries to track Magnus using an item of his but is not strong enough as Magnus blocks the trace. So he turns to Parabatai Alec, together with their strengthened bond and connection they try to locate Magnus. As Clary comments, “This whole parabatai thing seems oddly intimate, if you ask me”, and I think we can all agree on that after seeing it.

They locate Magnus but as they get their something isn’t right and Alec, Jace, and Isabelle kick into gear with their Shadowhunter stance and weapons drawn. Valentine has found Magnus, as one of his Circle members goes to kill a warlock child Clary doesn’t hesitate to save her with the help of Isabelle and a winking Jace.

Magnus fights a Circle member with his awesome magical powers. (Which we are loving!!). Alec helps, firing an arrow at the man as Magnus finishes him off with a magical blow. Magnus formally introduces himself to Alec who gets all flustered and awkward, which is adorably cute. Magnus finally agrees to help them by summoning the demon but Clary must make the demand, and it can be very dangerous.

That brings us to my favourite scene as Magnus moves the location of his liar, by magic, after it is compromised. With a great show of magic by digital effects and acting from Harry Shum Jr. making it a perfect moment. Magnus continues blatantly flirting with Alec, as Clary must draw the pentagram to summon the demon, as Jace prepares her with a powerful and painful rune.

They all take their places at each of the five points of the pentagram, joining hands and forming the bond to summon the demon. Alec right in between Magnus and Jace, a great scene to signify what he feels for his best friend and what may soon be coming with the attraction and connection towards Magnus.

The demon appears, but to returns Clary’s memories they must give payment. The Greater demon requests that they must relinquish a memory of the one they love the most. The demon takes a memory of Alec from Isabelle. (Which the others can all see by the way). A memory of Jocelyn from Clary, and revealing his feelings, the demon takes a memory of Jace from Alec.
Jace of course sees this with a confused face. Alec ultimately freaks out, not yet ready to accept his feelings, denying it, and breaking our hearts as we hear the pain in his voice, as his sister tries to comfort him, to help him, “It’s okay, Alec”.

Alec breaks the bond around the pentagram and they all go flying as Magnus tries to contain the demon with his magic. Alec tries to rectify his mistake but Jace stops him by shoving him out of the way before he can get hurt, the demon then grabbing hold of Jace. As Alec and Isabelle try to hang onto him, Clary’s left with no other option but to the kill the demon to save Jace and therefore losing her memories forever.

Clary kills the demon and Jace lays motionless on the floor. Alec distraught, blaming himself for what happened and thinking he’s the reason Jace almost died, walks away. Magnus supportively tells him, “There’s nothing to be ashamed of” as Alec struggles to accept who he is.

The episode ends with Simon somehow ending up back at Hotel Dumont, and with Clary using her magical necklace to try and see her mother. Instead she sees not just her mother but also her father Valentine, who tells her, “You want your mother? Give me the cup!” as she jolts away from the power of the necklace, pulling it off, and throwing it away from herself as she’s left with one thought in her mind… her mother.

What an exciting episode! What did you like best about it?