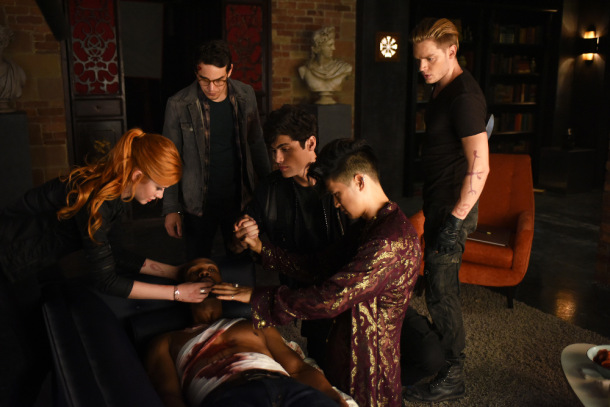 A recap of last week’s episode of ‘Shadowhunters’ titled ‘Of Men and Angels’.

Shadowhunters took us back to the beginning of the events that led us to where we are today. ‘Of Men and Angels’ opens with Clary and Simon urgently carrying in a wounded Luke to the only person who can heal him, our favourite warlock Magnus Bane, who has the powers to save him from his life threatening injuries.

Magnus makes time to put down a cloth on his couch to stop Luke’s blood from getting on it as Luke starts yelling incoherently as he goes into some sort of a hallucination… Luke frantically searching for Jocelyn when she appears, warning him that he must help Clary, that Clary is the key, and that he must tell her everything. It’s the only way to find the cup and to stop Valentine. We go into the opening credits as the alpha bite begins to affect Luke.

Back at the Institute Isabelle is reporting back to mother Maryse. Valentine’s men killed the Seelie scouts sent by the Clave, and now they’re considering switching sides. Simon struggling to focus on anything but the blood on his hands from Luke, he proceeds to compulsively taste it before quickly stopping himself. Luke needs an antidote to stop the poison that’s in his system but Magnus doesn’t have all the ingredients needed to make it.

Jace walks in opting to go get the ingredients as Magnus asks what happened to him, and Jace reveals Luke’s car may have found its way into a poll as he tried to park it (oh Jace). Simon and Jace argue over who should go as Magnus says he needs one more thing… Alec. Jace says he can’t do that as his and Alec’s relationship continues struggling as Magnus wittingly asks “trouble in paradise”.

Alec being just as stubborn as Jace refuses to call him as Alec and Isabelle’s father Robert walks in with younger brother Max. There’s a clear bond between the siblings as we see one of the first, rare, genuine smiles from Alec from seeing his brother.

Alec is put into a difficult decision, struggling with pressure from his family, following the rules, and doing what’s right. Magnus continues making the potion. A delirious Luke tries to tell Clary everything but is in no state so he makes Magnus promise to tell her. In search of the ingredients Jace and Simon get into a very tense, very heated conversion and some things are said.

For the first time we see Maryse with real emotion as Alec sees her upset. Alec reassures his mother that there is always something they can do to fix what is wrong, “We’re Lightwoods, we break noses and except the consequences… Tell me what you need me to do”. As Magnus begins to retell the story of the Circle, about Valentine and how her mother was by his side, and where it all began to Clary as we flashback to all those years ago…

We learn about how Valentine used to be different before he became the person he is today. Valentine viewed the Accords as a mistake, Shadowhunters protect and rid the world of demons and Downworlders are half demon. He didn’t see it as something they should do, they don’t make peace with demons. But Jocelyn saw the Accords as a way to keep the peace and that the Downworlders were also half human. Valentine’s goal was to ultimately destroy them all.

Magnus tells how Valentine fought to accomplish everything he’d wanted. To destroy the Accords, kill the Downworlders, and to secure the Mortal Cup in order to create a new Shadowhunter army. We see Valentine kill his own people to take the cup as a young Luke shows up to stop him. They fight but before Valentine can kill him, Jocelyn stops him. They also fight but she escapes, running away and vanishing along with the cup.

Luke continues to worsen and Magnus uses his magic to keep him alive. Isabelle reveals their parents are going to make Alec marry. They need a political alliance quickly to restore their family name and their influence with the Clave. Alec is furious that he’s getting married and Isabelle is being the diplomat that he believes is his job. Alec takes it out on Isabelle as he’s sick of giving up everything and he decides he’s had enough of their rules, and walks out in a storm.

Clary and Magnus are still waiting for Simon and Jace to return. Magnus is still using his powers on Luke, but he’s weakening. Magnus tries to hold on as long as he can but he starts to run out of magic just as Alec shows up. He runs to Magnus. Magnus asks for his help, “I need your strength”. Alec gives him his hand and says, “Take what you need” as their hands clasp with an undeniable powerful connection between the two.

Jace and Simon arrive back just in time. Clary mixes up the final part of the potion and gives it to Luke. It immediately takes effect as he heals and wakes up, as Magnus collapses onto Alec, weak and exhausted.

Clary and Alec share a rare moment as she says she’s happy him and Jace are okay. Alec admits he didn’t do it for Jace and Clary is glad Alec did it for himself. Jace hugs Alec, thanking him. Then Jace and Clary share a moment as she thanks him, growing closer together, Jace sweetly caressing her cheek. Which of course Simon walks in on as you can literally see his heart break. Simon and Jace are left standing alone but as Simon leaves Jace tries to speak but cant find any words.

Maryse goes to Isabelle and surprisingly apologises for being harsh to her, as we finally get to see some cracks form in the strong wall she’s put up. Luke now awake and alert tells his side of the story adding in the few details Magnus did not know.

Valentine grew distance, which pushed Luke and Jocelyn closer together. Valentine convinced they were having an affair, became obsessed with winning her heart back, willing to do anything he turned to experimenting with Downworlder blood, and has never been the same since. Luke tells how Valentine asked him to back him up on a mission, and then trapped him in a room with werewolves to kill him.

Clary still having no idea where the cup is, Luke tells her to look at the clues, to think. As Isabelle changes everything about herself to be the democrat and leader her family needs, to do what needs to be done. Magnus and Alec share a drink as Alec wonders why Magnus asked for him. “I wanted to see you again,” he says. Magnus opens up to Alec about how for a century he’s closed himself off to any man or woman. “You’ve unlocked something in me,” he tells Alec. They share a short moment, eyes locked, before it’s interrupted by ringing phone.

The episode comes to an end as Clary thinks Luke hasn’t told her everything that will help her to remember so she asks about the box with the initials J.C. on it. Luke reluctantly reveals that J.C. stands for Jonathan Christopher… her brother. Clary is completely shocked to hear this, but sadly Luke tells her that he died in a fire that their father set. When this is said Clary’s hand is on the box and it vanishes into the piece of paper underneath it, as Clary realises this power could be inherited and that she now knows where her mother hid the cup.

What did you think of the episode?