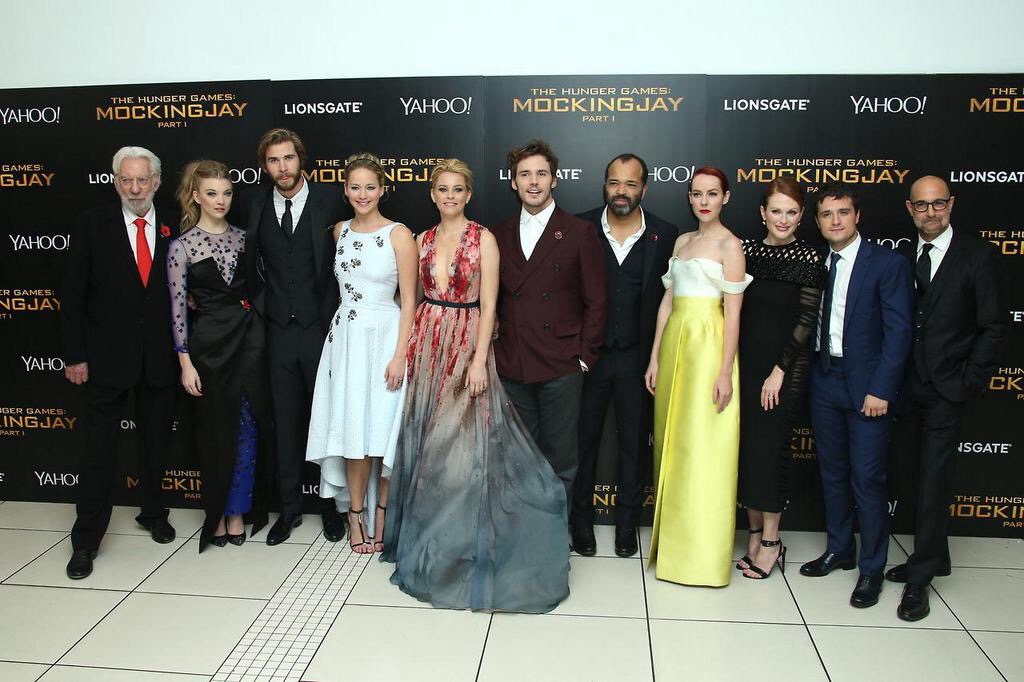 Well, Tributes, we are only 8 days away from seeing The Hunger Games: Mockingjay Part 1 on the big screen. The press tour for the promotion of the third film in the franchise kicked off last night with the world premiere in London in Leicester Square (or for those of us not living in the UK […]

Well, Tributes, we are only 8 days away from seeing The Hunger Games: Mockingjay Part 1 on the big screen. The press tour for the promotion of the third film in the franchise kicked off last night with the world premiere in London in Leicester Square (or for those of us not living in the UK in the morning/afternoon). Cast members in attendance were Donald Sutherland, Julianne Moore, Elizabeth Banks, Natalie Dormer, Stanley Tucci, Jeffrey Wright, Sam Claflin, Jena Malone, Liam Hemsworth, Josh Hutcherson and Jennifer Lawrence. Director Francis Lawrence was there as well as were the main producers of The Hunger Games films, Nina Jacobson and John Kilik.

Here are some highlights of the cast interviews from the London Premiere of The Hunger Games: Mockingjay Part 1

Jennifer Lawrence: I love Katniss’ courage and I mean I could just never imagine being that brave or face these things she has to face without crying every day. She’s awesome.

Elizabeth Banks: I love that she’s really devoted to Katniss Everdeen. Effie takes pride in being one of the people that Katniss can trust.

Jena Malone: I love her determination, her feistiness for life, and her energy is just so insane. It was just fun to feel that energy in me. She’s much more fierce than I am, so I got to channel my own inner fierce.

Sam Claflin: It’s all Annie Cresta, really, everything he does is for the love of his life and we all know what love feels like, you know. The truth of it is he believes in a better world. The thing is him and Katniss in this particular movie, they really seek solace in one another. They are the only two people that truly understand what the other’s going through, this time around. I think that’s why they become such close friends.

Liam Hemsworth: I think his deepest motivation has always been to support Katniss and you know, to provide as much courage and strength as he can for her and give her the courage to take on this role for the Rebellion. But I think a part of it is he wants to take down the Capitol and that’s a huge factor.

What are your thoughts about the film or your characters?

Natalie Dormer: I think Suzanne Collins writes really strong, complex, three-dimensional women and none more so than Katniss Everdeen and that’s been translated beautifully to the movies. And also it’s about treating young adults like adults. You guys could handle big themes, dark themes, complex human like stuff, you know which isn’t always great. Political, social, real stuff and stuff to do with your heart as well and finding who you are as you grow and your love and your losses. I mean the movies have everything. That’s what I love about the books and the movies, they don’t talk down to their audience.

Josh Hutcherson: Yeah, I mean for me, when I read the books in the beginning, Mockingjay is when Peeta gets hijacked, I was really looking forward to playing this. I mean everybody knows Peeta as being this sweet, caring, good guy and having this you know, caring, loving side to him and then he gets taken over by the Capitol and it changes everything so it was fun to play, hard but very fun to play.

Donald Sutherland: You know what Suzanne Collins wrote was a truth and it’s up to these young people out there to take advantage of the message these films posed upon them, so they try and correct the mess that my generation has made of this world because if they don’t, we’re lost.

Jeffrey Wright: I think that’s what’s special about these stories is that huge events happening around them particularly in this movie and society at war, but at the same time, they’re very personal story lines. And Beetee, yes he’s a part of the Rebellion, a very critical part of the Rebellion but there’s something very personal about the damage that he’s felt as a participant in the Games, as a member of the society that’s driving him. Likewise with Katniss, you know, Katniss is a hero, maybe seen as a political hero but at the same time I think she sees herself as someone who is a friend, much more loyal to home and loyal to love and trying to protect that she holds dear, particularly in this story trying to pay honor to her responsibilities toward Peeta. So there are things that we can all respond to, these universal themes in spite of the grandeur of the storytelling, that really make it personal for us as actors and I think for the audience as well.

What are you most proud of?

John Kilik: I’m just so proud of my partner Nina Jacobson and that the two of us have been able to shepherd this along for the last 4, 5 years. Each time we’ve tried to raise the bar, to give the fans more, to do the books justice and the preceding films and they build on each other each story, more intensely. This one grows beyond the arena to the entire country, there’s a lot at stake and is still incredibly personal: relationships, family, sisters and a great love story, too.

Liam Hemsworth: Everything, everything. I mean I feel so fortunate to have worked with these people and worked with an amazing director like Francis and create something special that people really care about.

Anything you want to say to the fans?

Jennifer Lawrence: Thank you guys, we love you and you’re who we make the movie for. So I hope you like it.

Elizabeth Banks: I just want to say the devotion of these fans all around the world, we love it, and this is why we do this, that’s why we’re here for you guys tonight. We really are absolutely thrilled by the reception of these movies. It’s overwhelming and amazing.

Francis Lawrence: I would say thank you to all the fans for being supportive of the franchise, so supportive of me coming aboard the franchise, it means a lot. You know we all, I’m speaking for me, the cast, the producers, the crew, and we make these movies for you guys. We really care about what you think and we want you guys to love it. I really think you’re going to love it and we can’t wait for you to see it.

Nina Jacobson: The fans, they never cease to move me and amaze me and they are the best fans anyone can hope for. They feel this material so deeply and understand it so well. You know, we’re so blessed that we have such committed and devoted fans in more than a superficial way.