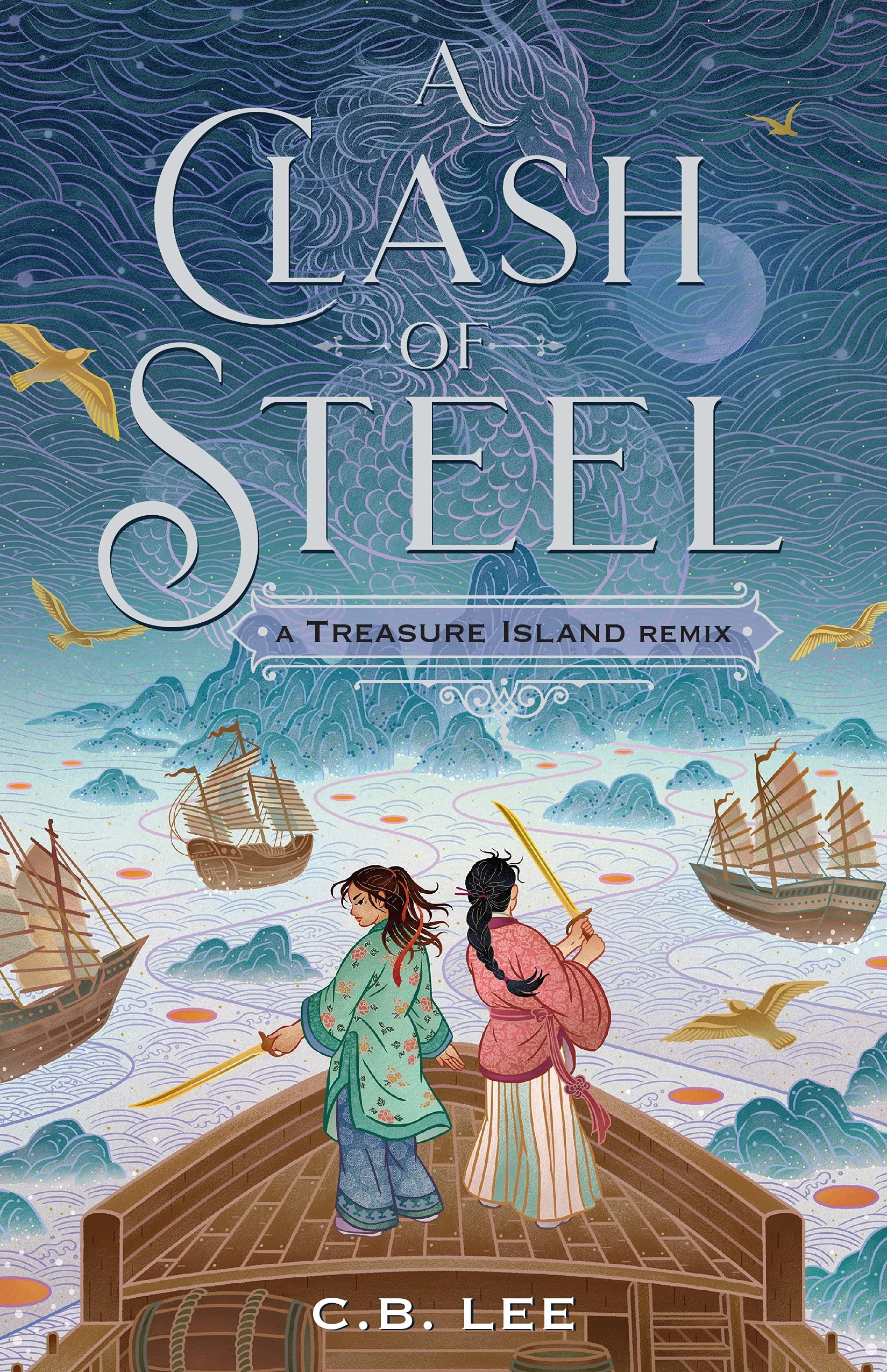 REVIEW: ‘A Clash of Steel’ by C. B. Lee is an enchanting remix of a classic

A YA novel featuring sapphic pirates for every reader’s needs!

C.B. Lee takes on remixing the well-known tale of Treasure Island in A Clash of Steel and it’s magnificent. A story featuring sapphic pirates that are on the search for missing treasure but find so much more.

1826. The sun is setting on the golden age of piracy, and the legendary Dragon Fleet, the scourge of the South China Sea, is no more. Its ruthless leader, a woman known only as the Head of the Dragon, is now only a story, like the ones Xiang has grown up with all her life. She desperately wants to prove her worth, especially to her mother, a shrewd businesswoman who never seems to have enough time for Xiang. Her father is also only a story, dead at sea before Xiang was born. Her single memento of him is a pendant she always wears, a simple but plain piece of gold jewelry.

But the pendant’s true nature is revealed when a mysterious girl named Anh steals it, only to return it to Xiang in exchange for her help in decoding the tiny map scroll hidden inside. The revelation that Xiang’s father sailed with the Dragon Fleet and tucked away this secret changes everything. Rumor has it that the legendary Head of the Dragon had one last treasure—the plunder of a thousand ports—that for decades has only been a myth, a fool’s journey.

Xiang is convinced this map could lead to the fabled treasure. Captivated with the thrill of adventure, she joins Anh and her motley crew off in pursuit of the island. But the girls soon find that the sea—and especially those who sail it—are far more dangerous than the legends led them to believe.

Xiang is a sixteen-year-old girl growing up in a quiet village. She has a peaceful life there where her days are spent studying and reading about adventures she can only imagine. She yearns for a life that she isn’t sure she’ll ever get to have because her mother is determined to keep Xiang safely tucked away in the village.

The moment arises where Xiang has an opportunity to propose going to Canton with her mother. Xiang claims she wants to help her mother run her successful business there, and she’s ready to prove that she can follow in her footsteps. Reluctantly, her mother agrees that Canton might just be the perfect place for Xiang.

The pacing at the beginning of the story is slow as we learn about Xiang and her background. There’s a lot of backstory to this world through her eyes. I didn’t necessarily find this to be a bad thing but compared to the rest of the story it felt lacking, even with all the world-building.

I enjoyed getting to know about Xiang. She’s a character I think many readers will resonate with. Especially when it came to her wanting more than the life she felt she was supposed to live. She’s brave and the way she paves her own path is inspiring.

Shortly after arriving in Canton, Xiang crosses paths with a girl named Anh who she is instantly fascinated with.

This is when the pace starts picking up. After stealing Xiang’s pendant, Anh returns it and reveals that there was a hidden map inside and now she needs her help decoding it. Xiang sees this as not only an opportunity to finally see the world she’s always wanted to but to also prove herself to her mother.

The girls set off to sail with Anh and her misfit crew.

I am a huge fan of the found family trope in YA and was so happy to see it present in A Clash of Steel. It warmed my heart! The crew Xiang finds herself living with at sea is different from the one that sails with her mother. They don’t feel like a robotic team but like a real family. They laugh at inside jokes, smile at one another, and most importantly take care of each other. Xiang becomes a part of this crew and she almost wishes she never has to return to Canton.

Xiang and Anh grow closer to one another and their romance is a very sweet first-love story. Where Xiang is a dreamer, Anh is a realist and their connection is so interesting. If there is no one else in the world they can trust, they quickly learn that they can at least count on each other.

More adventure comes as the story progresses. C. B. Lee’s writing is beautiful and inviting. Lee took on writing about one of the most notorious pirates, who was also a woman, Zheng Yi Sao. I loved the rich history behind this story and learning more about this period of time and Zheng Yi Sao. At times I wish we got to see more behind her character, but what we did see was captivating.

A Clash of Steel was such a well-written story with great representation. It mixes history and fiction well to take readers on a fun adventure. There’s a lot of heart inside of this book. These characters are sure to show readers how important it is to write your own story, no matter what the world demands of you.