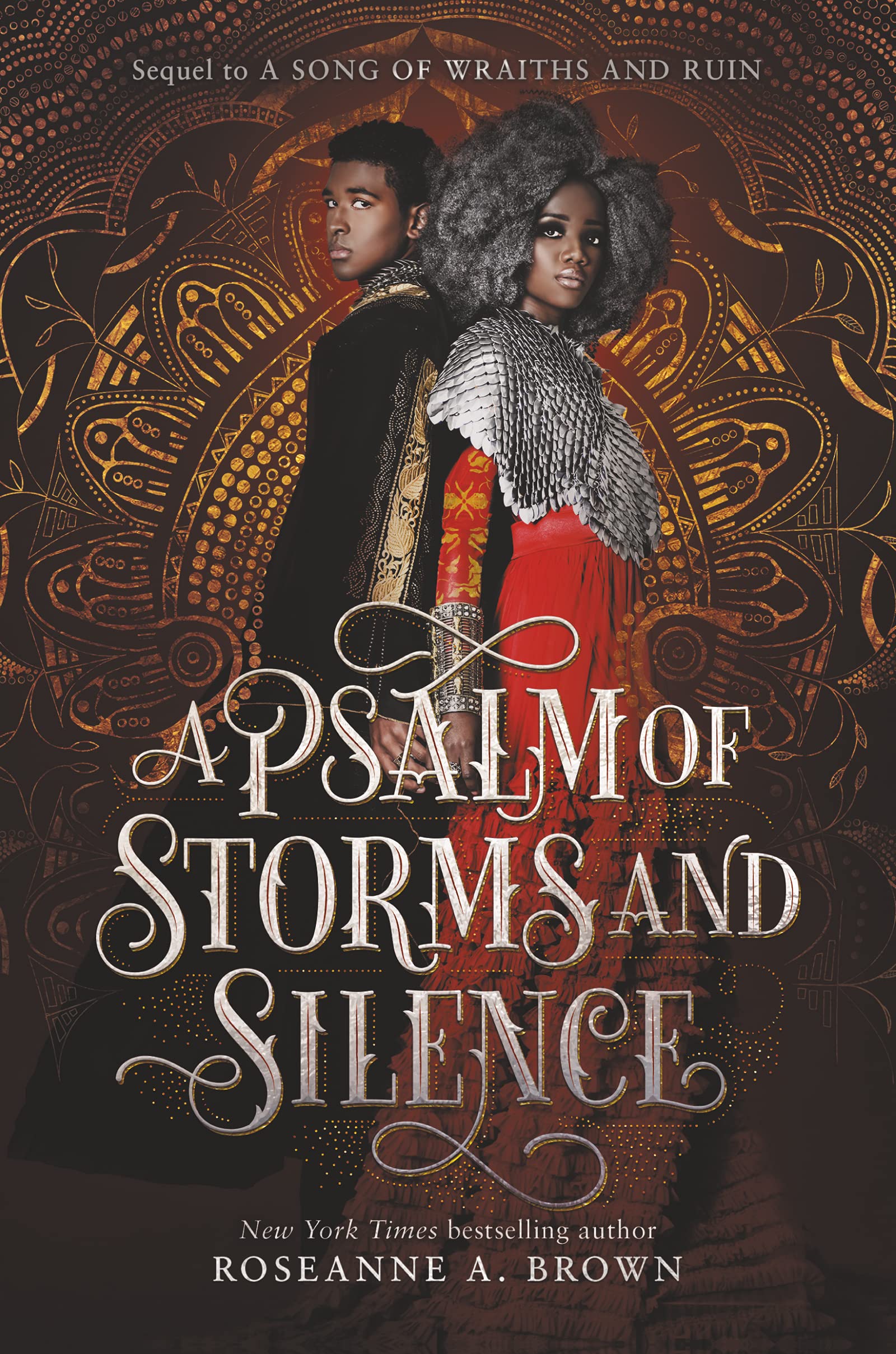 'A Psalm of Storms and Silence' by Roseanne A. Brown (Balzer + Bray)

REVIEW: ‘A Psalm of Storms and Silence’ by Roseanne A. Brown was a powerful sequel

Karina and Malik must face their history in order to move forward.

A Psalm of Storms and Silence by Roseanne A. Brown is ultimately a tale of victims finding ways to heal.

Karina lost everything after a violent coup left her without her kingdom or her throne. Now the most wanted person in Sonande, her only hope of reclaiming what is rightfully hers lies in a divine power hidden in the long-lost city of her ancestors.

Meanwhile, the resurrection of Karina’s sister has spiraled the world into chaos, with disaster after disaster threatening the hard-won peace Malik has found as Farid’s apprentice. When they discover that Karina herself is the key to restoring balance, Malik must use his magic to lure her back to their side. But how do you regain the trust of someone you once tried to kill?

As the fabric holding Sonande together begins to tear, Malik and Karina once again find themselves torn between their duties and their desires. And when the fate of everything hangs on a single, horrifying choice, they each must decide what they value most — a power that could transform the world, or a love that could transform their lives.

The book picks up soon after A Song of Wraiths and Ruin ended. Karina is on the run, Hanane is adjusting to her new circumstances, Farid rules in her stead with Malik as his apprentice.

After what happened, Karina’s grown more insecure. Lacking a solid support system for the beginning of the book, she lets her failures get the best of her at times and acts impulsively at others. It’s only once her every hope is dashed that she embraces those failures and allows herself to be vulnerable around others again, growing into the strong princess she only pretended to be in the first book.

Malik’s character also takes a turn for the worse before he works towards redemption. Farid represents everything Malik ever wanted in a father figure, so he becomes increasingly desperate to please him, even enduring violent abuse for it. This need to please also leads him to commit increasingly questionable acts on Farid’s behalf, especially once he learns to better harness his powers. His constant struggle not to give into to the lure of power leads him to use self-inflicted pain to ground him because he, too, doesn’t believe he is allowed to be vulnerable around others.

Because of all these factors, Karina’s and Malik’s relationship becomes a mess. Despite being enemies, they are still connecting and appear in each other’s dreams, which gives some amusing results. Malik only keeps her at a distance because of Farid, with a weakening resolve, but it takes a lot for Karina to look past his betrayal. A lot of factors go into them coming together again in one of the more interesting romances I’ve come across in YA. The end of their love story was well worth everything they went through for each other.

The character that surprised me the most was Hanane. What I thought would be the big villain turned into a loveable, compassionate character despite the darkness lurking within her. The more Malik’s sisters brought her out of her shell, the more she grew on me. I also found her character arc to be the best, as she had to learn to recognise the signs of grooming and abuse before she could grow beyond them.

A Psalm of Storms and Silence by Roseanne A. Brown is not a gentle book. A trigger warning at the beginning summarises the heavy topics Brown explores in her work because it’s ultimately about the characters recognising, understanding, and facing past abuse. Malik’s anxiety from the last book spirals out of control as he is put under further pressure, while Karina and Hanane must face the ugly truth of their childhood. While it’s not pleasant to read through, Brown does justice to each character without rushing the process.

While the story may be largely character driven, this book’s plot was even more engaging than the first. Karina’s journey was the most plot-heavy, as she frees prospective slaves only to get captured by a deserter and his peculiar friend which leads her to set off on a search for a lost, mythical city to save Sonande. Malik’s journey is far more political as he glimpses Farid’s increasing machinations. They balance each other well, giving the book an excellent pace before the action takes off in the last third.

Being her second book, Brown’s writing has only gotten better. Her descriptions pulled me in and brought Sonande’s different regions to life. Now that Karina can travel, Brown’s world becomes all the more expansive. We travel through canyons, mountains and jungles throughout the story and meet the diverse groups of people that make up the continent. Through Malik, Brown builds on the place’s history, how two headstrong women’s impact is still felt thousands of years later. She builds a fascinating story where betrayal and sacrifice echo through its history in a cyclical fashion.

I flew through A Psalm of Storms and Silence. This sequel took an interesting story to new heights giving it a dynamic, fascinating conclusion that examines the consequences of a never ending cycle of violence and encourages the participants to break it. While I liked the first book, I loved this one and I recommend it wholeheartedly.