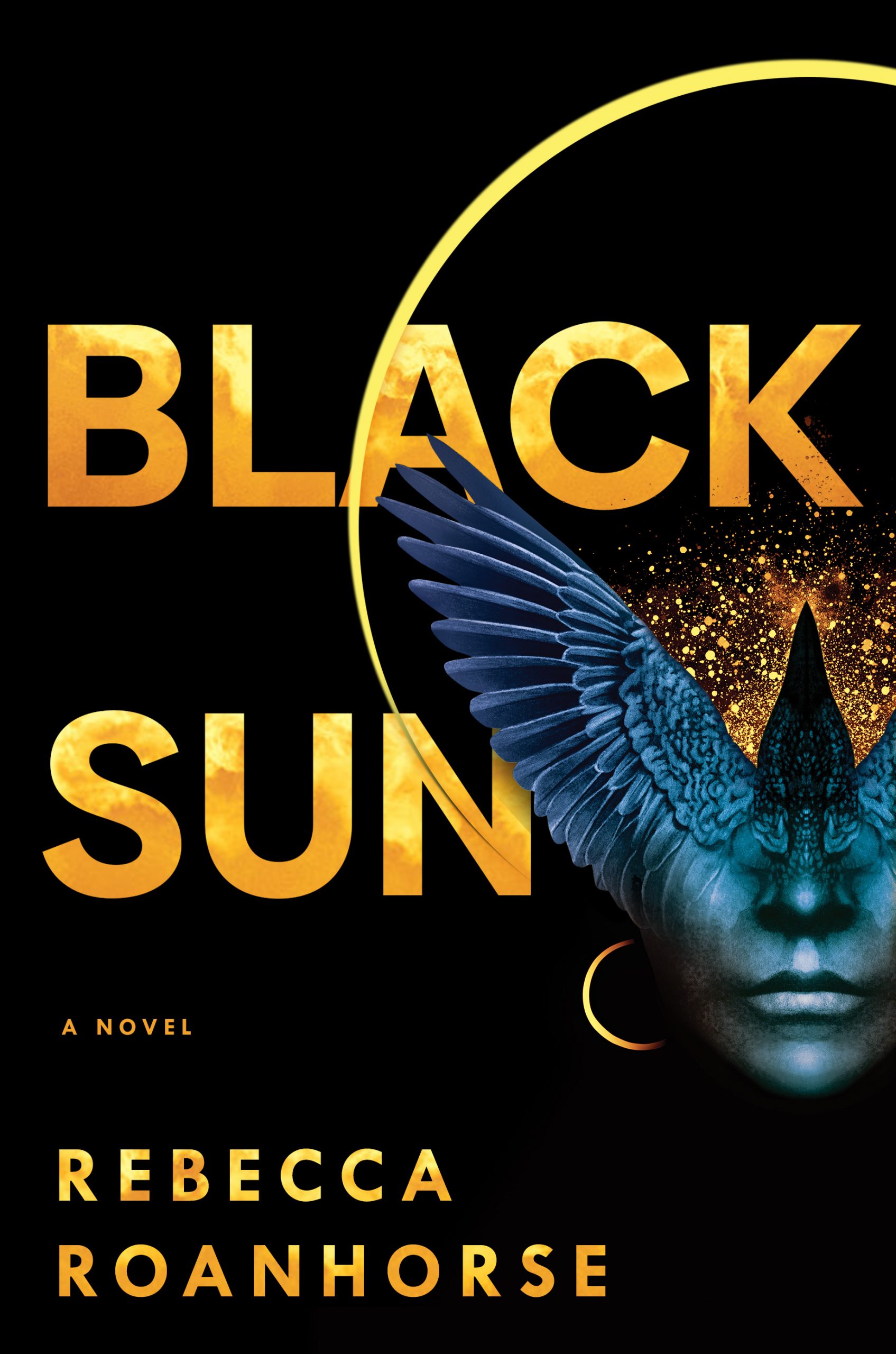 A rare solar eclipse brings Tova to the edge of a cliff, with little knowledge of what comes next.

In the holy city of Tova, the winter solstice is usually a time for celebration and renewal, but this year it coincides with a solar eclipse, a rare celestial event proscribed by the Sun Priest as an unbalancing of the world.

Meanwhile, a ship launches from a distant city bound for Tova and set to arrive on the solstice. The captain of the ship, Xiala, is a disgraced Teek whose song can calm the waters around her as easily as it can warp a man’s mind. Her ship carries one passenger. Described as harmless, the passenger, Serapio, is a young man, blind, scarred, and cloaked in destiny. As Xiala well knows, when a man is described as harmless, he usually ends up being a villain.

Black Sun by Rebecca Roanhorse starts off very strong by throwing the reader into the thick of the ritual meant to turn Serapio into the Crow God. Roanhorse sets a steady pace throughout the first half, with the many action scenes being balanced out well. Around the halfway mark, the book lulls a little but it quickly picks back up once Xiala and Serapio arrive at Tova. Even with this dip in the pacing, the plot was still intriguing enough to keep me hooked, while it gets even more interesting after that. Once all our protagonists are in Tova, the events leading up to the climax are underscored by a sense of danger and anticipation until the day of convergence when Roanhorse delivers a showstopper.

Roanhorse sets her story in a world deeply inspired by pre-Columbian Native American culture, which was wonderful to experience for the first time. She starts by building up the world around each protagonist before delving into their own group’s backstory. Through Naranpa, the reader gets to experience both the city of Tova and its underbelly, whereas Xiala introduces us to the Cuecola and Teek ways, one through direct experience while the other through stories and memories. Whereas through Serapio, we get a direct look at what it take to be a god’s vessel. All this comes together to build a grand setting that feels alive at every turn. Roanhorse spent a lot of time on each location of the book, even the open sea, and it shows brilliantly.

Her excellent writing extends to her characters. Xiala is an impulsive and often drunk firecracker of a character, in contrast to Serapio who has had to learn to be calm and measured no matter what he faces, while Naranpa contains both traits as she never entirely forgot her thieving origins when she joined the priesthood. Despite Naranpa and Serapio being at odds with each other, I couldn’t help rooting for both of them and even more for Xiala.

Black Sun’s secondary characters are just as important to the story, and add to the world’s richness, especially those that occasionally get their own POV. Okoa gives the readers a deeper look in Carrion Crow’s political scene, however brief it is, whereas Zataya’s POV introduces the readers to a whole new type of magic that will undoubtedly come back in the sequel.

Black Sun by Rebecca Roanhorse also includes a host of LGBTQ+ characters. Xiala’s sexuality is never explicitly labelled but she makes no effort to hide her attraction to all genders, even when it gets her in trouble for a night early on in the book. Roanhorse also includes several secondary characters that are non-binary, using different pronouns, even neo-pronouns, that are perfectly integrated within the story. As a reader, I’ve never come across a character using neo-pronouns, so Black Sun was eye-opening in that respect.

Overall, Black Sun breathes new life into a genre often dominated by a cultural setting inspired by western European history. Her characters are memorable, her plot kept this reader hooked, and the world was so rich that I can’t wait to read more.