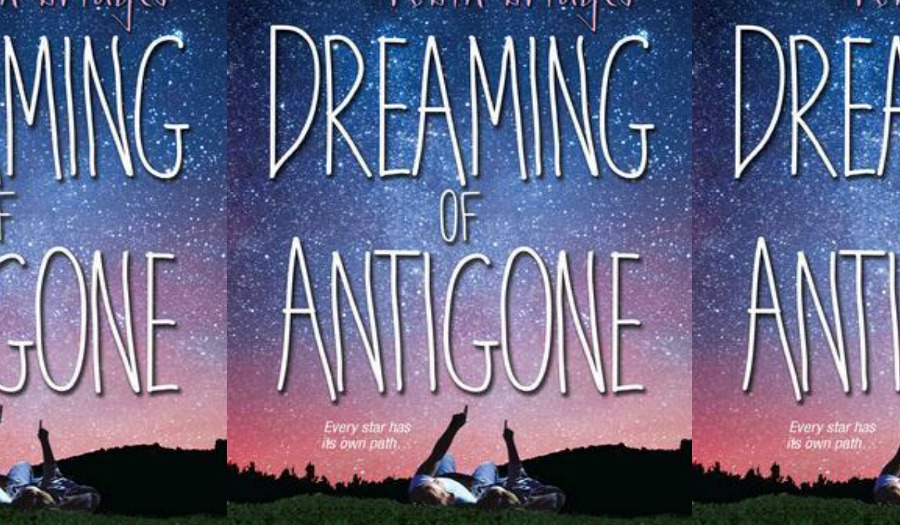 ‘Dreaming of Antigone’ is a beautifully written story by Robin Bridges. It deals with tough issues, and shares a hea

For me, there are several types of contemporary novels. Some are fun and light reads, and some dig deeper to bring out those strong emotions from within. Then there are ones that are somewhere in between both of those, and that is where Dreaming of Antigone falls.

“I can’t ever be the blazing star that Iris was. I’m still just a cold, dark satellite orbiting a star that went super nova.”

Andria’s twin sister, Iris, had adoring friends, a cool boyfriend, a wicked car, and a shelf full of soccer trophies. She had everything, in fact – including a drug problem. Six months after Iris’s death, Andria is trying to keep her grades, her friends, and her family from falling apart. But stargazing and books aren’t enough to ward off her guilt that she – the freak with the scary illness and all-black wardrobe – is still here when Iris isn’t. And then there’s Alex Hammond. The boy Andria blames for Iris’s death. The boy she’s unwittingly started swapping lines of poetry and secrets with, even as she tries to keep hating him.

Heart wrenching, smart, and bold, Dreaming of Antigone is a story about the jagged pieces that lie beneath the surface of the most seemingly perfect life.. and how they can fit together to make something wholly unexpected.

Dreaming of Antigone was a beautiful story. We first meet our main character, Andria, while she is having a nightmare about her sister Iris. Immediately we feel this guilt that is weighing on Andria as she reflects on her twin sister’s death.

Andria immediately pulled me into this story. It’s been six months since Iris’s death and as we begin to see more of Andria’s life now it’s clear how different she is from her “perfect” sister. She’s a bit of an outcast who enjoys keeping to herself, but she’s also smart, kind, and even a bit sarcastic. She is easy to love but has her flaws, and isn’t dealing with Iris’s death as well as her family and friends seem to be.

Wherever she goes Iris is always in her thoughts because just like her family, Andria’s friends were her sister’s friends too. They all seem to be dealing with their own grief in different ways. I enjoyed learning about all of the characters, especially Trista and Natalie, and all of them bring something to this story in a way to represent different stages of grief.

As the story continues, we are introduced to another character who was Iris’s boyfriend when she passed away. Alex Hammond is back from rehab and unfortunately back in Andria’s life, which doesn’t make her happy since he’s the one she blames for her death. I probably shouldn’t have liked him in the beginning but there was something about him that pulled me in. There was more to him than what met the eye, and Andria notices this too.

The two of them become close as they share a mutual bond over poetry. Which I loved how Robin Bridges was able to incorporate poetry into this story. Their relationship grows into something more than just frenemies and I enjoyed their interactions when they were able to communicate some tough discussions through poetry they enjoyed.

Of course there is a lot of drama as the story continues, but this drama found a way to help us understand these characters a lot more. Then we learn the truth surrounding Iris’s death and everything begins to make more sense. This book deals with some tough issues such as Andria’s epilepsy, suicide, abuse, and depression. I’ve been reading a lot of books that deal with similar issues and I appreciated the way each were portrayed through this story.

As the truth comes out we learn that not everyone is actually dealing with their grief as well as they pretended to be. They are finally forced to deal with their past though and find a way to truly move on from Iris’s death. It was a little heartbreaking at times, but the story wraps up in a beautiful way. We saw grief at its best through these characters. We saw each of them evolve into more than who they were in the beginning.

This was my first book that I’ve read from Robin Bridges, and I have to say that I’m now a fan because her writing was absolutely beautiful. It was able to pull me in from the first page and made this book enjoyable and easy to understand.

Overall, I really enjoyed this book. There were a few things I didn’t agree with when it came to the romance, like when two people should be together simply because they can “fix” each other. This was a flaw I overlooked though because this book was a good representation of grief and truly being able to move on.

I would recommend this book to anyone who enjoys contemporaries! Dreaming of Antigone will be released on March 29th, so make sure you grab a copy then!

Dreaming of Antigone managed to have a great concept and the plot was good, but there were a few flaws. The beautiful writing makes up for the things that I didn’t connect to though. I enjoyed all of the characters, who make this story truly come alive. Overall, this book was a good representation of the tough issues it dealt with but I still wanted more development.

Related:
ya • ya lit