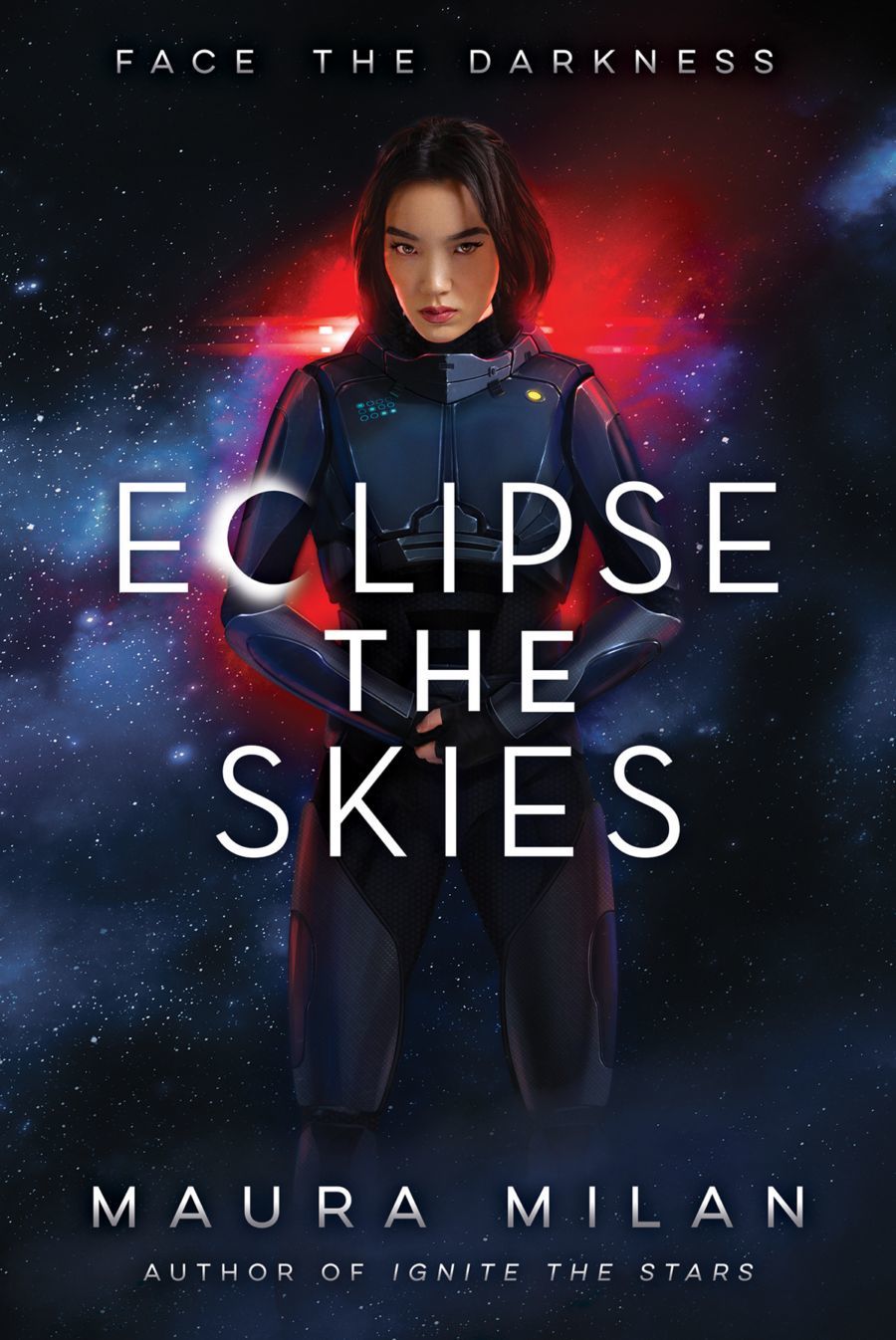 REVIEW: ‘Eclipse the Skies’ by Maura Milan sets the stage for an epic conclusion to this series

Maura Milan packs the punches and sends readers on a thrilling adventure through space in ‘Eclipse the Skies’!

Is there ever a clear side to choose from when a war begins? Maura Milan takes readers inside the minds of her characters to answer this question.

Ia Cocha never thought she’d be working for the Olympus Commonwealth. But that was before she found out her trusted brother Einn was trying to tear apart the universe. No, Ia, the Blood Wolf of the Skies, has agreed to help the Royal Star Force on one condition: when she finds him, she gets to kill Einn herself.

Brinn Tarver has just come to terms with her Tawny identity when the public lashes out against her people, crushing her family. At her breaking point, she starts to question everything she believes in – including Ia.

After the death of his mentor, Knives Adams is doing his best to live up to a role he didn’t ask for as Aphelion’s new headmaster. Still, with each new step deeper into war, he feels torn between his duties and the pull of Ia’s radical – sometimes criminal – ideas.

As they fight to keep darkness from eclipsing the skies, their unpredictable choices launch this breathtaking sequel to explosive new heights.

Eclipse the Skies begins right where Ignite the Stars left off. After her brother tried to kill her, Ia is now fighting with the Olympus Commonwealth to take him down. Brinn is loyally by her side and Knives has just been appointed as the headmaster of Aphelion. All three of their lives have completely changed. They’re filled with both anger and grief for the people they once were.

The plot moves at a slow pace but this allows readers to dive deep into the motivations of each character. Ia, Brinn, and Knives are the best part of this series and Maura Milan develops them so well in Eclipse the Skies. Without giving away spoilers I will say that they each end up broken in different ways. And when they are at their lowest they start questioning whether any of this is worth the pain. How large of a role do they play in this war? Do they believe in what they’re fighting for? Ultimately, they each fight for themselves, hoping they’ll save their people along the way.

It’s inspiring to read through each of their POV’s, and readers are sure to relate to one of them. Especially considering the way the plot and politics correlate with our own world. This made Eclipse the Skies intriguing to read, as well as a bit heartbreaking when things hit too close to home. I applaud Maura Milan for exploring these topics, though.

This book is a lot darker than the previous one. I was somewhat disappointed because it’s missing that spark that made Ignite the Stars different from other sci-fi books. But, after finishing it, it made perfect sense why Maura Milan chose to tell the story in a different way this time around. With the slower plot it became a more character-driven story and everyone was well written — even the ones deemed evil.

Eclipse the Skies will take readers on a gripping adventure! There are many twists sprinkled throughout to enjoy and the final act of this book is all action, which was a lot of fun to read. I’m personally torn on the ending of this series and I think a lot of readers will be as well. It’s gut wrenching and beautiful at the same time. Prepare your heart for a great conclusion to this fantastic series!

A fun mix of space and sci-fi.

Compared to Ignite the Stars I would say that Eclipse the Skies is a lot darker and more heartbreaking. The plot moves at a slower pace allowing Maura Milan to develop each character more and let readers explore this fantastic world she has built. Milan does a great job executing the conclusion to this series with every detail she pours into this story. Readers are sure to be split on loving or hating the ending so I recommend preparing your heart now!