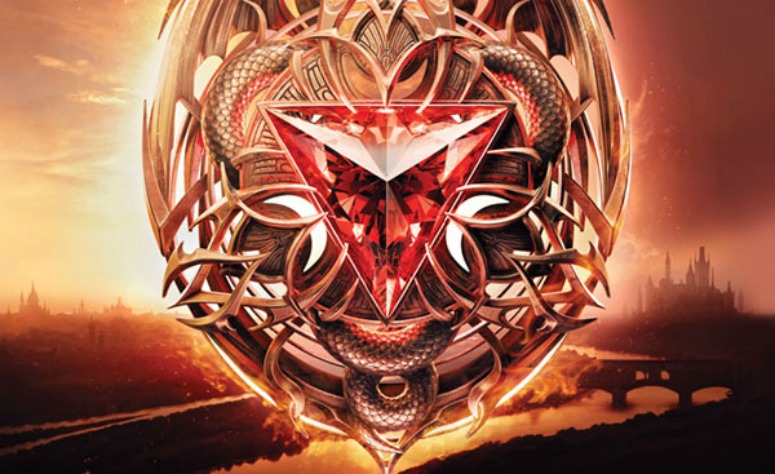 Flamecaster shows a promising beginning to what’s sure to be a brilliant fantasy series! This book is full of dark magic, brutal action, and brave characters all set in an intriguing world.

Adrian sul’Han, known as Ash, is a trained healer with a powerful gift of magic – and a thirst for revenge. Ash is forced into hiding after a series of murders throws the queendom into chaos. Now Ash is closer than he’s ever been to killing the man responsible, the cruel king of Arden. As a healer, can Ash use his powers not to save a life but to take it?

Abandoned at birth, Jenna Bandelow was told that the mysterious magemark on the back of her neck would make her a target. But when the King’s Guard launches a relentless search for a girl with a mark like hers, Jenna assumes that it has more to do with her role as a saboteur than any birth-based curse. Though Jenna doesn’t know why she’s being hunted, she knows that she can’t get caught.

Eventually, Ash’s and Jenna’s paths will collide in Arden. Thrown together by chance and joined by their hatred of the king, they will come to rescue each other in ways they cannot yet imagine.

Set in the world of the acclaimed Seven Realms series a generation later, this is a thrilling story of dark magic, chilling threats, and two unforgettable characters walking a knife-sharp line between life and death.

This book starts off strong. We first meet our two main characters, Ash and Jenna, when they are around 12 years-old and living very different lives from one another. Ash is the son to the queen of Fells, a healer in training, and is on his way to becoming very powerful. Jenna, even at her young age, already works in the mines of Delphi where life is anything but grand. I was completely intrigued by these characters, and learning about their pasts made me root for them even more.

Their back story helps us understand who they now are as young adults living under the rule of King Montaigne, who they both despise. This is when the story becomes a bit slow, but it was still interesting because we learn more about these characters and their world.

Ash and Jenna are our main characters of the story, and they are both strong in their own way. Jenna is brave and intelligent. She has all the great qualities of a heroine because she is completely selfless. Then there is Ash, who is magical, powerful, and intelligent in his own right.

I enjoyed how Cinda Williams Chima decided to tell this story because we don’t only get their POV, we also get 2 more POVs throughout the book. The other 2 characters are Lila and Destin Karn, who I absolutely loved! Lila is smart, brave, and the type of girl to kill first then ask questions later. Now, Karn was my favorite out of the 4 characters because he was the most complex and interesting. He works for the king and yet he has a good heart, and isn’t afraid to show it.

We meet a lot of different characters, and all of them help progress the story along. Eventually all 4 of our characters end up at the same place with different agendas. Their individual plots intertwine nicely and it was hard not to enjoy this story-telling from Chima. This was my first book that I’ve read by her and I loved how detailed everything was without it ever becoming too heavy. The world building was brilliant and helped this world truly come alive.

Chima didn’t seem to be afraid of going too brutal with the action scenes and I really appreciated this, especially at the end of the story. It all wrapped up nicely in order to set up a strong future for the rest of this series. Which, towards the end we are introduced to my favorite character so far, Evan Strangward, who we can already tell will play a huge role in the next book, and I can’t wait to read it because he’s definitely more than what meets the eye.

It’s hard to share a lot about this book without spoiling it for you, but I can tell you that it’s very intriguing. These characters are all interesting in their own way, there’s a lot of magic, and it’s all about revenge. It’s clear that these characters are constantly walking the line between life and death while trying to keep the darkness under control.

The only downfall to this book was the romance. The insta-love is real in this book. I wouldn’t have minded that these 2 characters were together if it was paced slower than them meeting and instantly being smitten with each other. I felt like the story would’ve been told better without them being in actual love with one another, and everything would’ve still made sense. It doesn’t play a huge role in the story though, so trust me when I say it’s easy to look past in order to still enjoy the book.

Overall, I enjoyed this book. I think it’s a strong start to the series. It built up this world, especially for those who haven’t read anything else set in the Seven Realms, and brought in some interesting characters. The magic and the politics were a lot of fun to read, too. I would recommend this book to anyone who enjoys a great fantasy read!

I read a lot of fantasy novels, and Flamecaster didn’t disappoint on having an interesting and unique plot. The strongest element to this book was Chima’s writing, which was beautiful and really brought this world to life. Although I did enjoy the characters, only a few of them were truly complex and I would’ve liked to see them developed more. Overall, this story was good and I thought the characters’ thirst for revenge and trying to still be good people was very intriguing.