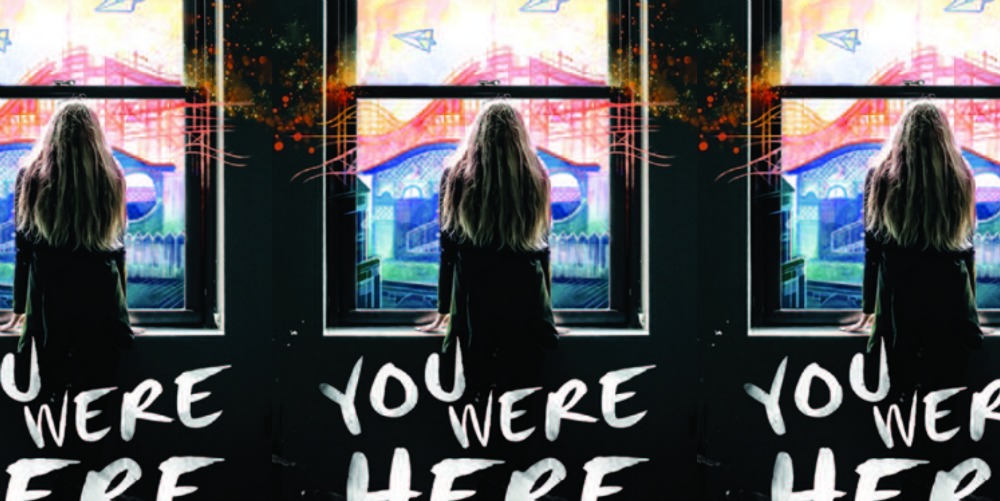 REVIEW: You Were Here by Cori McCarthy

You Were Here manages to be a fun, adventurous story while being able to tackle tough issues such as heartache, grie

You Were Here manages to be a fun, adventurous story while being able to tackle tough issues such as heartache, grief, and anxiety. I easily fell in love with these characters and their story.

Grief turned Jaycee into a daredevil, but can she dare to deal with her past?

On the anniversary of her daredevil brother’s death, Jaycee attempts to break into Jake’s favorite hideout – the petrifying ruins of an insane asylum. Joined by four classmates, each with their own brand of dysfunction, Jaycee discovers a map detailing her brother’s exploration and the unfinished dares he left behind.

As a tribute to Jake, Jaycee vows to complete the dares, no matter how terrifying or dangerous. What she doesn’t bargain on is her eccentric band of friends who challenge her to do the unthinkable: reveal the parts of herself that she buried with her brother.

It’s the night of Jaycee Strangelove’s (yes that is her real last name) high school graduation, which happens to be the anniversary of her brother, Jake’s death. Jake was a daredevil and on that tragic night that was what ended up costing him his life. We find Jaycee at the playground where Jake died. Her grief has destroyed her and has led her to feeling like an outcast. She climbs up to recreate the dare that cost her brother his life, and as my heart thumped loudly we soon find her ending up being okay, physically that is, when the last people she would have ever expected to show up. . . do.

After being introduced to Jaycee, we are quickly introduced to all of our characters on this special night of theirs. Natalie, Zach, Bishop, and Mik’s stories begin to intertwine with Jaycee’s story as we see all of them adventure into Jake’s favorite place to break into, The Ridges. I instantly felt connected to all 5 of these characters. They all felt refreshingly real. Each are broken and lying to themselves about who they truly are underneath the mask they put up, and this is why I was able to feel so connected to them. I may not be dealing with the same issues these characters are, but it was easy to feel their pain while feeling my own and seeing how easy we choose to mask our past with who we truly are inside.

So, to say that I enjoyed these characters is an understatement because I fell in love with each of them. Jaycee ends up finding Jake’s old map of all his urban explorations, and in hopes to feel closer to her brother she becomes determined to go to all of these places. What she doesn’t expect is for the 4 people who joined her the last time would want to come along with her. They each are determined for their own reasons though and end up tagging along with Jaycee on her mission.

As they begin their adventures to places such as the Moonville Tunnel, Randall Park Mall, and the Gates of Hell (which are all real places, you can look them up) we begin to really get to know our characters more. Like I said, they each have their own agenda for joining in on this journey and slowly we see what that is for each of them. I’m not going to give too much detail but I will tell you that they are dealing with tough issues such as guilt, heartache, depression, abuse, anxiety, and more. There were many emotions that I felt for these characters who were completely broken in their own way.

Their adventures were a lot of fun though, even when this book dealt with those tough issues it still found a way to be adventurous and funny. Of course they make some dumb decisions and there is some drama but it brought light to the story, and was entertaining. Jaycee, Natalie, Zach, Bishop, and Mik begin to find more of themselves as they grow closer to one another. There are some books that force friendships on the readers, but I’m happy to say that theirs didn’t feel forced at all. It was genuine, natural, and I loved it.

There was even a bit of romance woven into the story. I didn’t care for one relationship because it was a bit dysfunctional, but in the end it only helped these characters grow so I ended up appreciating it for what it was. Then there was the sweet, swoon crushing romance between Jaycee and Mik that left me completely falling in love with their love. It all blended well into the story.

As the story progresses, there are a lot of revelations and truths that come out. This book really brings out the emotions when we find out more about what happened the night of Jake’s death, and how it truly affected everyone in the story. It was a lot to handle because I had already felt so connected to all of these characters. This was all thanks to the brilliant writing from Cori McCarthy though. Her writing was absolutely beautiful, and she wrote such great characters who were completely complex, and each were able to grow within this one summer together.

The last place they venture to is Geauga Lake, which was the coolest place, and brings the story of these 5 unlikely friends to a close. I loved how it ended, and it left me feeling a lot of hope within myself.

Overall, I really enjoyed this book. There was great chemistry between these characters who are so easy to love, and they live in such a realistic world that you can’t help but appreciate all of the little details woven into the story. The writing is great, and I have to point out the unique way McCarthy chose to tell this story. We get all 5 of the characters’ POVs, Bishop’s is told through his artwork and Mik’s is told through comic strips. It made it fun to read, so many props to the illustrator as well!

Like I said, this book left me feeling a lot of hope within myself. What I found from this story was how it is okay to be you with all the baggage from your past. You can carry a piece of everything that has happened in your life, good and bad, and still be true to who you are. You don’t have to run away from everything that makes you the person you truly are.

I would recommend this book to anyone who enjoys contemporaries, or is looking for an emotionally strong story! You Were Here will be in stores tomorrow, March 1st, so make sure to grab it then!

A fun but serious read

You Were Here was a beautiful coming-of-age story full of adventure and manages to tackle tough issues in a great way. Cori McCarthy’s writing was beautiful, and I love how she chose to tell this story. There are awesome illustrations included to help make this reading experience fun. You’ll easily fall in love with these characters, even if they make dumb decisions. I promise you’ll find a bit of yourself after reading this special story!

Related:
ya • ya lit