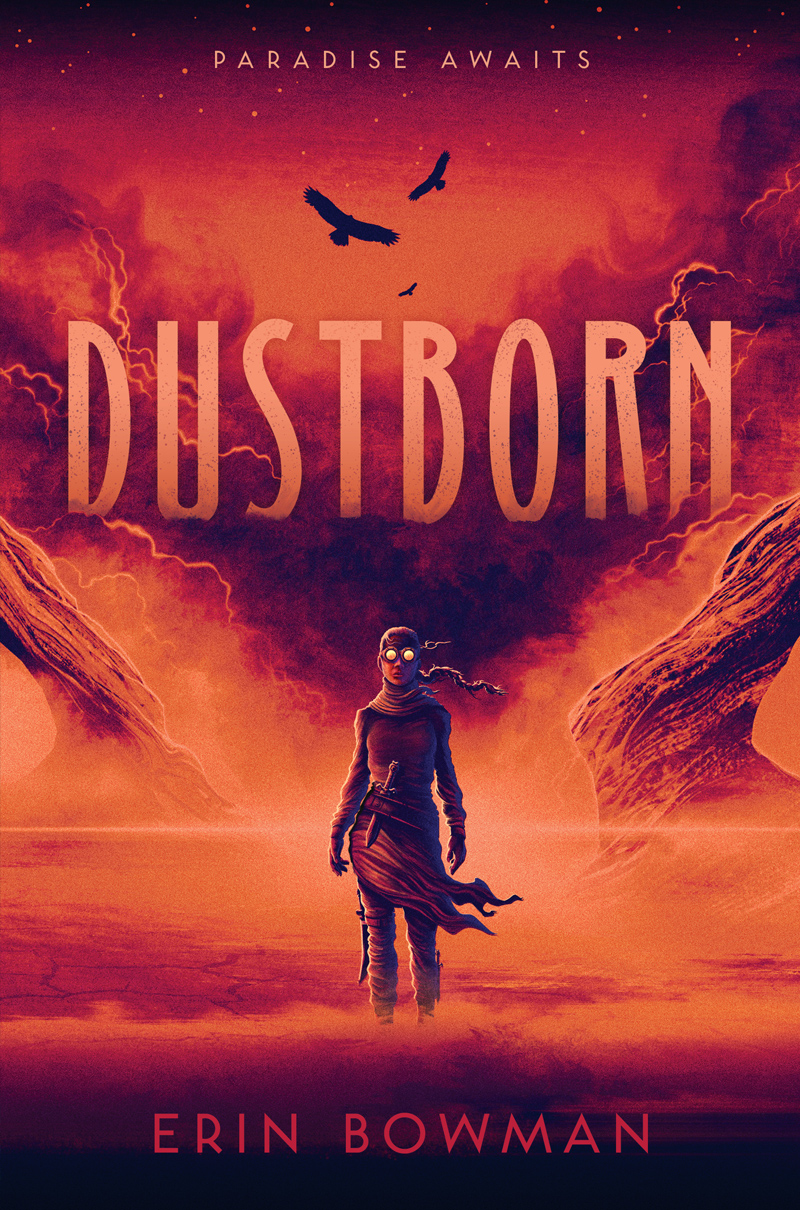 Erin Bowman takes readers across the post-apocalyptic Wastes in this tale of trust and family.

It’s become somewhat of a recurring theme for me to pick up a new Erin Bowman book with little knowledge of what it’s going to be about but a fairly good assumption that I’m going to have a good time. Things are no different with Dustborn.

Delta of Dead River has always been told to hide her back, where a map is branded on her skin to a rumoured paradise called the Verdant. In a wasteland plagued by dust squalls, geomagnetic storms, and solar flares, many would kill for it — even if no one can read it. So when raiders sent by a man known as the General attack her village, Delta suspects he is searching for her.

Delta sets out to rescue her family but quickly learns that in the Wastes no one can be trusted — perhaps not even her childhood friend, Asher, who has been missing for nearly a decade. If Delta can trust Asher, she just might decode the map and trade evidence of the Verdant to the General for her family. What Delta doesn’t count on is what waits at the Verdant: a long-forgotten secret that will shake the foundation of her entire world.

I think it’s pretty well known by now, nine books in, that Erin Bowman doesn’t like to hang around in one genre for too long. Her debut Taken trilogy was set against a dystopian backdrop, her incredible Vengeance Road and Retribution Rails set in the wild west, before taking a dip into sci-fi horror with her Contagion duology. And that’s just for her YA releases — 2020 saw Bowman’s first foray into middle grade fantasy with The Girl and the Witch’s Garden.

With Dustborn, we are introduced to the post-apocalyptic Wastes, and while it’s yet another genre departure, it feels for the first time like a return to something we’ve seen before from Erin Bowman, but by no means do I say that in a negative way.

The Wastes of Dustborn harken back to the western setting of Vengeance Road, while some of the overarching plots and themes feel like a return to some of the better aspects of Taken. There’s the familiar aspect of seeing Bowman take on new challenges in her writing and world building through new settings and circumstances for her characters to navigate, but with the added benefit of a what I’d almost describe as a nostalgic homecoming.

In terms of the story, in typical Bowman fashion, the stakes are set high and early on. Delta’s world shifts astronomically, and she doesn’t find much time to rest as she tries to navigate her new circumstances. Along with an enjoyable supporting cast, the story and its twists run smoothly, with enough hooks to keep me invested and reading on.

In the second half of the novel, things begin to ramp up, and they ramp up fast. The pace increases to an almost breakneck speed, with a lot of new information and a slight shift in direction added in as the characters and story race towards the end. At the time, I was wondering if the pace was ramping up too fast, but looking back across the story as a whole, I have to admire the way that Bowman kept the story progressing in the final act.

The pace throughout the book, generally, was a bit up and down, but I think that worked well for the story being told. The Wastes are dangerous and unpredictable; things can change on a dime, and even the reader can’t feel comfortable or like they know what to expect.

It’s the themes running through this book that make Dustborn special, though. Living in the Wastes is unforgiving, with trust difficult to come by, and even more difficult to give out. From the beginning, we know that Delta has been tasked with keeping a branding on her back hidden, only to show it to someone she trusts with her life.

The recurring questions raised about what this branding is, and its symbolic resonance with the overall themes of trust and found family are really at the core of what makes this book something special and to be looked out for. And along with that trust, and family, comes another idea that’s typical in an Erin Bowman book; no matter how bleak things might seem, there’s always a way to find hope. It’s not an entirely new concept, admittedly, but the way which Bowman writes it really makes it a stand out.

The concept of trust and family really ties everything in Dustborn together beautifully. From the main characters to the background characters, the plot to the lore — it all hinges on the brand on Delta’s back and what that truly means for the future of civilisation. This book is a must-read for that, alone.

Dustborn releases on April 20th, and shouldn’t be missed!

Plot: Engaging and thought-provoking throughout, though with a few minor pacing issues.

Characters: Delta is a strong main character, though some side and minor characters can be somewhat forgettable.

Writing: Strong and consistent with some beautiful passages.

Theme/Message: The highlight of the book, looking into found family and trust in bleak, often hopeless, circumstances.