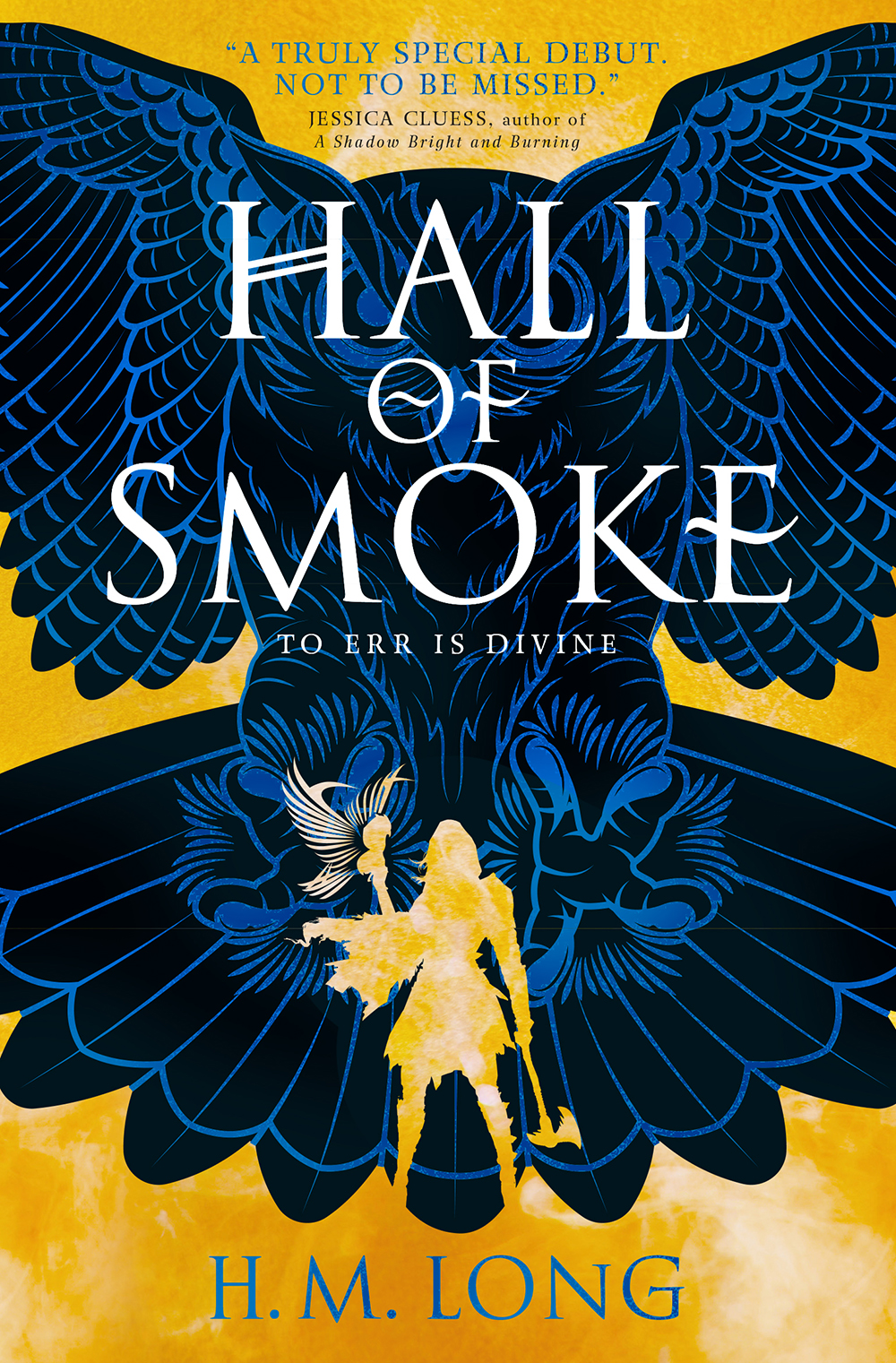 ‘Hall of Smoke’ by H. M. Long follows Hessa on her quest to right a wrong and save the world.

Hall of Smoke by H. M. Long follows Hessa, who sets out on a quest to right a wrong and save the world, only to find her beliefs and worldview upended.

Hessa is an Eangi: a warrior priestess of the Goddess of War, with the power to turn an enemy’s bones to dust with a scream. Banished for disobeying her goddess’s command to murder a traveller, she prays for forgiveness alone on a mountainside.

While she is gone, raiders raze her village and obliterate the Eangi priesthood. Grieving and alone, Hessa — the last Eangi — must find the traveller, atone for her weakness and secure her place with her loved ones in the High Halls. As clans from the north and legionaries from the south tear through her homeland, slaughtering everyone in their path, Hessa strives to win back her goddess’ favour.

Beset by zealot soldiers, deceitful gods, and newly-awakened demons at every turn, Hessa burns her path towards redemption and revenge. But her journey reveals a harrowing truth: the gods are dying and the High Halls of the afterlife are fading. Soon Hessa’s trust in her goddess weakens with every unheeded prayer.

Thrust into a battle between the gods of the Old World and the New, Hessa realizes there is far more on the line than securing a life beyond her own death. Bigger, older powers slumber beneath the surface of her world. And they’re about to wake up.

After finding her life in ruins and being captured by enemy raiders, Hessa is determined to fulfil her destiny and kill Omaskat. When her first attempt fails, she finds herself in the southern country of Souldern and begins the journey back to the North with the help of Euweth and her son Nisien.

H. M. Long builds an expansive world spanning several dimensions. Each country (Arpa, Algatt, Eangen and Souldern) worships a different pantheon of very tangible deities that regularly interact with their subjects. In this world it’s inconceivable that a person doesn’t have a god to look to, as that’s the only way for their soul to move on after death.

Personally, I love stories where deities are actual characters and Hall of Smoke didn’t disappoint. Eang is powerful but she’s also selfish and very human in her fears and betrayals, while other deities have their own strengths, flaws and motivations that impact Hessa’s quest.

Tradition dominates the human side of the world, shaped largely around the worship of each pantheon. Hessa’s people are semi-nomadic, like the Algatt and Souldern, whereas the Arpa span an empire with vast cities and an ordered army. Each country is wary of others, with Hessa regarding the Arpa and Algatt in particular as enemies.

It’s a world steeped in blood and violence. All the pantheons demand blood sacrifices (both human and animal) from their worshippers, while most countries are at war. The Algatt raid Eangen on a yearly basis; the Arpa seek to conquer the continent, while the Soulderni pay tithes to maintain peace with their neighbours. When the book begins, the Algatt have been pushed out of the mountains into Eangen by the Arpa who are slaughtering their way through the region.

Long tells Hessa’s story in first person POV which allows us to experience her grief and determination alongside her. As a character, Hessa is singularly focused on her mission for the first half of the book, with doubts creeping in as the story progresses. She holds her traditions dear but finds herself opening up to others as she travels with different groups. Hessa is a very strong character, with many layers to her that this book only begins to uncover. She’s also a very lonely character. Despite travelling with various groups, her interactions with other characters barely go past surface level.

However, it’s obvious that Long put as much love into her secondary characters as she did Hessa. Each has their own backstory and motivations, making them more than just a story prop, and I would’ve liked to experience more of them.

Her care in writing also extends to the story itself. While Hall of Smoke is a character-book, the action is well written and well placed to spur the plot along. The fight scenes are vivid and dynamic without being overwhelming. The descriptions are elaborate but not flowery while the world building happens in bursts or through conversations which keeps the info-dumping to a welcome minimum.

Hessa also spends most of the book travelling. Through her, we experience the geography of her continent, the topography of the land, and even the plants and animals that she encounters. Long describes a lot of these scenes in detail, which slows the pace down and contrasts with the action scenes. Coupled with Hessa’s inability to connect with most other characters, it made large parts of the book slow to get through despite the good writing.

Overall I enjoyed the book. Hall of Smoke by H. M. Long is a tale of grief and redemption that invites its readers to question what they know of this world at every turn. It’s a good book, and a valiant debut from an author I will be looking out for.

Editors’s note: Per the author this book is aimed at an older audience as there is excessive violence and gore, and I’d add a content warning for self harm due to the blood magic.

A dynamic tale of grief