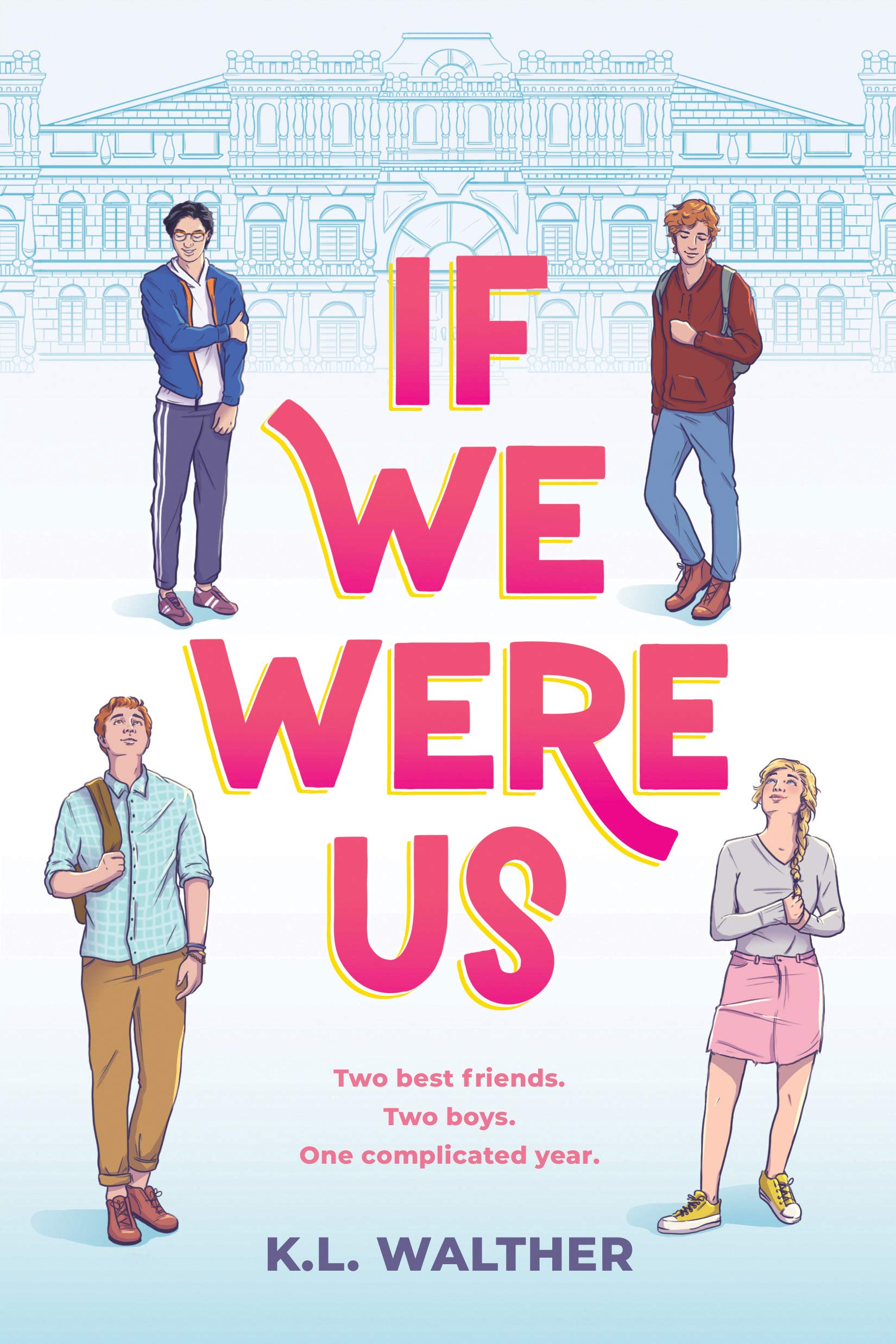 'If We Were Us' by K.L. Walther (Sourcebooks Fire)

REVIEW: ‘If We Were Us’ by K. L. Walther is an adorable double romance

‘If We Were Us’ successfully takes on two romances at the same time without shifting the spotlight from its gay representation.

While If We Were Us mainly centers around two angsty teenage romances (one of which is an unwavering example of gay representation), it still doesn’t shy away from touching on timely issues.

Everyone at the prestigious Bexley School believes that Sage Morgan and Charlie Carmichael are meant to be….that it’s just a matter of time until they realize that they are actually in love.

When Luke Morrissey shows up on the Bexley campus his presence immediately shakes things up. Charlie and Luke are drawn to each other the moment they meet, giving Sage the opportunity to steal away to spend time with Charlie’s twin brother, Nick.

But Charlie is afraid of what others will think if he accepts that he has much more than a friendship with Luke. And Sage fears that things with Nick are getting too serious too quickly. The duo will need to rely on each other and their lifelong friendship to figure things out with the boys they love.

In a time of worldwide chaos, sometime’s it’s nice to forget your own problems and instead worry about someone else’s — preferably fictional of course, else you risk making it worse. If We Were Us is easily one of those reads for troubled times, and came at a great month considering its gay representation.

Romance can be tough, and the characters of Sage and Charlie aren’t immune to the many complications (and joys!) those butterflies might bring. With a story told from each of their perspectives, I was delighted to find myself whisked away into not one blossoming relationship, but two. Even better was the fact that each was just as interesting as the other, as both protagonists come to find their love lives intertwined; what changes in one sends ripples throughout the other.

A main source of this complication is sparked by Charlie’s struggle with his sexuality upon meeting Luke, a new student. As a gay reader, I found his internal conflicts to be surprisingly realistic and relatable. Character-wise, Charlie had all the makings of a three-dimensional figure — Walther succeeded in creating a character that jumped off of the page with life.

In comparison, Charlie’s counterpoint, Sage, had just as compelling of a conflict to sort through; her own love-interest happens to be Charlie’s brother…who, like most of her peers, is convinced the relationship between her and Sage goes beyond mere friendship. Her struggle between possibly betraying her best friend, or giving up the boy she loves is one that’s both timely and compelling.

Overall, Charlie and Sage are characters I easily fell for. I felt for their struggles, recognized their plights, and tried not to get too emotional when things went their (our) way. That being said, I found most of the supporting cast — aside from Luke — to be lacking in some uniqueness. While they were still realistic interpretations of teenagers, I felt that they were interchangable with any other side characters from most recent contemporary novels. I certainly enjoyed Clarke and Sage enough to let them pull me through the story, but I would’ve liked to see a little more spark from those surrounding them, other than their love interests.

The romance itself took main stage throughout the story, and I quickly found myself falling for the love-interests of our two protagonists almost as hard as they did themselves. Fans of romance will be hard-pressed to find any disappointment here, as If We Were Us doesn’t skip out on any of the fluttery, gushy goodness the genre is known for.

Most of my immersion into the story can be credited to Walther’s writing, which wonderfully captures the essence of a teenage voice. Even though a majority of the book is free from poetic, flowery prose — which even a bad book can have — it actually worked in its favour. It made both characters all the more realistic (most teenagers don’t think in Shakespearean dialogue, after all), and kept the pacing as steady as it was gripping.

As readers can decipher from the book’s blurb, one of the main — if not the largest — themes If We Were Us is centered around is a teenager’s struggle to come to terms with their sexuality. In this case, Walther ensures to make such a journey as light as possible.

While the plot still touches on a few darker and timely themes, such as shame and the toll the coming-out process can have on one’s mental state, readers don’t have to worry about any seriously triggering scenes that might come with a grittier look at teenage sexuality. It seems Walther’s main focus is telling a story of two love-struck teens battling the ups-and-downs of romance together — and I was happy to find she succeeded in doing just that.

For readers who are searching for something mind-blowing or high-concept, If We Were Us probably won’t meet their needs. But that’s not to say it isn’t a wonderful read in it’s own right — because it truly is. There’s always room for a book that’s smooth and easy, with just the right amount of conflict to keep it interesting. As with any romance, there’s certainly parts where its story becomes turbulent with drama, but there’s more than enough fluffy, feel-good moments to fall back into after the storm.

Especially in a time like the present, I found If We Were Us to be not so much a breath of fresh air, but a breather. And sometimes, that’s all you need.

Plot: Although propelled by character conflict, it remains light while still touching on important themes.

Characters: Both protagonists are as compelling as they are realistic. Gay representation is relatable and touching.

Writing: The prose avoids overcomplicating itself with too much poetic language, which makes the characters’ teenage voices all the more authentic and the pages easier to fly through.

Theme/Message: Respectfully touches on timely topics like sexuality and coming out in a teenage setting.