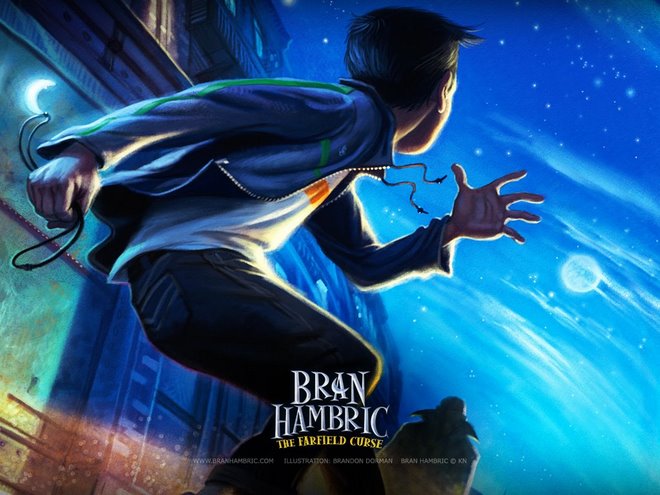 We’re beginning to see more and more young authors in the publishing business, whether in the self-publishing or mainstream publishing industries. Who comes to mind when you think of a young author? Christopher Paolini? Nancy Yi Fan? Cayla Kluver has been making headlines herself lately.

Kaleb Nation should be making headlines himself soon, as he spent nearly all of his teenage years writing his debut novel. His book, Bran Hambric: The Farfield Curse (published by Sourcebooks Jabberwocky), hits shelves September 9th, 2009 (yes, that’s 9/9/09). I first learned about Kaleb’s book almost a year ago. Being a a male Twilight reader, I couldn’t help but stumble across his website, TwilightGuy.com. After visiting the website several times, I learned that Kaleb had written a book – what’s more was that he had been picked up by an actual publisher. This was, of course, a pleasant surprise. I was immediately interested in the book. It took a while before details on the story became available, however when they did come, I couldn’t have been more than excited.

At six-years-old, Bran Hambric is found inside of a locked bank vault with no recollection of his past. The only clue to his identity is a scrap of paper with his name. Bran is reluctantly taken care of by the Wilomases who treat him more like a servant than a son. However, Bran’s life begins to take a major turn when he is attacked by a mysterious creature on the roof. His past unravels itself and Bran learns of a mysterious power within himself. He’s a mage. It’d be pretty cool, being able to do magic, right? Unfortunately, that’s not quite the case for Bran. He lives in Dunce, a city with a nasty dislike toward magic of any kind. They despise mages – and OH do they loathe gnomes. It also doesn’t help that a mysterious figure seems to be searching for Bran throughout the city. As Bran begins to learn of his new powers, he also sets off on an adventure that will lead him to his past and future.

Kaleb Nation’s story will certainly appeal to fantasy fans who are eager for a twist: magic being a crime. The story is filled with mystery, excitement, fun and humor that readers will remember for years to come. I found myself reading the book in the car and in classes, laughing out loud in some cases, which got me some very concerned and confused faces. My favorite character was certainly Sewey Wilomas, who in my opinion, was the most humorous in Kaleb’s cast.

I’m excited to see what Kaleb Nation has in store for Bran Hambric – I only expect good things (and gnomes)!

Don’t forget to come back in a few days for an interview with the author, Kaleb Nation!

A special thanks to Paul Samuelson at Sourcebooks for allowing me to review the book and be apart of Kaleb’s blog tour.  Be sure to check out the rest of the sites involved too: