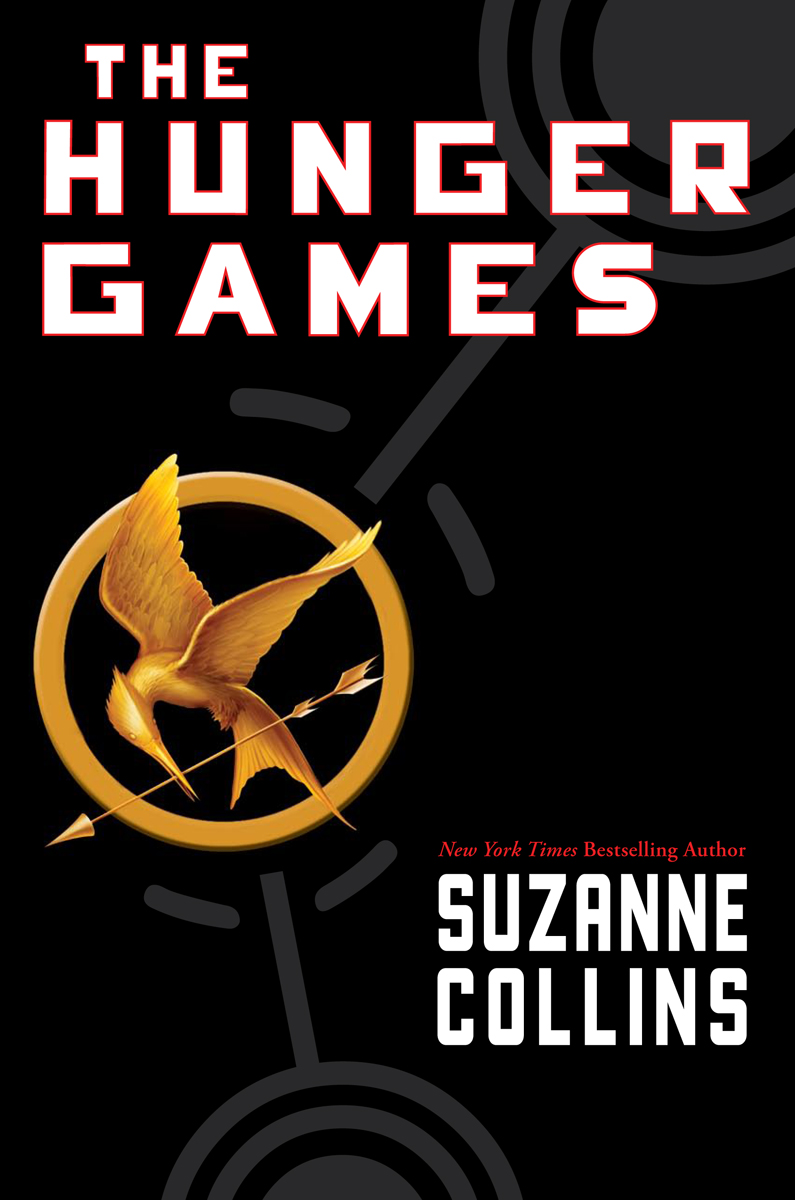 The Hunger Games by Susanne Collins was released last September, and I actually read it last December, but I had a mini sneak preview of it last summer.  So, why am I blogging about it now – almost a year later?  Simply because I never got to it before.  It’s summer now, and with the […]

The Hunger Games by Susanne Collins was released last September, and I actually read it last December, but I had a mini sneak preview of it last summer.  So, why am I blogging about it now – almost a year later?  Simply because I never got to it before.  It’s summer now, and with the fresh new design, I hope to be working more on this blog and that includes some reviews and thoughts on books I have read or am reading.

The Hunger Games by Suzanne Collins

So, let’s go back to last summer.  I was meeting with Mrs. Calahan, my old school librarian who had just finished going over Space Dog and the Solar Stone Code with me.  We had some extra time so she brought out a black, paperback book.  I quickly found out that it was an ARC of The Hunger Games.  She gave me a quick rundown on the premise of the book:  The story takes place in a post-apocalyptic future.  America has been divided into twelve districts that surround a rich Capitol.  The districts are notably poorer than the Capitol, particularly District 12 which is home to Katniss Everdeen.  As a punishment for a past rebellion, the Capitol keeps a firm grasp on the districts by forcing each to submit one boy and one girl – “tributes” – for the annual Hunger Games.  What do the Hunger Games consist of?  It’s a fight to the death between the tributes.  Last one standing is the winner and they get fame, fortune and food for themselves and their district.  It’s not bad when all you have is a slimy old hut to live in and a few crumbs of bread to nibble on every day.  How do they select the two *lucky* children?  A lottery.  Not one that you’re going to want to win, obviously.  The trouble starts when Katniss’s younger sister, Primrose, is selected to fight in the games.  Being the noble and courageous young woman she is, Katniss takes her place alongside the other tribute, Peeta Mellark, a local bread boy.  And of course, they’re forced to compete in the Hunger Games, killing each other off.  Oh yes, and everything is televised and broadcast to this destroyed America (which is actually called Panem).  People there watch it like people here watch American Idol or Britain’s Got Talent.  It’s a televised obsession.  And in case you can’t do the math, that’s 24 tributes.  That’s 23 deaths all in one book.

So, I had a chance to check the ARC out.  I remember her commenting that she absolutely loved it and that she couldn’t wait for the next book, even though the first hadn’t been released.  I kept the book in mind as the months passed and remembered it when Christmas was approaching.  I put it on my list.  Did I get it?  No.  But, I had some money to spare so I picked myself up a copy the day after Christmas.  When I approached the cashier with the book, she gave me a cautious look.  “That book is extremely gruesome,” she said.  I asked her if she liked it though and she said yes but mentioned that it was similar to “Battle Royale.”  Not knowing what that was, I looked it up and found that it’s a Japanese film where people are put onto an island and forced to kill each other.  Same premise, sort of.  Either way, I was eager to dig in.

And I LOVED IT!

Now, of course, Harry Potter will always be my all time favorite, but next to it stands The Hunger Games.  It knocks Twilight and Inheritance out of their old spots on my bookshelf.  I spent a few days reading it, I didn’t want it to end, and by the time I was finished, I understood what Mrs. Calahan had said when she said that she couldn’t wait for the next book.

So, why so great? SPOILERS AHEAD.

Firstly, the whole post-apocalyptic world seems very appealing to people these days.  We see it in books, TV and movies.  The Hunger Games has that element as well, but one thing I think is interesting to note is that it is never once explained in the book how that world came to be.  The only knowledge that we have of the past is that at one point, there had been 13 districts rather than 12; but during a revolt, the 13th district was destroyed and that is the reasoning behind the Hunger Games.  Punish the districts.  Another interesting aspect in Collins’s world is that every district specializes in some sort of area of work for the Capitol.  For instance, Katniss’s district, District 12, specializes in mining while others in things such as agriculture.

I think things really become to get tense immediately following the picking of Katniss and Peeta as District 12’s tributes.  Collins does a superb job of getting in every single character’s head.  I don’t have my copy with me at this very moment (I lent it to a friend), but if memory serves me right, Katniss and Peeta are brought in to see their family one last time.  Peeta’s father actually gives Katniss bread (as they own the local bakery).  This was brilliant.  Why does Peeta’s father – the father of the boy she is supposed to kill – give her food?  Katniss recognizes it rather quickly.  Because he’s offered her bread, she might actually hesitate to kill Peeta when the time came – and hesitance is NOT something to have once entering the arena.  This is why I say Collins gets into the heads and minds of her characters.  Seeing as the father plays little to no role in the plot, his thoughts and actions really aren’t that important.  But by including this move on his part, Collins actually characterizes and solidifies this insignificant character.

But in my opinion, things get heated right before the games begin.  The tributes have their own makeup artists and mentors and become overnight celebreities.  I could go into detail of Katniss’s hairdresser, who actually plays a vital role in the story, but what I want to highlight are the interviews.  Before the Hunger Games begin, each contestant is interviewed on live television.  And it’s what occurs in Peeta’s interview that I think is the brilliance of the story.  Peeta confesses on live television that he is actually in love with Katniss.  Yeah, yeah, all the romantics go aww right now.  But now this gives Katniss a rather large problem.  Is this actually true love, as he says it is, or is it a technique to win the audience over?  And after all, the audience is actually quite important in the games, as sponsors may send you handy items in hopes that you win.

Of course, for those of us who have read it, we know that he actually does love her.

And one final aspect of the story that I thought was brilliant as well: It’s told in present first-person.  I started reading and I was like “WTQ?!?”  I can honestly say that I had never read a story in that PoV.  But this was an absolutely brilliant move on Collins’s part.  I have no idea if she did this intentionally (probably).  I’ll tell you why: throughout the read you never know if Katniss will be the next tribute to die.  Imagine, if the story had been told in first-person past (like Twilight), we would already know the answer.  “Oh, Katniss is recalling the story to the reader – she must be alive.”  But since it’s in a present tense, we are actually living it with her.  Not reliving it – living it (you know, like in that movie, Cloverfield).  What’s more is that when there’s a book series, it usually says somewhere on the spine, cover, or title page that it’s book “one,” “two,” or “three.”  Again, not the case with Hunger Games.  You actually don’t find out until the very last page that there is a second book.  Again, I think it really goes back to the whole not-knowing-if-Katniss-dies thing.  If we knew from the beginning that there was a second book, we would say, “well, she doesn’t die in this book, so I know she’s going to make it out in the end.”  Of course, for me, I knew, but I realize that many others didn’t.  (By the way, the book is actually the first in a trilogy).

I thought that this book was gruesome, brutal and plain out brilliant!  It’s got all the makings of a good story: action, mystery, suspense, romance (just the right amount), and twists and turns.  I love this book and I’m eagerly awaiting the second.

Book two of the Hunger Games Trilogy is called Catching Fire and is due for a September 1st release date.  Just days ago, ARCs were distributed at Book Expo America of Catching Fire.  I wish I could have gotten my hands on one, but I guess I’ll just have to keep waiting until September.  Just as exciting, it was confirmed just months after publication that the Hunger Games will be made into a feature-length film by Lionsgate Entertainment.  I imagine that it will be a worthwhile film as Suzanne Collins is adapting it herself.