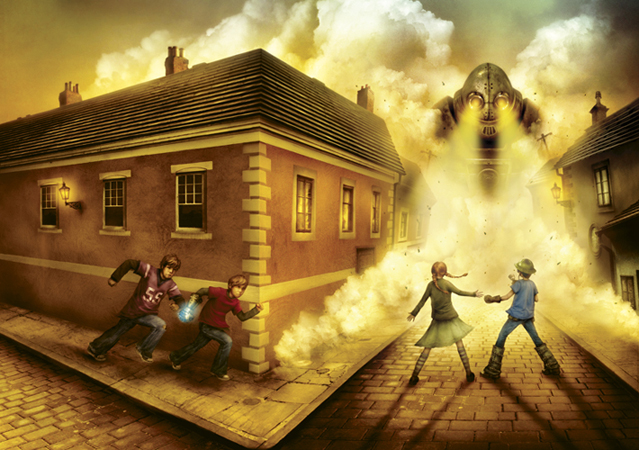 This review is LONG overdue. A few years ago I had the opportunity to meet Derek Benz and Jon Lewis (sometimes known as J.S. Lewis) at a book signing they did at my old Jr. High School.  It was 2006 and they were promoting their newly released book, The Revenge of the Shadow King, the […]

This review is LONG overdue.

A few years ago I had the opportunity to meet Derek Benz and Jon Lewis (sometimes known as J.S. Lewis) at a book signing they did at my old Jr. High School.  It was 2006 and they were promoting their newly released book, The Revenge of the Shadow King, the first book in the Grey Griffins series.  Following The Revenge of the Shadow King, the second book, The Rise of the Black Wolf and the third book, The Fall of the Templar, were released.

The Grey Griffins follows Max Sumner and his friends Harley Einstein, Natalia Romanov and Ernie Tweeny (collectively called the Grey Griffins, hence the name of the series.)  Without giving away too much of the plot from the first three books, the group of kids find themselves in a world that they had once thought fictional.  The monsters from their seemingly innocent card game turn out to be real and Max and his friends find themselves at the center of a plot full of Templar Knights, goblins, faeries and more.

The Revenge of the Shadow King, The Rise of the Black Wolf and The Fall of the Templar compose the “original” Grey Griffins Trilogy.  What do I mean by original?  The authors have started writing a new series of books that continues the Grey Griffins storyline.  This past June, The Brimstone Key, the first book in the Grey Griffins: Clockwork Chronicles, was released.

In The Brimstone Key, we find Max and the gang entering a new Templar-run school, Iron Bridge Academy.  Here, the students are trained to combat monsters–something that can be appreciated by the Grey Griffins!  But dark secrets are brewing at Iron Bridge.  Some of the students begin to disappear and Max becomes plagued with nightmares about the mysterious Clockwork King.  The Grey Griffins are at the center of it all, having to solve the mystery behind who the Clockwork King is, why the students are disappearing, and of course, balancing all of this out with school. (Sounds like my Senior year in High School. ;))

The Brimstone Key by Derek Benz and J.S. Lewis

The Brimstone Key is a fantastic addition to the Grey Griffins series.  Of the four, it is without doubt my favorite.  The deal with this new series is that it truly expands on the world that was only barely introduced in the original trilogy.  Iron Bridge Academy introduces a huge cast of characters and we see for the first time that there are other kids like the Grey Griffins.  The Clockwork Chronicles truly adds a fresh breath to the story as steampunk becomes a focal element.  The steampunk details are what tweak the world and truly make it pop.  The students dress in a steampunk fashion and the world is filled with all sorts of clockwork gizmos.  The academy itself is placed among a city called New Victoria, hailing back to the roots of the steampunk movement. (For those of you who don’t know, steampunk is a science-fiction genre that reflects the earlier days of the Industrial Revolution–steam powered technology–and the social norms and aspects of the Victorian Era).

With The Brimstone Key being the start of a new series, readers new to the Grey Griffins might understandably be a bit confused when reading.  Starting the series with The Brimstone Key is like reading Goblet of Fire before Philosopher’s Stone, Chamber of Secrets and Prisoner of Azkaban.  However, the authors have taken this into account.  A sufficient amount of background info is provided so new readers won’t be lost.  I was actually very impressed with how they did this.  In the situation that they were in, there was certainly plenty of room for severe info dumping.  Fortunately, I feel that the authors did a great job in implementing this background information.  In the moments where this information pops up, it doesn’t ruin the flow of the story.  It was mostly short, simple and relevant.  That being said, I would still encourage people to start with The Revenge of the Shadow King.  You’ll certainly have a better understanding of the world, story and characters.  But if you want to start with The Brimstone Key, you can always go back and read the others later.

Now don’t think for a second that the Grey Griffins is only for children.  Older readers will appreciate the references and allusions to well known legends.  A huge chunk of the books’ cast hails from the Arthurian legends (Morgan Le Fay can’t go missed!)  The authors also make subtle references to historical figures (anyone else notice Harley Einstein and Natalia Romanov?)  I always love it when authors make references to history, literature and the like. 🙂

(I also think it’s interesting to note that Max is the guardian of the Codex Spiritus, a book that can both imprison and–from what I understand–release magical creatures.  Release, or “summon” creatures out of the book.  Summon=summoner.  Summoner=Sumner.  Sumner=Max Sumner.  Just saying.  I might be crazy. ;))

All in all, The Grey Griffins is a fantastic series that both kids and adults will enjoy.  The next book, The Relic Hunters, is due June 2011!  Read them.  The Clockwork King commands you to!

The Revenge of the Shadow King, The Rise of the Black Wolf and The Fall of the Templar were published by Orchard Books, an imprint of Scholastic Inc.  The Brimstone Key was published by Little, Brown.