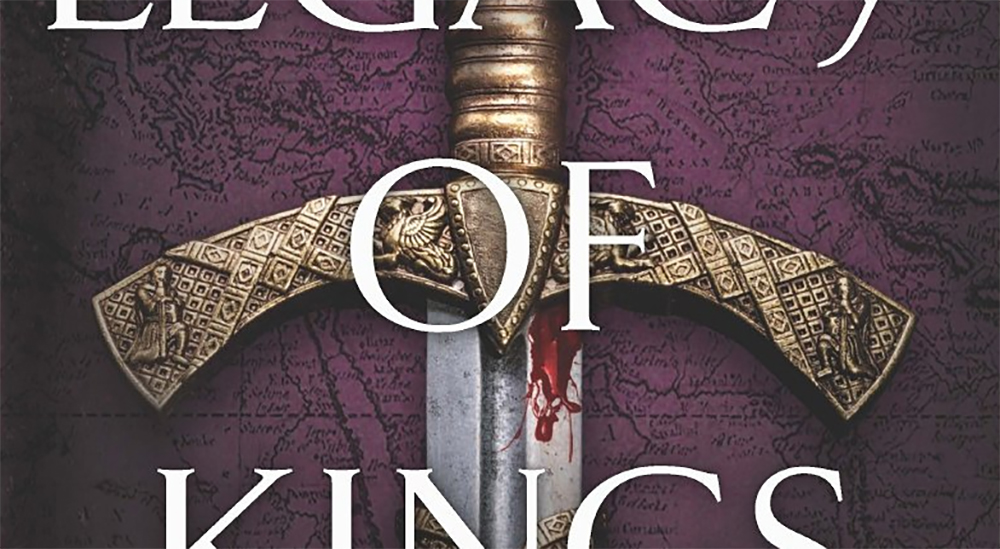 Expect a whole lot of magic.

In Eleanor Herman’s YA debut, Legacy of Kings, you will find an intriguing story full of history, love, murder, and a whole lot of magic.

Imagine a time when the gods turn a blind eye to the agony of men, when the last of the hellions roam the plains and evil stirs beyond the edges of the map. A time when cities burn, and in their ashes, empires rise.

Alexander, Macedonia’s sixteen-year-old heir, is on the brink of discovering his fated role in conquering the known world but finds himself drawn to newcomer Katerina, who must navigate the dark secrets of court life while hiding her own mission: kill the Queen. But Kat’s first love, Jacob, will go to unthinkable lengths to win her, even if it means competing for her heart with Hephaestion, a murderer sheltered by the prince. And far across the sea, Zofia, a Persian princess and Alexander’s unmet fiancée, wants to alter her destiny by seeking the famed and deadly Spirit Eaters.

Weaving fantasy with the salacious and fascinating details of real history, New York Times bestselling author Eleanor Herman reimagines the greatest emperor the world has ever known: Alexander the Great, in the first book of the Blood of Gods and Royals series.

The cover of Legacy of Kings alone drew me into this book, then I read the synopsis and needed it as soon as possible! Retellings of history mixed with fantasy are the perfect ingredients for a great book. So, I was really excited to dive into this world and fall in love.

It started off slow and I found the story hard to get into. I enjoyed all the history though, including the Greek mythology, all of it was well executed by the way Eleanor explains it in a way to never confuse you.

As I was reading I instantly felt like I was watching an episode of Reign mixed with Game of Thrones. There are a lot of different POVs throughout Legacy of Kings, seven different ones to be exact. I really love that Eleanor thought it would be interesting to have so many different POVs, because I always do find myself wondering what the other characters are thinking. So, I liked the idea but having so many made the plot a little hard to understand at times. I didn’t know why I was rooting for a certain character, and all I wanted was to feel connected to them so I could want certain things to happen throughout the story.

The seven different POVs in Legacy of Kings are:

Like I said, I didn’t connect with the characters as much as I would have hoped that I would have. I felt as if I was finally getting to know them and then the chapter would end, switch to a new POV, then we wouldn’t come back to that character until 3 or more chapters down the road.

With that being said, as the story progressed there were some developments made in each character. Eleanor did a great job at sharing more about them as they continued to grow individually. My favorite characters were Kat and Hephaestion. Both of them were the perfect mix of strong leaders and mysterious ones, which left me wanting to know more about them. Their chapters really drew me into the story. I hope to see more character development in the future books. The world building was so strong in Legacy of Kings that I have a good feeling that we will see more of the characters shining in the next book.

Legacy of Kings is definitely a lot different from books I usually read, based on the writing alone, but it was very enjoyable. Eleanor does write in such great detail where I felt as if I was just reading words, and forgetting what I read afterwards. There were times where I felt certain plot points were unnecessary, especially reading Zo’s POV, and I didn’t understand why it was even in the book. By the end of the book I finally understood why I had to read those parts though, and how they were needed to fully grasp the whole story. Each of the character’s plots come together to end the first book great and do leave you wanting more.

Overall, I think Eleanor wrote a great historical fiction book. The fantasy in Legacy of Kings is well worth the read, it has the perfect balance of magic and history. I have seen a lot of people complaining that Legacy of Kings doesn’t do justice to the history of Alexander the Great, but I have to tell you to have an open mind when picking up this book. If history is the reason why this story draws you in, then remember that it’s fiction for a reason.

You can see through Eleanor’s writing how hard she worked to build a realistic world based on history. There are more books for her to unravel more of Alexander the Great’s history that we all know and love, and I look forward to reading all of it!

The plot shines but too many points of view bog the story down.