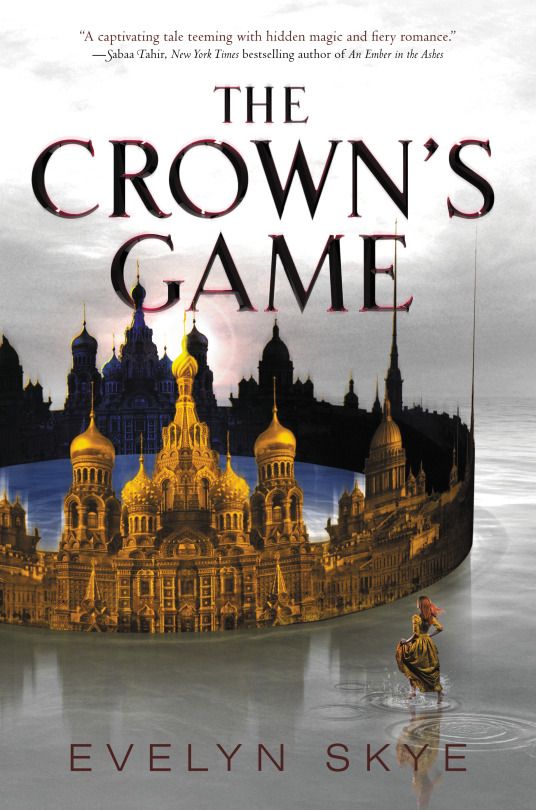 Evelyn Skye’s debut novel, The Crown’s Game, did not live up to expectations.

After hearing good things about this book, I found myself disappointed overall.

Vika Andreyeva can summon the snow and turn ash into gold.

Nikolai Karimov can see through walls and conjure bridges out of thin air.

They are enchanters – the only two in Russia – and with the Ottoman Empire and the Kazakhs threatening, the tsar needs a powerful enchanter by his side.
And so he initiates the Crown’s Game, a duel of magical skill. The victor becomes the Imperial Enchanter and the tsar’s most respected adviser. The defeated is sentenced to death.

Raised on tiny Ovchinin Island her whole life, Vika is eager for the chance to show off her talent in the grand capital of Saint Petersburg. But can she kill another enchanted – even when his magic calls to her like nothing else ever has?
For Nikolai, an orphan, the Crown’s Game is the chance of a lifetime. But his deadly opponent is a force to be reckoned with – beautiful, whip-smart, imaginative – and he can’t stop thinking about her.
And when Pasha, Nikolai’s best friend and heir to the throne, also starts to fall for the mysterious enchantress, Nikolai must defeat the girl they both love…or be killed himself.

As long-buried secrets emerge, threatening the future of the empire, it becomes dangerously clear – the Crown’s Game is not one to lose.

After that lengthy blurb, I don’t really need to tell you much else about The Crown’s Game – it’s pretty much summed up, and you can draw your own conclusions as to what is going to happen (perhaps quite accurately without even reading the book). BUT, we all know blurbs aren’t exactly my best friend; so I read the novel without reading it.

The main issue I have with this book is that I feel it has been marketed wrongly. I do not think it is a Young Adult novel, but rather belongs in the Teen Fiction section of the bookshop. I would say the age range for this novel is 13-16 years, and almost too obviously so. I don’t think older readers of Young Adult fiction would find this book particularly stimulating as I believe much of the novel is guessable. And far, far too cliched. A love triangle, a brooding young boy, and a “not normal”, fiery, special girl…PLUS a beautiful heir to the throne? Honestly, I’ve read it too many times before.

I also found it resembled stories I have read before. I know this is likely within similar genres, but some instances were too familiar to ignore. The whole premise of a game involving magic, where the loser dies, is exactly the same premise of The Night Circus. And the Jack-in-the-box and ballerina scene is almost an exact replica of the same scene in Chitty Chitty Bang Bang. Needless to say, I was disappointed with the unoriginality of the story.

I found some of the characters unnecessary. Yuliana and Aizhana were simply devices to make other things happen and personally, I don’t believe they were vital to the story. I think the consequences of their actions could have easily been caused by something or someone else.

Having said all this, there are some good points. Looking at it from the idea that it is a teen fiction novel, it fits perfectly into that genre; I think a lot of young readers will enjoy it. It has magic, royalty, balls, and romance. But for a young adult novel, I’m afraid it just needs a little more substance.

The writing is perfect for a younger audience. It is not too complicated and the descriptions are good. Sometimes it is a little cliched, but I think for this audience it works very well. It is interesting if you have not come across similar novels before – and I did enjoy that it was set in the past, and in Russia (as most books are set in America, or the UK). I thought Evelyn Skye weaved the fantasy into only slightly embellished history very well. It was refreshing to explore a different country through a novel.

The Crown’s Game is the first in a series of novels. I personally won’t be reading the rest, not just for the reasons stated above, but also because I do not think the ending adequately set up the story for another book.

Overall I thought the novel was a little thin on the ground, with lots of different character points of view that disrupted the flow of the story.