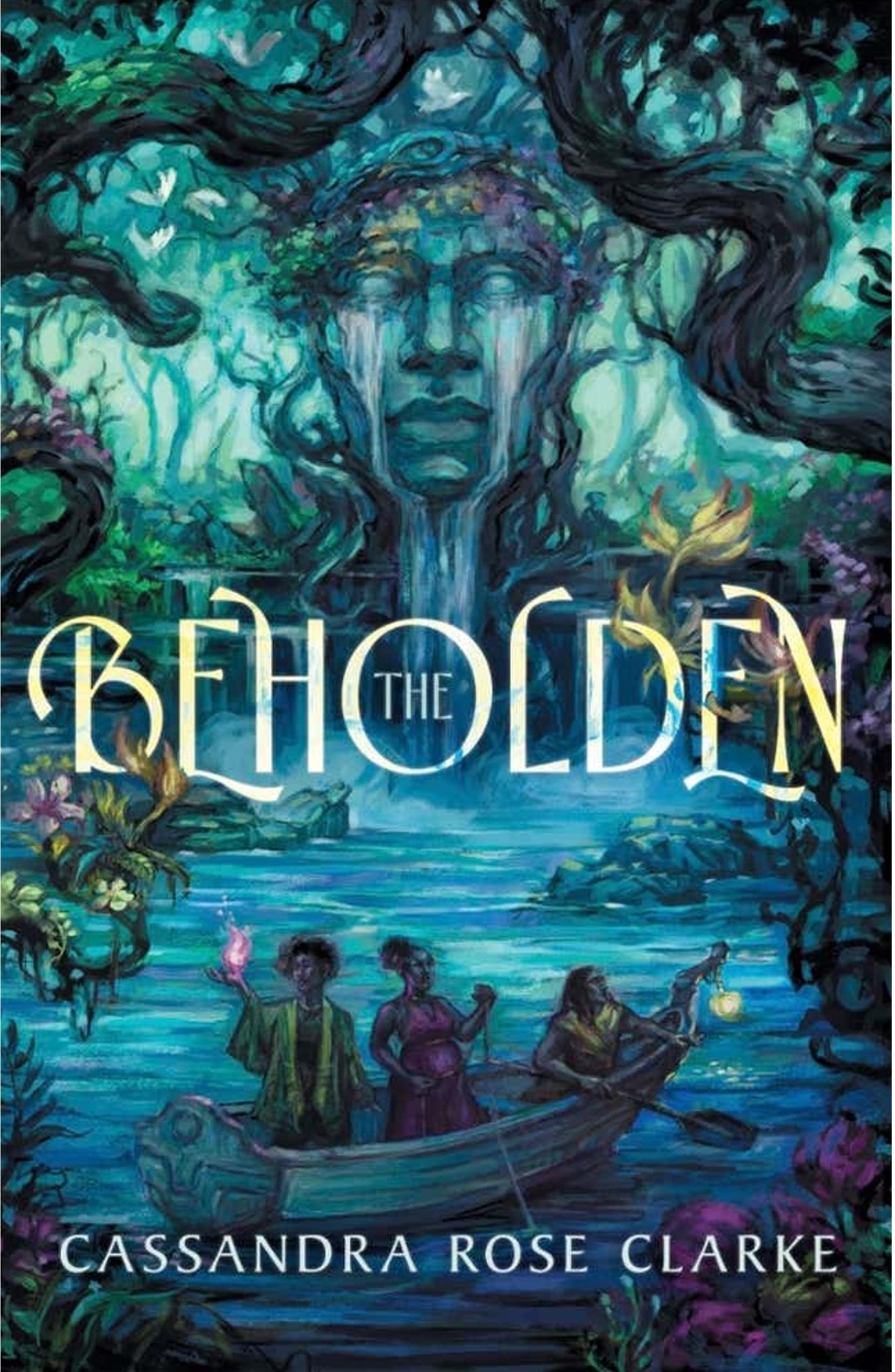 REVIEW: ‘The Beholden’ by Cassandra Rose Clarke tells a tale of love and loss

One pirate, one magician in training, and one aristocrat set out to bring death back in this thrilling tale.

The Beholden by Cassandra Rose Clarke ponders on the aspects of a world without death and how far one expecting mother would go to stop that.

Orphaned as young women, Celestia and Izara De Malena find themselves land rich but destitute, with only a failing rainforest acreage, Celestia’s perfect manners, and Izara’s nascent magic to their aristocratic names. With the last of their money running out, they enact a dangerous plan — using a spell she doesn’t fully understand, Izara summons the Lady of the Seraphine and demands a favor: a husband for Celestia, one rich enough to enable the De Malena sisters to keep their land. But a favor from the river goddess always comes at a cost . . . Now, five years later, rumors of war and disease are spreading, Celestia’s husband has been called away on a secret mission for the Emperor, and the Lady of the Seraphine is back to collect her due. Izara will be forced to leave the academy where she has been studying to become a mage; Celestia will be pulled from her now-flourishing farm while newly pregnant with her first child. Together, they must repay their debt to the Lady — embarking on a mission that will put them on a collision course with Celestia’s husband, the Emperor, and a god even more powerful than the Lady of the Seraphine.

When Celestia and Izara set out to gain their favour, they don’t realise their guide, Ico, will also be dragged along for the ride five years later. As always, Cassandra Rose Clarke’s strongest asset is how she writes her characters. Celestia, Izara and Ico each have a very distinct voice and personality that are consistent throughout the book.

When Ico is called, he had been doing his best to leave his pirating days behind. Having stumbled into a relationship with the Lady of the Cold, he deeply regrets agreeing to this favour when he is whisked away to the Seraphine, a river he swore never to step foot in because his debt collectors would come for his head. As such, his bitterness and fear are palpable for the first chunk of the book. He spends much of the first few chapters drinking, and staying on the side lines, letting the two women take the lead and even running away from confrontations. It was very satisfying to see him not only grow past that and help in the quest, but also form a bond with the sisters. Where he was afraid of Izara’s magic and dismissed Celestia’s strict adherence to the rules of hospitality, he comes to see both as an asset during his character arc.

Izara’s character was the more consistent of the three. Through Celestia’s wish, she was able to go to the prestigious Academy to study magic, but she loses the privilege when the Lady calls her. This regret weighs heavily on her throughout and she spends her time thinking of how she could study the new magical systems she uncovers during her quest. As the practical one, she is the brains of the team, often coming up with their next lead. She is also a rock for Celestia as she increasingly tries to protect her sister and unborn child.

But it was Celestia who surprised me the most. Her biggest defining trait is how well she behaves in polite society. She knows all the aristocrats and all the rules, and most importantly she sticks to them. Rather than being played off for laughs, this is central to completing the quest as the gang runs into several situations where her expertise is the key. She does learn to be more relaxed about certain things as the book progresses too. Due to her pregnancy, she’s quite anxious, especially in the beginning, but learns to take things as they come by the time the finale rolls around. A lot of this has to do with those around her caring for her, particularly the bonds she made along the way.

Clarke’s world is equally fascinating. In a world where gods watch over natural elements, the main players are the goddess of the Seraphine, a river that is the central pillar of The Empire, and the twins Growth and Decay. Each has an important role with the absence of one threatening to plunge the world into chaos. The Beholden asks what would happen if death vanished, and the answer is monstrous. Beyond the physical aspect, Clarke raises some interesting moral questions about our own relationship with death and decay throughout the book. I was absolutely captivated by her worldbuilding and would happily read more books based in such a world.

Clarke truly brings the world to life in The Beholden. Be it the fantastical aspects, the more mundane tasks of running a manor, or squabbles and decorum in a palace, there was hardly an instant where I couldn’t instantly picture what was going on. It’s really the writing that allows the characters to be so lovable without obscuring the interesting moral questions brought up, nor the world the author builds.

Where her characters shine, her plot is left in the shadow. The premise itself is fascinating but the execution came off as rushed at times. Some of the places the gang visited on their way to find the missing god were barely touched upon, which made those parts of the book go by too fast. Otherwise, the plot was very engaging. It’s what grabbed my attention for the first few chapters, whereas the characters took a while to grow on me. The pacing has some hiccups related to these rushed parts, but it was good overall. Clarke’s writing has a whimsical quality to it that almost made me overlook these few flaws while I was reading; it was only upon reflection that they stuck with me.

Overall, I very much enjoyed The Beholden by Cassandra Rose Clarke. The main quest grabbed my attention, but it was ultimately the characters and the writing that made this book stand out for me. Her world without death was horrifyingly vivid while the reasons behind it were ultimately very human.