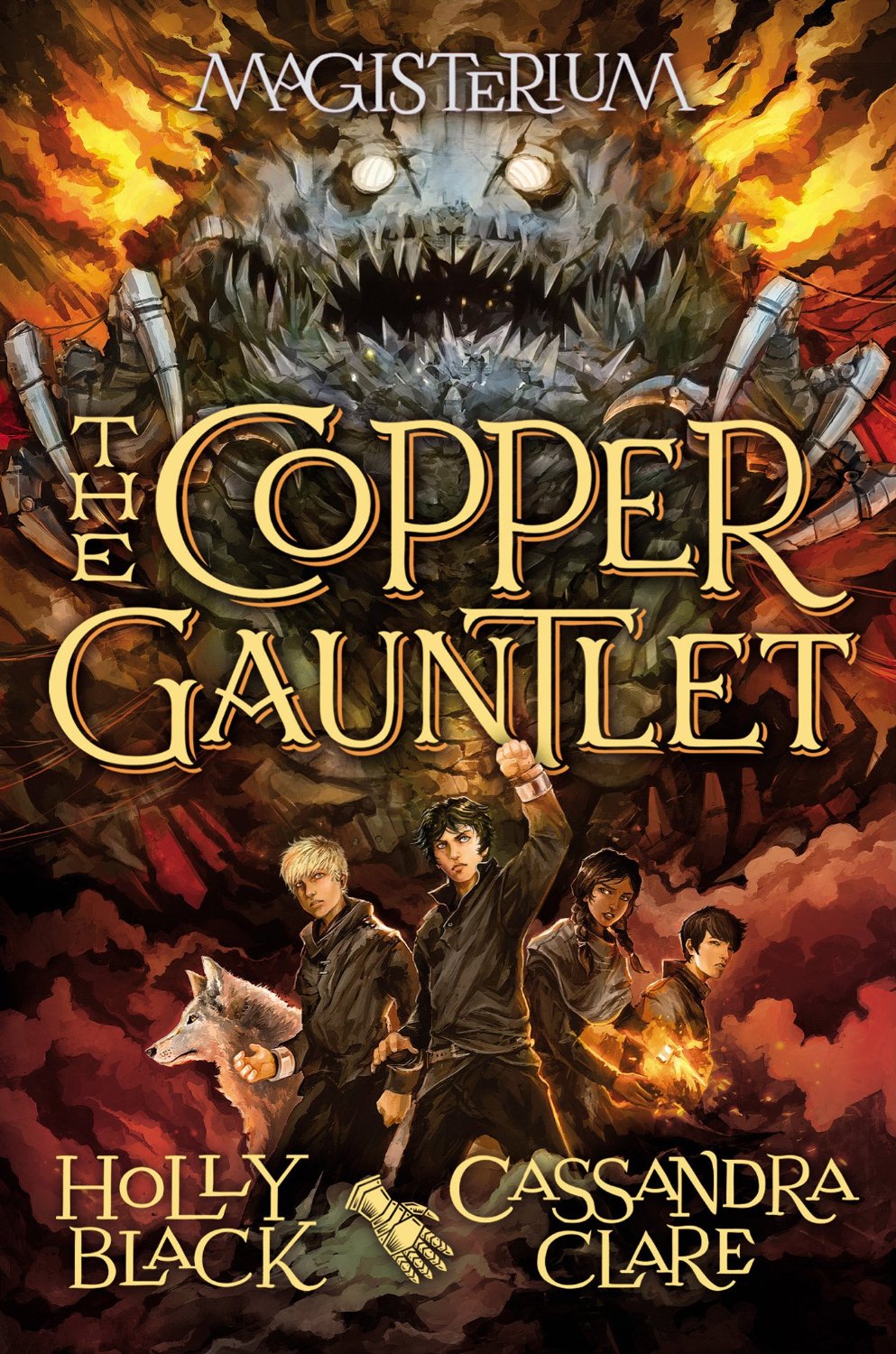 REVIEW: The Copper Gauntlet by Holly Black and Cassandra Clare

After the success of ‘The Iron Trial’, ‘The Coper Gauntlet’ has been one of the most hyped releases of 2015.

Callum Hunt’s summer break isn’t like other kids’. His closest companion is a Chaos-ridden wolf, Havoc. His father suspects him of being secretly evil. And, of course, most kids aren’t heading back to the magical world of the Magisterium in the fall.

It’s not easy for Call . . . and it gets even harder after he checks out his basement and discovers that his dad might be trying to destroy both him and Havoc.

Call escapes to the Magisterium — but things only intensify there. The Alkahest — a copper gauntlet capable of separating certain magicians from their magic — has been stolen. And in their search to discover the culprit, Call and his friends Aaron and Tamara awaken the attention of some very dangerous foes — and get closer to an even more dangerous truth.

I was lucky enough to receive an early copy of this book thanks to Random House Australia, so thank you Random House for sending me this book!

In the second installment of the ‘Magesterium’ series, Callum is faced with many unanswered questions. After the climax of ‘The Iron Trial’, he is left in an awkward situation that doesn’t get any easier when he finds out his dad is trying to destroy him. So, with the help of his pet wolf Havoc and his best friends Tamara and Aaron, Call sets out to find answers on a mission of epic proportions.

‘The Copper Gauntlet’ is one of those books that leaves you like this:

And then, after careful consideration about how the book ends, this:

Because now ‘I’ve got a blank space baby’ and THERE’S NO BOOK TO FILL THE SPACE! Seriously, I need ‘The Cosmos Blade’ like yesterday.

The overall plot of this book was the perfect balance of hilarity and epicness required for the second book in a middle-grade series. Throughout the whole story Black and Clare use a clever undertone of sarcasm and irony that, for older (YA age) readers, is so both fun and hilarious. Although we don’t spend a lot of time at the Magesterium school itself in this book, the plot allows for quite a lot of world-building which, ultimately, adds to the realism of the concept behind the book.

As well as this, the overall message of the book is quite important and morally uplifting. If I gave details it would be a spoiler, however, so you are going to have to read this series to find out!

BUT I WILL WARN YOU NOW… BE PREPARED FOR SOMETHING…

So, if you took the persona of Taylor in that gif right there, and placed it into a middle-aged father’s body, you would get the psychopathic douche canoe that is Alistair Hunt. Seriously. Callum’s Dad in this book… worst father of the year for sure. On another note, the character development that we see between ‘The Iron Trial’ and ‘The Copper Gauntlet’ is quite extreme. We see our trio grow up quite a bit between the books as well as Havoc the wolf who is surprisingly bigger than he was in the last book.

As a whole, the characters that populate this series still feel a little underdeveloped at this point in time, however, I guess this is something that will develop more as the series progresses.

We see the character of Jasper develop tremendously in this book due to developing plot points, which is interesting in terms of where the series is going. Jasper has become a larger part of the story and we can only assume he will become a very important character in future books.

As a middle-grade novel, ‘The Copper Gauntlet’ doesn’t offer much in terms of writing. The level of vocabulary and sentence structure is quite basic and simple. Because of this, the story does lose some potential, however being middle grade, that was an obvious aspect the authors had to sacrifice. The short sentence structure and low vocabulary do work well in some parts of this book, however, there are parts that could really have benefited from a more complex writing style.

Overall, ‘The Copper Gauntlet’ is a spectacular second installment to the ‘Magesterium’ series offering twists and turns that keep the reader guessing until the end. Just like the first book, the authors do an amazing job of misleading readers into what they think is going to happen before flipping the story on its head with a huge plot twist. If you enjoyed the first book I would highly recommend continuing with the series. It is going places.

This series is going places

Hillarious and epic with a great message.