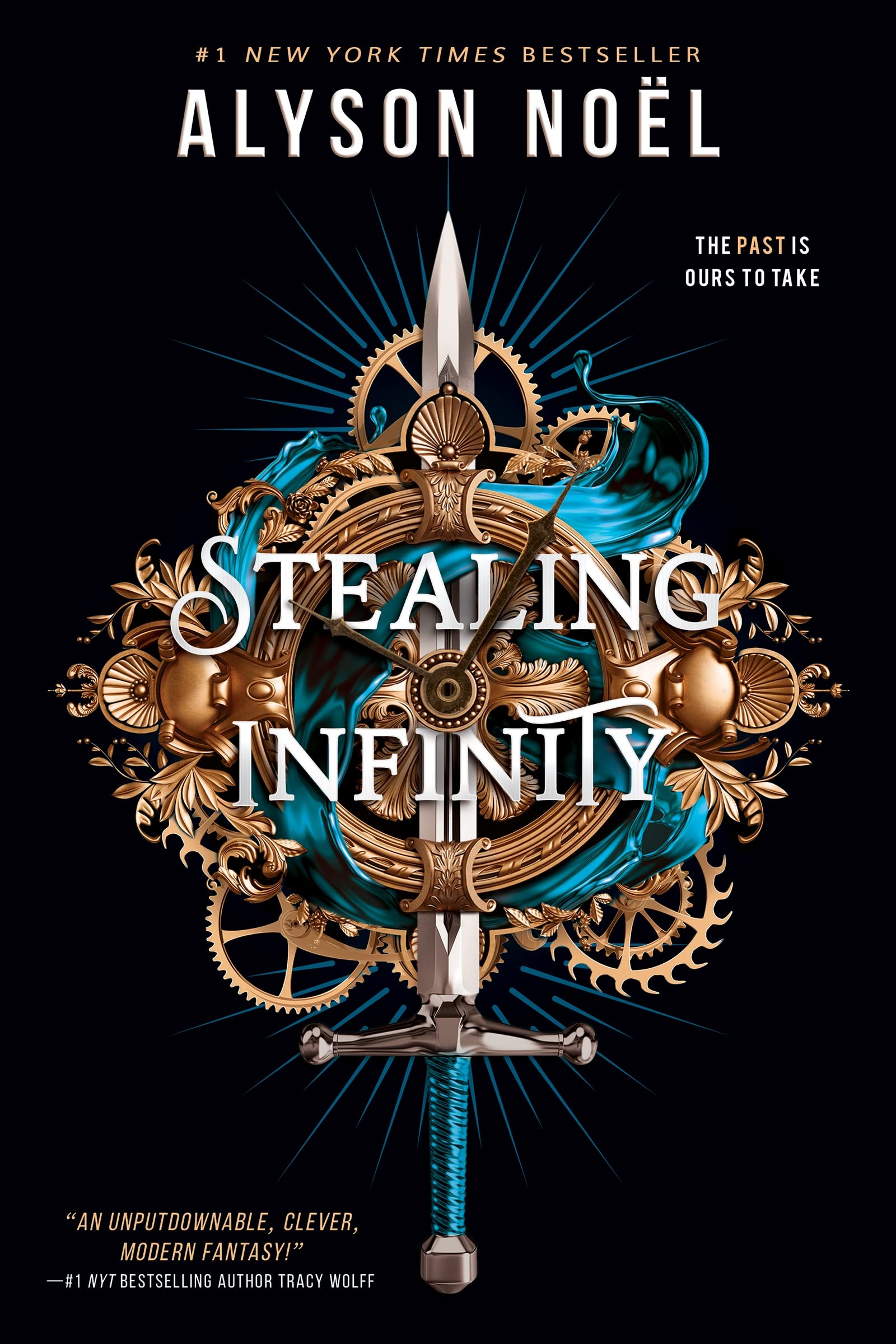 Natasha’s hidden past comes rushing back to her as she navigates the lies and deceit of Gray Wolf Academy.

Stealing Infinity by Alison Noël tells the story of a girl who’s asked to help reshape the world, one time travelling trip at a time.

These days, I’ve been killing it when it comes to letting people down. Now I’ve been kicked out of high school, arrested, and accepted into a remote, off-the-grid school owned and operated by an inscrutable billionaire tech guru.

Gray Wolf Academy is looking for a certain kind of student. Ones that no one will miss. Like me.

Then there’s Braxton. The beautiful, oddly anachronistic guy who showed up right when the trouble started. And he’s a total enigma — which means that I definitely can’t trust him, even if there’s something about him that makes me want to.
They all tell me I have a gift. A very rare gift. And Gray Wolf Academy wants me to learn it. To use it. Because if what they say is true, I have all the time in the world.
And that makes me the most dangerous high school student you’ll never know…

When we meet Natasha, she has pretty much given up on succeeding, which makes the opportunity she’s given at Gray Wolf Academy all the more challenging because she simply cannot afford to fail. This, along with a desire to gain Arthur’s approval and mess with Elodie drives Natasha to succeed at all cost, including changing aspects of her personality. Natasha’s character blooms under pressure; she’s smart, willing to fight, shrewd but can also be manipulative and hurtful when she doesn’t keep herself in check. In an interesting writing choice, walking that fine line becomes harder and harder as the book progresses, leaving us with a far more morally dubious character than what we started out with.

Alison Noël also makes of Natasha a very feminist character, if a little too feminist. As the book is told in first person POV, we get access to all of Natasha’s thoughts on how women were treated in the past, with passages greatly exaggerating how bad it was. One particularly glaring example is the topic of historical clothing, particularly the corsets. Natasha frequently complains about having to wear them even though, historically, they served as the chief supportive undergarment women wore. In a book where Noël has taken the time to make modern fashion a central theme, it is disappointing to see historical clothing not given the same treatment. This, along with certain other comments throughout, convey a very reductive view of women through history, rather than giving the topic the nuance it deserves.

From the side characters, Elodie is undoubtedly the most interesting. What starts out as a typical mean girl character gains layers as her backstory is revealed. In the beginning she’s the vapid, pretty rich girl who drags Natasha down with her, then she becomes her rival, even enemy, behind a veneer of innocence, until Natasha looks at things differently and realises there is more to Elodie.

Plot-wise, Stealing Infinity by Alison Noël feels unfinished. Much of the first half of the book focuses on Natasha’s training and her navigating of the relationships around her, so once the action begins, it’s concentrated in the second half making it rushed and lacking a concrete resolution. Already in the prologue, Noël inserts hints that all is not as it seems when it comes to Arthur Blackstone, but they are left unexplained which only confused me more. While I know this is a set up for later, some aspects could have been revealed here to better further the plot and establish the world.

The world of Stealing Infinity is one of subterfuge and deceit centred around time travel. Gray Wolf Academy comes off as an almost magical place where any needs and wants a student may have are immediately taken care of: it’s light years ahead of technology elsewhere and it has an exciting secret. The mechanics of time travel are barely explained. Instead Noël focuses on how art and aesthetic reflect her characters’ personalities and intentions. Thankfully, for the unobservant reader like me, Noël explains what each aesthetic choice means, often bringing the scene to life in minute detail, so much so that I could easily picture what was going on, down to what everyone was wearing.

Overall Stealing Infinity by Alison Noël confused and disappointed me. Where I caught glimpses of the series’ potential in the scenes with the other time travelling group, the lack of exposition left me frustrated, while I didn’t connect with any of the characters enough to make an impact. I’m sure this book will appeal to some readers out there, it is simply not for me.