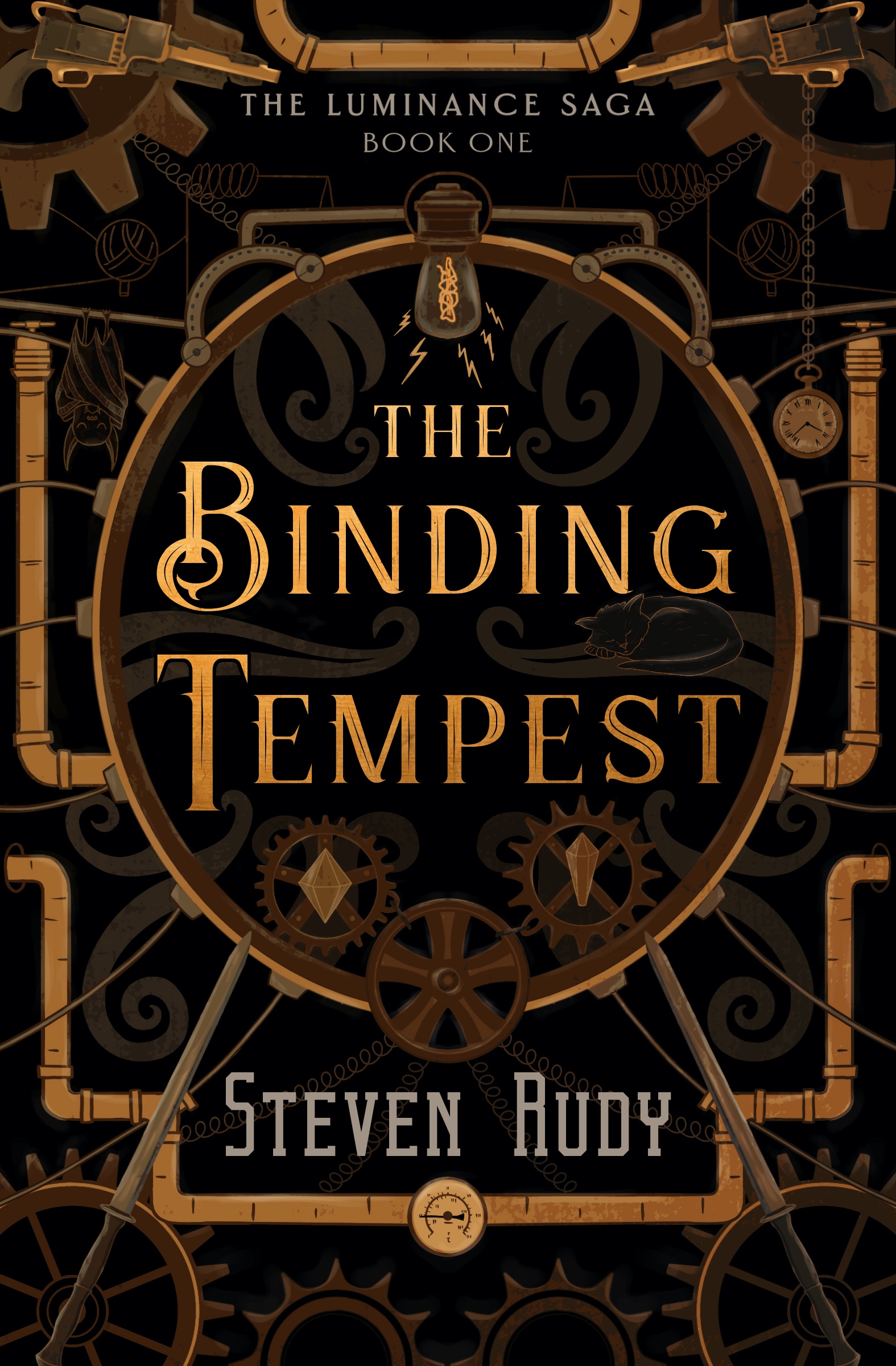 REVIEW: ‘The Binding Tempest’ by Steven Rudy has a lot of potential

Who can resist a found family fighting an oppressive regime?

The Binding Tempest by Steven Rudy asks what happens when people grow so comfortable with freedom that they neglect to see the rise of a new dictator in a world that blends steampunk with high fantasy.

A fallen empire, a failed republic, and a frontier of alchemy, magic and machines…

An age of alchemy, magic and machines has arrived in the wake of a fallen empire that left the world lost and vulnerable. In the war-torn cities, where gas lamps glow, an ancient threat stalks the energy of souls.

Ellaria Moonstone, a hero of the Great War, has spent the last forty years trying to rebuild. But when she is suspiciously requested to attend a meeting at the Ascendancy Tower in Adalon, she discovers the Coalition of Nations has fallen under the control of a new Sagean Dark Lord. A luminary with the power to control energy, has finally emerged to reclaim the vacated throne. With no one left to trust, Ellaria sends for help from old allies scattered across the chaotic frontier.

Now three aging veterans, and a band of young rogues, are all that can protect the failing republic from the return of an evil empire. Together, their only hope lies buried with the mysteries of the past and an ancient relic called the Tempest Stone.

Steven Rudy’s debut novel gives us a character-driven story about a world on the brink of disaster. Having left the oppressive Sagean empire in the past, the people fail to realise the quiet instalment of a new oppressive regime, while a greater existential threat looms in the distance. It all comes down to a ragtag group of six people to stop it.

The characters grew on me as the novel went on. Split into two groups, we first meet the old revolutionaries who overthrew the dictatorial empire forty years prior. Ellaria, Kovan and Elias remain a force to be reckoned with, especially Ellaria as she’s the first to suspect something is amiss and effectively drives the group’s decisions. From the younger generation, Tali stands out in this book. Wade often came off as the wacky sidekick, though he does have some important moments, with Learon being the most discreet. There are hints of his abilities throughout and his family history make him a character to look out for. The side characters stood out less than I’d like, but I do hope to see more of some of them in future books.

The actual villain of the story was a surprise. The entire book talks about the new Sagean, but I would have never guessed who it actually was, making that plot twist delightful. Throughout, their tactics were extensive enough that their presence was felt strongly. Yes, the characters talk about a rise of a new empire, but Rudy also brings these changes to the setting through increased security and geopolitical machinations, among other things.

The worldbuilding is expansive. The extensive descriptions, the history lessons provided by the characters, and the many locations we visit throughout make this world feel old and lived in. Each city has a particular feel to it, while the history we get is backed up by artefacts, ruins, even the odd archaeological dig here and there. While I’m still a little unclear about some small details, I’m excited to see how Rudy will expand from here.

However, the writing was, overall, the worst part of the novel. The first few chapters jump POVs, so it was already a little confusing, but the dense writing made it even harder to get through. There were pages of descriptions at times, while characters often went out of their way to explain a specific phrase or object instead of letting the reader figure it out from context. As such, the dialogue was often stilted, while the inner monologues of the characters were much wordier than they needed to be, especially for the first half of a high fantasy book. The pacing did get better further into The Binding Tempest as the plot took over for the worldbuilding, really showing Rudy’s potential as an author.

The Binding Tempest by Steven Rudy has a lot of potential. A captivating story with dynamic characters is buried beneath the dense writing while the fascinating world is the cherry on top. I look forward to seeing where he takes it because that epilogue opened up a new realm of possibilities.