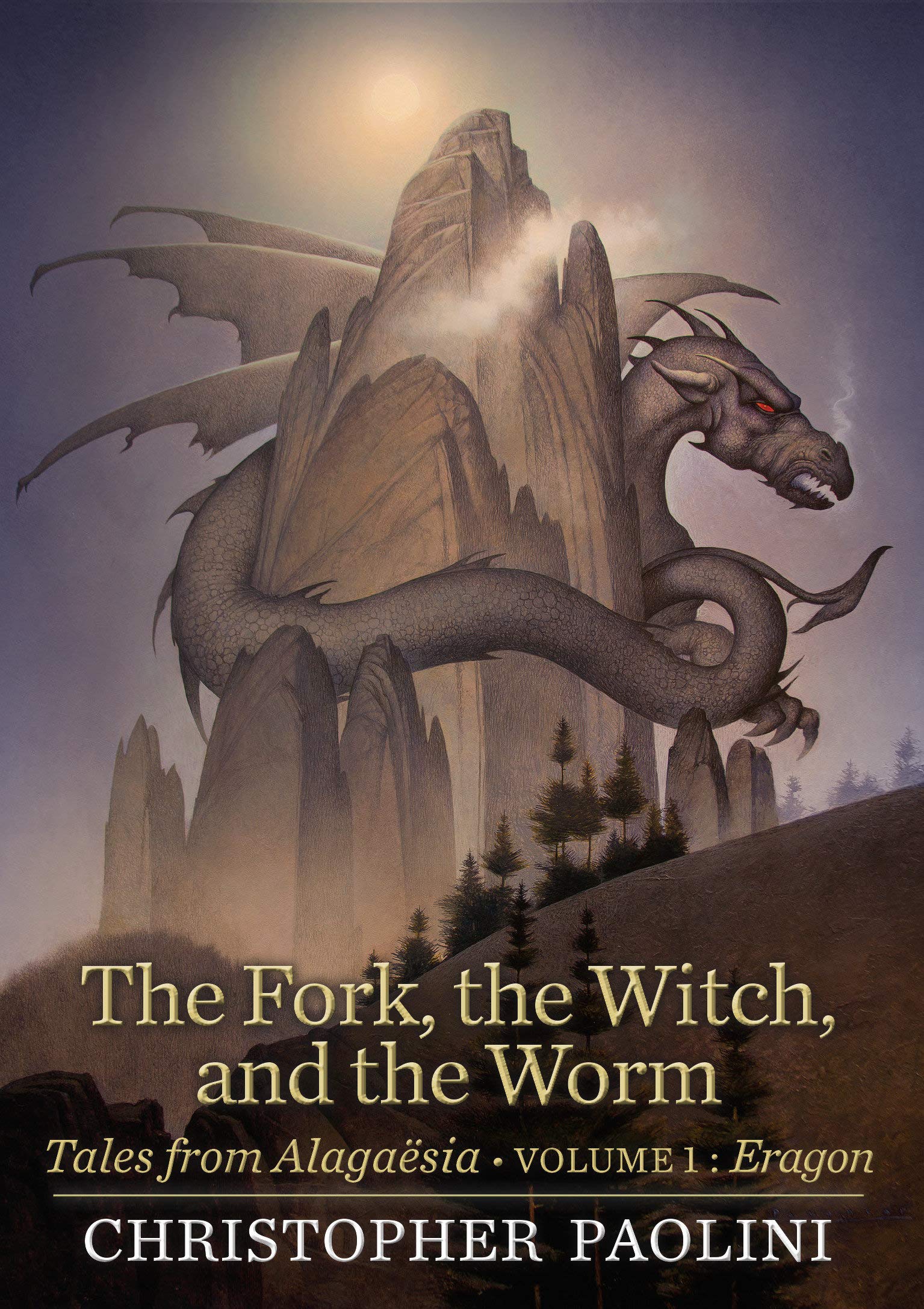 'The Fork, the Witch, and the Worm' by Christopher Paolini. (Penguin Random House)

REVIEW: ‘The Fork, The Witch, and The Worm’ by Christopher Paolini lacks in magic

This book doesn’t add much to Paolini’s exciting world of dragons.

Christopher Paolini’s return to Alagaësia opens with Eragon being bored. And that, unfortunately, sets the tone for the rest of the book.

A wanderer and a cursed child. Spells and magic. And dragons, of course.

Welcome back to the world of Alagaësia. It’s been a year since Eragon departed Alagaësia in search of the perfect home to train a new generation of Dragon Riders. Now he is struggling with an endless sea of tasks: constructing a vast dragonhold, wrangling with suppliers, guarding dragon eggs, and dealing with belligerent Urgals and haughty elves. Then a vision from the Eldunarí, unexpected visitors, and an exciting Urgal legend offer a much-needed distraction and a new perspective. This volume features three original stories set in Alagaësia, interspersed with scenes from Eragon’s own unfolding adventure. Included is an excerpt from the memoir of the unforgettable witch and fortune-teller Angela the herbalist . . . penned by Angela Paolini, the inspiration for the character, herself! Relish the incomparable imagination of Christopher Paolini in this thrilling new collection of stories based in the world of the Inheritance Cycle.

The Fork, the Witch, and the Worm isn’t like Paolini’s past works. While it may deal with dragons, urgals and dwarves, the book is an anthology of sorts — a collection of three short stories. However, each story feeds into the next, making it read more like a novella than anything else. No problem with that.

The problem is that it’s — mostly — boring.

I’m not a hater. I was a massive fan of Paolini growing up. (Many years before founding Bookstacked, a friend and I ran a massive Inheritance Cycle forum/fansite called Brisingr. We were dragon nerds.) In fact, my dissatisfaction with this book maybe comes from my affection for those earlier stories.

This isn’t much of an adventure like Eragon is. There are no shades or ra’zac at the heels of our characters. In fact, my feelings toward this book were mirrored in Eragon’s own thoughts. Set roughly a year after the final book in the Inheritance Cycle, Eragon laments his past days of adventure. So do I.

Maybe it isn’t fair to look for that sort of excitement in a book like this. It’s a short followup, after all. It was never billed as a brand new adventure. The Fork, the Witch, and the Worm primarily serves to expand the lore of the world and add a couple of thin layers to a few established characters. But I found my mind wandering a lot as I read. I didn’t care much for some of the characters — particularly the new ones.

That’s not to say it’s all bad.

The first of the short stories, ‘The Fork,’ is actually delightful and very well done. Without spoiling much, it reconnects readers with a fan favorite. And its new character, a little girl named Essie, is charming and sweet. Paolini did a masterful job at building the relationship between these two characters in a short amount of time. Even better, he does so while orchestrating a creeping suspense that evolves into an exciting — albeit small — climax. His ability to succinctly pour so much into these two characters makes it some of his best writing to date.

As for the succeeding stories: they lack the thrill of the first.

The second seems more reflective than anything, missing a lot in the plot department. And the third story, while swollen with a large-scale conflict, unfortunately, lacks emotional draw from the characters. Those shortcomings make it difficult to connect with the small messages and themes Paolini wants to convey.

It’ll be interesting to see what comes next. The book is subtitled “Volume I: Eragon,” meaning that there’s surely more of these tales to come.

Paolini once said it would take him 30 years to tell all the stories of Alagaësia that he has in his head. Regardless of however long it takes for him to tell those stories, I hope he recaptures some of that early magic along the way.

Alagaësia — but without its charm

+ Plot: There isn’t much in this department. The book only exists to add a little here and there to the world.

+ Characters: It’s nice to hear the voices of some of the old characters. But they mostly feel flat — and that’s especially true of the new characters.

+ Writing: Paolini does a beautiful job in ‘The Fork.’ It may showcase some of his best writing.

+ Theme/Message: While there are little moral messages throughout, they lack in substance.