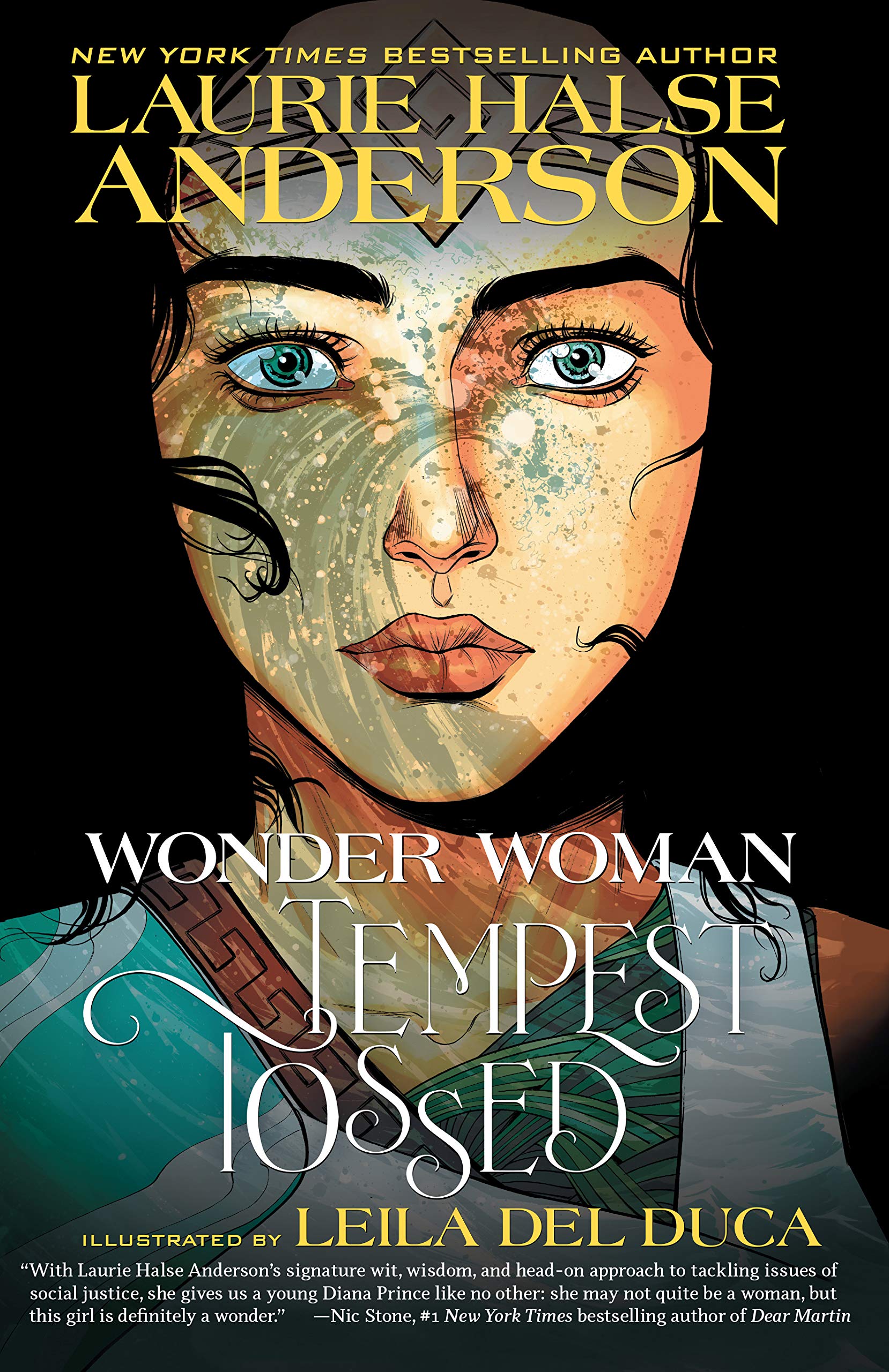 Wonder Woman: Tempest Tossed by Laurie Halse Anderson and Leila del Duca modernises Diana’s backstory in order to adapt it to our own troubled times–thus making it more both more relatable and more poignant its readers.

Princess Diana believes that her 16th birthday will be one of new beginnings–namely acceptance into the warrior tribe of Amazons. The celebrations are cut short, however, when rafts of refugees break through the Themysciran barrier. Diana tries to help them, but she is swept away by the sea–and from her home–thus becoming a refugee herself.

Now Diana must survive in the world outside of Themyscira for the first time; the world that is filled with danger and injustice. She must redefine what it means to belong, to be an Amazon, and to make a difference.

Wonder Woman: Tempest Tossed is a story about growing into your strength, battling for justice, and the power of friendship

Laurie Halse Anderson doesn’t pull any punches in this iteration of Wonder Woman’s origin story, as the reader is thrust into the thick of the Greek refugee crisis a mere 40 pages in. Meanwhile, Leila del Duca brings the harsh conditions to life through her vibrant illustrations of both the environment and Diana’s expressions. Her outrage, disgust, and restlessness come through loud and clear.

The plot is well structured and well written. Despite the multitude of themes addressed in it, I enjoyed the fast pace. There is a good balance between the action packed sequences and the filler scenes that bring information on both Diana’s inner thoughts, as well as the backstory of the secondary characters. I especially liked Diana’s scenes with Henke, and how her relationship develops with Raissa.

However, there were a lot of big themes this book tackled, maybe even too many. Weaving the refugee crisis into Diana’s backstory was incredibly poignant, but there is little time dedicated to it before Diana is whisked off to the USA by Steve and Dr. Trevor. Similarly, the story skirts over teenage activism and its consequences, the impact of gentrification, homelessness and even the subject of human trafficking in order to fit it all in. Of course they all exist simultaneously in our own reality, but gathering them in a single origin story diminishes their impact on the reader.

My favourite aspect of this graphic novel was, by far, the characters. Diana is such a well rounded character; she really stood out. She’s dynamic, emotional, naïve and so, so caring, but she still remains a teenager. This also extends to Raissa, who’s maturity and level-headedness are balanced by her reactions when she’s surprised or embarrassed in front of her friends. As for the secondary characters, Henke, Steve and Trevor all shine through; their kindness towards Diana and people in general is absolutely heartwarming. Each brings a specific quality to the story that allows Diana to understand and empathise with this new world.

Finally, a few more words on the art. Leila del Duca’s art style is gorgeous. Themyscyra is lush and vibrant. The Amazons are diverse in both size and skin tone but their style stays true to their Ancient Greek origins. My favourite example of this was Diana, who has a prominent nose and unruly, curly black hair: typical Mediterranean features.

Wonder Woman: Tempest Tossed brings every location to life: the refugee camp conveys the people’s stark reality, and Queens has an unpolished feeling that brings forth the less palatable aspects of New York City without being overwhelming.

Wonder Woman: Tempest Tossed by Laurie Halse Anderson and Leila del Duca modernised Diana’s character. A 16yo Diana is already relatable to a younger audience, but everything she faces make this book a moving take on this iconic superhero.