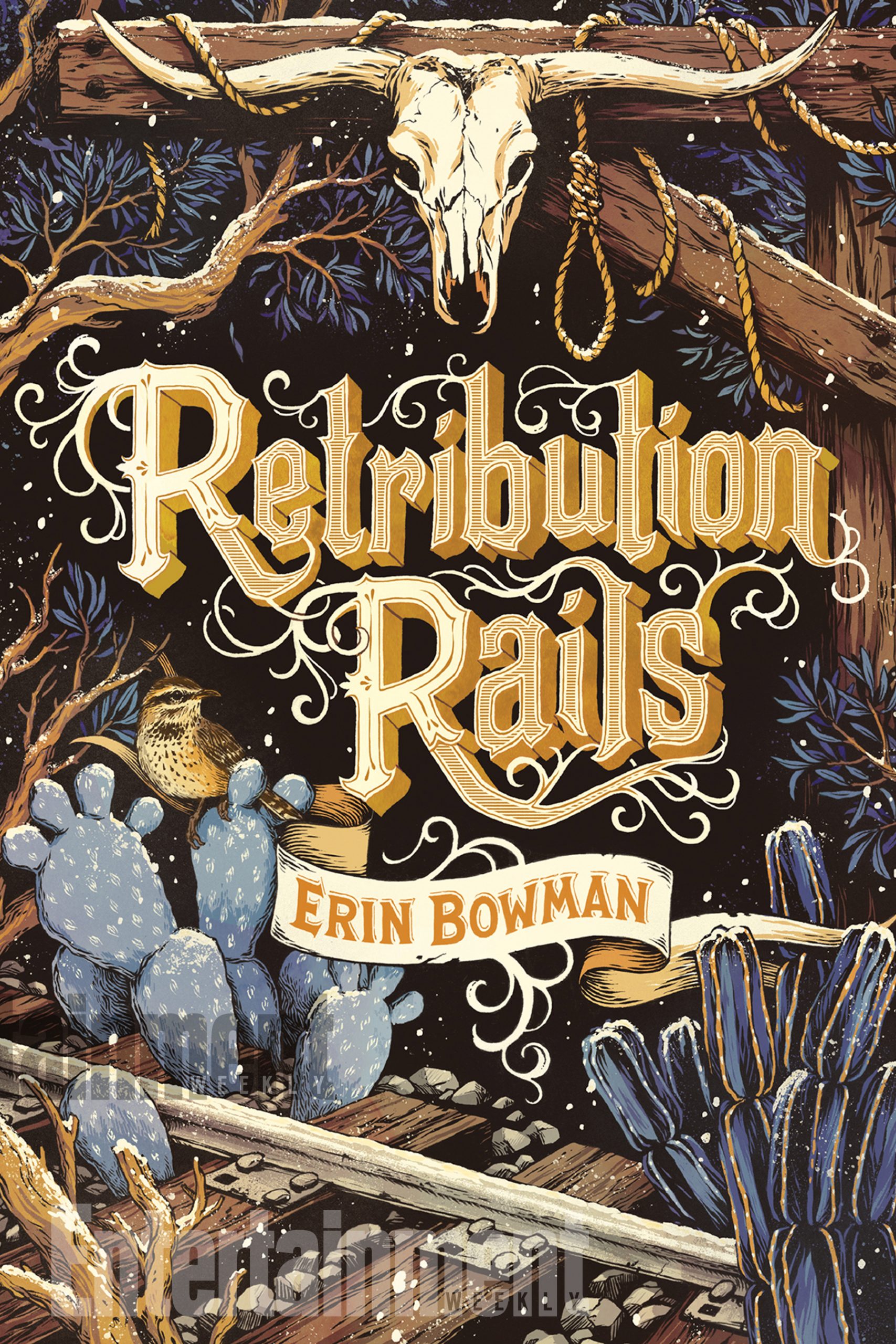 Retribution Rails not only equals the successes of Vengeance Road, but surpasses them.

I was lucky enough to be a part of the street team for Erin Bowman’s VENGEANCE ROAD in 2015, a novel which quickly became one of my favourite books of the year. When it was announced that a companion novel, RETRIBUTION RAILS, was going to be released this year, I was more than excited for it. The story of the first book was over, but there was clearly more than enough room for more stories to be told in the world that Erin had carefully crafted.

Thanks to HMH Teen for supplying an e-galley of this book in exchange for an honest review.

When Reece Murphy is forcibly dragged into the Rose Riders gang because of a mysterious gold coin in his possession, he vows to find the man who gave him the piece and turn him over to the gang in exchange for freedom. Never does he expect a lead to come from an aspiring female journalist. But when Reece’s path crosses with Charlotte Vaughn after a botched train robbery and she mentions a promising rumor about a gunslinger from Prescott, it becomes apparent that she will be his ticket to freedom—or a noose. As the two manipulate each other for their own ends, past secrets are unearthed, reviving a decade-old quest for revenge that may be impossible to settle.

In this thrilling companion to Vengeance Road, dangerous alliances are formed, old friends meet new enemies, and the West is wilder than ever.

As with Vengeance Road, the writing of Retribution Rails becomes somewhat of a character itself. Reece’s narration is the most in tune with Kate’s from the previous novel, having been raised on the same gritty plains of the wild west. However, the chapters from Charlotte’s perspective showcase a more sophisticated voice. Her upbringing mirrors Reece’s; she has lived in a progressing town to a business-oriented family and dreams of following her idol, Nellie Bly, into a life of journalism.

The characters themselves are arguably the best part of the story. Charlotte is such a welcomed departure from the world we already know in Vengeance Road. She’s stubborn and naive, but in the most endearing way. She’s relentless in chasing her dreams, and shows throughout the novel that–while maybe she doesn’t see it herself–she’s more than open to changing her outlook. On the other hand, Reece ties us back to Vengeance Road. Much like Kate, he’s lived in the wildest parts of the wild west. For years he’s been riding with a gang that he’ll do anything to break away from. Their two stories of revenge and redemption entwine together very naturally, while they both challenge each other to become better as the novel progresses.

The two narrators each bring a gripping side to the story, one that leaves the reader hanging at the end of almost every chapter. While cliffhanger endings on every chapter can sometimes become tiresome, in Retribution Rails, Bowman seems to master a balance. Both characters have their own stories taking place alongside the overarching narrative, meaning there’s never a dull chapter, never a jarring jump between the action-packed chapters and the more subdued chapters allowing for character development.

The setting feels familiar but fresh, too. Bringing the same grittiness of late-1870’s Arizona from Vengeance Road, but spicing it with ten-years-later ‘modernisations’ such as the arrival of a train line to one of the novels central towns, brings everything up to a new level. While Vengeance Road sometimes fell back on its unique and intriguing setting, Retribution Rails never does. The setting is established early on and is a consistently strong backdrop for the story.

Replicating the successes of Vengeance Road was always going to be a challenge, but with Retribution Rails, Erin Bowman has shown that she was more than up to the task. Bowman has taken the highlights of the previous novel, from the worldbuilding through a unique style of writing to a few cameos by some of the cast of Vengeance Road, and incorporated them into an updated world with higher stakes and more in-depth characters, crafting a follow-up that doesn’t just equal the first novel, but surpasses it.

Better than the first

> Plot: As action-packed as Vengeance Road, but with higher stakes than the previous novel.
> Writing: Extremely strong and consistent, the same unique flair as the previous novel but with the added bonus of Charlotte’s fresh narration.
> Characters: Arguably the highlight of the book, two phenomenally grown characters who both feel realistic with their own gripping stories.
> Theme: Themes of retribution and redemption at the forefront, with threads of family and loyalty throughout.