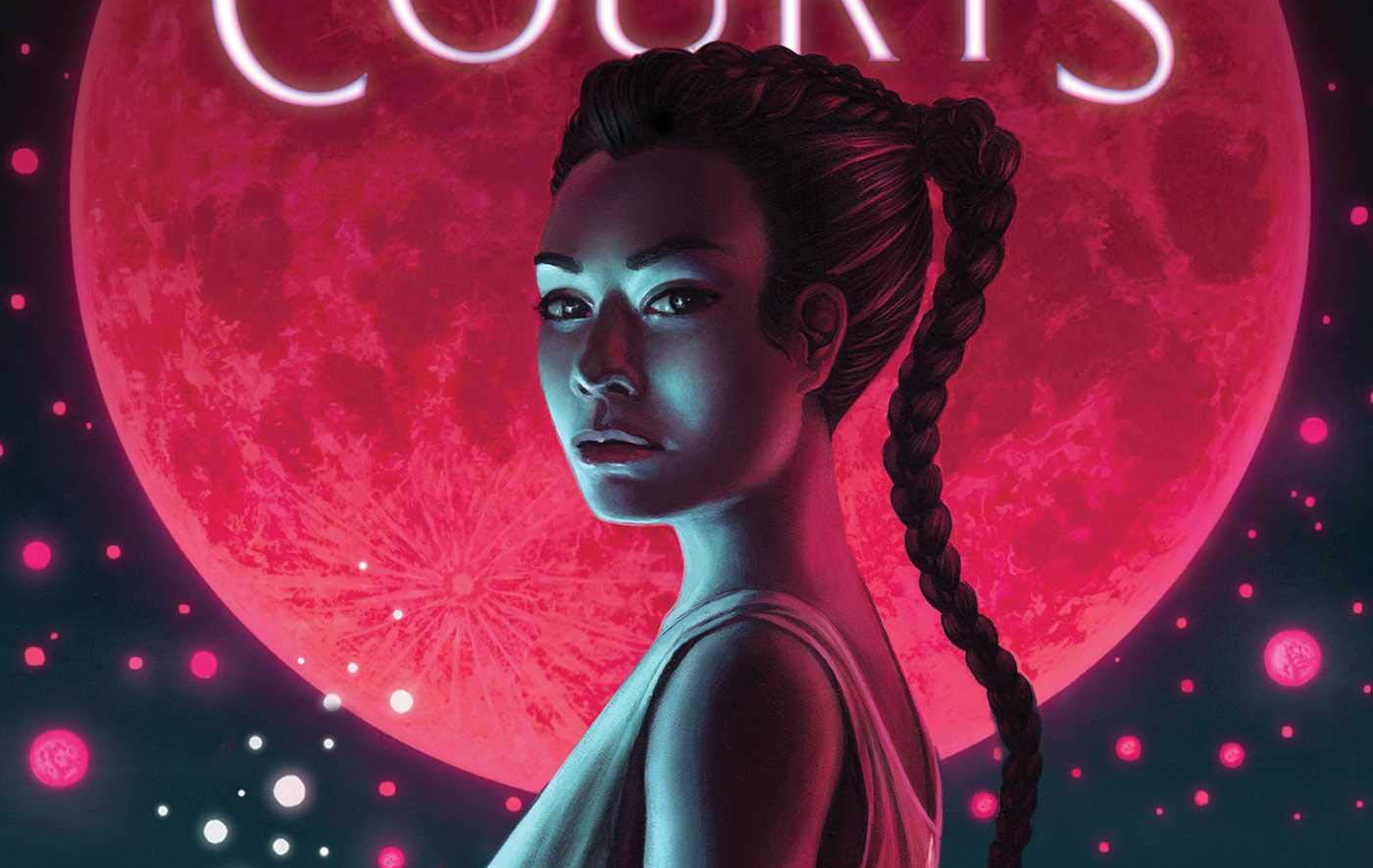 Here’s what April’s new releases have in store for readers.

Akemi Dawn Bowman’s highly anticipated sci-fi, The Infinity Courts, will take readers to the afterlife … but one ruled by an AI that’s out for vengeance. (Be nice to Siri, folks!)

Emily A. Duncan’s Something Dark and Holy trilogy will also see its final installment released this month in Blessed Monsters, which promises a dark and thrilling conclusion. And Becky Albertalli returns in her upcoming novel, Kate in Waiting.

Here’s a full look at April’s other YA book releases, with a little bit about each from the publishers.

Westworld meets Warcross in this high-stakes, dizzyingly smart sci-fi about a teen girl navigating an afterlife in which she must defeat an AI entity intent on destroying humanity, from award-winning author Akemi Dawn Bowman.

Blessed Monsters by Emily A. Duncan

The startling conclusion to the instant New York Times bestselling Something Dark and Holy trilogy. The girl, the monster, the prince, the queen. They broke the world. And some things can never be undone. In Emily A. Duncan’s Blessed Monsters, they must unite once more to fight the dark chaos they’ve unleashed – but is it already too late?

The exhilarating sequel to the #1 Sunday Times and Los Angeles Times bestseller Nocturna, about a face-changing thief and a risk-taking prince who must reunite when a deadly enemy threatens their kingdom’s chance at establishing a global peace. Perfect for fans of Tomi Adeyemi, Sabaa Tahir, and Stephanie Garber.

House of Hollow by Krystal Sutherland

A dark, twisty modern fairytale where three sisters discover they are not exactly all that they seem and evil things really do go bump in the night.

Go the Distance by Jen Calonita

The 11th installment in the New York Times best-selling A TWISTED TALE series asks: What if Meg had to become a Greek god?

Zara’s family has waited years for their visa process to be finalized so that they can officially become US citizens. But it only takes one moment for that dream to come crashing down around them.

The Cost of Knowing by Brittney Morris

Dear Martin meets They Both Die at the End in this gripping, evocative novel about a Black teen who has the power to see into the future, whose life turns upside down when he foresees his younger brother’s imminent death, from the acclaimed author of SLAY.

Pride and Premeditation by Tirzah Price

Perfect for fans of the Lady Janies and Stalking Jack the Ripper, the first book in the Jane Austen Murder Mysteries series is a clever retelling of Pride and Prejudice that reimagines the iconic settings, characters, and romances in a thrilling and high-stakes whodunit.

Where the Road Leads Us by Robin Reul

Jack is on the verge for leaving for college, but before he does, he wants to track down his estranged brother, Alex and find some closure in the wake of their father’s death. Meanwhile, Hallie has just found out some upsetting news about a friend in Oregon, and she has a small window to go see him before it’s too late. Jack and Hallie are practically strangers. They shared a class together years ago and haven’t seen each other since, though they have more in common than they’d ever imagine. And when fate puts them into the same rideshare to the bus terminal, it kicks off an unconventional and hysterical adventure that may lead them to their own true selves … and maybe to each other.

Kisses and Croissants by Anne-Sophie Jouhanneau

As sweet as a macaron from Laduree, with writing as crisp as a freshly baked baguette, this romantic novel set in Paris about an American ballerina and a charming French boy is parfait for fans of American Royals and Netflix’s To All the Boys I’ve Loved Before.

The Sky Blues by Robbie Couch

Sky’s small town turns absolutely claustrophobic when his secret promposal plans get leaked to the entire school in this witty, heartfelt, and ultimately hopeful debut novel for fans of What if it’s Us? and I Wish You All the Best.

The Murder Game by Carrie Doyle

A murder at a boarding school is gruesome enough, but what if the murderer is your roommate? Perfect for fans of A Study in Charlotte comes a gripping prep school novel filled with dark mystery and suspense.

Somewhere Between Bitter and Sweet by Laekan Zea Kemp

I’m Not Your Perfect Mexican Daughter meets Emergency Contact in this stunning story of first love, familial expectations, the power of food, and finding where you belong.

Between the Bliss and Me by Lizzy Mason

Acclaimed author Lizzy Mason delivers a moving contemporary YA novel about mental illness, young romance, and the impact of family history on one teen’s future, perfect for fans of Jandy Nelson, Robin Benway, and Kathleen Glasgow.

What Beauty There Is by Cory Anderson

What Beauty There Is is Cory Anderson’s stunning YA novel about brutality and beauty, and about broken people trying to survive–perfect for fans of Patrick Ness, Laura Ruby, and Meg Rosoff.

The Flipside of Perfect by Liz Reinhardt

A heartfelt, fun, and romantic novel about balancing who we are with who we’re expected to be, perfect for fans of Jenna Evans Welch, Morgan Matson and Jenn Bennett!What happens when her two worlds collide?

Zoe Rosenthal Is Not Lawful Good by Nancy Werlin

My Epic Spring Break (Up) by Kristin Rockaway

A fun and upbeat paperback original romance about a girl who finds a cheat sheet for love.

The Prison Healer by Lynette Noni

Seventeen-year-old Kiva Meridan has spent the last ten years fighting for survival in the notorious death prison, Zalindov, working as the prison healer. When the Rebel Queen is captured, Kiva is charged with keeping the terminally ill woman alive long enough for her to undergo the Trial by Ordeal: a series of elemental challenges against the torments of air, fire, water, and earth, assigned to only the most dangerous of criminals. Then a coded message from Kiva’s family arrives, containing a single order: “Don’t let her die. We are coming.” Aware that the Trials will kill the sickly queen, Kiva risks her own life to volunteer in her place. If she succeeds, both she and the queen will be granted their freedom.

Between Perfect and Real by Ray Stoeve

Dean Foster knows he’s a trans guy. He’s watched enough YouTube videos and done enough questioning to be sure. But everyone at his high school thinks he’s a lesbian–including his girlfriend Zoe, and his theater director, who just cast him as a “nontraditional” Romeo. He wonders if maybe it would be easier to wait until college to come out. But as he plays Romeo every day in rehearsals, Dean realizes he wants everyone to see him as he really is now–not just on the stage, but everywhere in his life. Dean knows what he needs to do. Can playing a role help Dean be his true self?

The Serpent’s Curse by Lisa Maxwell

Outsmart Your Enemies. Outrun the Galaxy. Buckle up your seatbelt for this thrilling YA sci-fi adventure set against an intergalactic war from internationally bestselling author Charlie Jane Anders.

Kate in Waiting by Becky Albertalli

From #1 New York Times bestselling author and rom-com queen Becky Albertalli comes a buoyant new novel about daring to step out of the shadows and into the spotlight in love, life, and, yes, theater.

This Jamaican-inspired fantasy debut about two enemy witches who must enter into a deadly alliance to take down a common enemy has the twisted cat-and-mouse of Killing Eve with the richly imagined fantasy world of Furyborn and Ember in the Ashes.

These Feathered Flames by Alexandra Overy

In Deeper Waters by F.T. Lukens

A young prince must rely on a mysterious stranger to save him when he is kidnapped during his coming-of-age tour in this swoony adventure that is The Gentleman’s Guide to Vice and Virtue meets Pirates of the Caribbean.

The Forest of Stolen Girls by June Hur

Suspenseful and richly atmospheric, June Hur’s The Forest of Stolen Girls is a haunting historical mystery sure to keep readers guessing until the last page.

She Drives Me Crazy by Kelly Quindlen

High school nemeses fall in love in Kelly Quindlen’s She Drives Me Crazy, a queer YA rom com perfect for fans of Becky Albertalli and Casey McQuisten.

Delta of Dead River sets out to rescue her family from a ruthless dictator rising to power in the Wastes and discovers a secret that will reshape her world in this postapocalyptic Western mashup for fans of Mad Max and Gunslinger Girl.

Everyone Dies Famous in a Small Town by Bonnie-Sue Hitchcock

A lyrical and heartfelt collection by an award-winning writer that connects the lives of young people from small towns in Alaska and the American west. Each story is unique, yet universal.

The Key to You and Me by Jaye Robin Brown

A sweet and funny ownvoices LGBTQ+ romance perfect for fans of Becky Albertalli and Julie Murphy, from the critically acclaimed author of Georgia Peaches and Other Forbidden Fruit!

What’s Not to Love by Emily Wibberley

An academic enemies-to-lovers YA with all the nerdy drama, high school antics, and heartpounding romance of the Netflix original series Never Have I Ever

Perfect for fans of Courtney Summers, this seductive and intense thriller unfolds in interwoven timelines of two summers as three friends are torn apart by buried secrets and star-crossed attraction…then pulled back together by tragedy.

From bestselling author Danielle L. Jensen comes a thrilling new novel in the Dark Shores world, a series that Sarah J. Maas called, “everything I look for in a fantasy novel.”

Acidly funny and compulsive readable, this debut is a story about two people finding each other and then screwing it all up. See also: soulmate, stupidity, sex, friendship, bad poetry, very bad decisions and all the indignities of being in love for the first time.

Lycanthropy and Other Chronic Illnesses by Kristen O’Neal’

Teen Wolf meets Emergency Contact in this sharply observed, hilarious, and heartwarming debut young adult novel about friendship and the hairy side of chronic illness.

Fade Into the Bright by Jessica Koosed Etting

Five Feet Apart meets Tell Me Three Things in this YA contemporary novel about two sisters, one summer, and a diagnosis that changes everything.

Do plan to pick up any of these books? Which release are you looking most forward to?