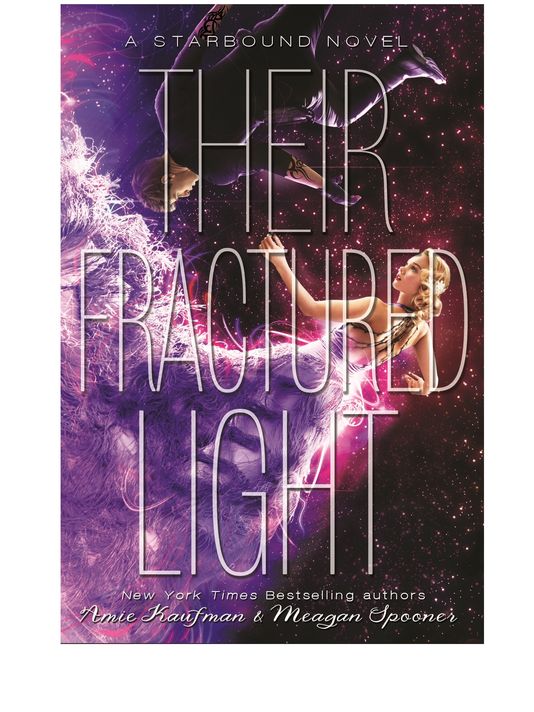 We have the cover reveal for the book, ‘Their Fracture Light’ by authors Amie Kaufman and Meagan Spooner, the third and final book for the ‘Starbound trilogy.’ They sat down with USA TODAY to answer a few questions about it: That cover! What did you think when you first saw it? Amie: Woah. I mean, just … […]

We have the cover reveal for the book, ‘Their Fracture Light’ by authors Amie Kaufman and Meagan Spooner, the third and final book for the ‘Starbound trilogy.’

They sat down with USA TODAY to answer a few questions about it:

That cover! What did you think when you first saw it?

Amie: Woah. I mean, just … woah. The dress was made especially for the photo shoot, and it’s PERFECT. We desperately want to steal it. The model is absolutely, perfectly Sofia, and you can see Gideon’s tattoos, which feature in the book!

Meg: He’s a hacker, and he gets one every time he pulls off a job. It’s safe to say he has a lot of them. We just adore the cover, and it’s such a perfect fit with the others in the series. And for the many, many fans who’ve asked … yes, there will be posters available for the cover of book three! You can sign up for the mailing list at www.thesebrokenstars.com if you want to learn how to get one!

Beyond the cover, can you share something you love about the book?

Meg: Although the three books in this series each tell the story of a different couple, they’ve all been building toward this moment — this book is when we get to bring it all together, and reveal the twists and turns we’ve been planning all along!

Amie: We had SO much fun with this book — there’s a touch of Mr. and Mrs. Smith about this story — neither Gideon nor Sofia are what they seem, nor what the other suspects. Also, explosions and romance. You’re welcome.

The names of the main characters from These Broken Stars and This Shattered World are in the description for this book … does this mean cameos?

Amie: Ha! This has to be our most frequently asked question! This book is definitely Gideon and Sofia’s story — they’re uniquely positioned to bring together what happened to the characters in the first few books. But …

Meg: You can definitely expect to see some familiar faces, and we think fans of every book will be very happy (and shocked, and swooning, and shouting, depending on where they’re up to in the book) with what they see!

Take a look at the cover,

Now, from the publisher:

A year ago, Flynn Cormac and Jubilee Chase made the now infamous Avon Broadcast, calling on the galaxy to witness for their planet, and protect them from destruction. Some say Flynn’s a madman, others whisper about conspiracies. Nobody knows the truth. A year before that, Tarver Merendsen and Lilac LaRoux were rescued from a terrible shipwreck-now, they live a public life in front of the cameras, and a secret life away from the world’s gaze.

Now, in the center of the universe on the planet of Corinth, all four are about to collide with two new players, who will bring the fight against LaRoux Industries to a head. Gideon Marchant is an eighteen-year-old computer hacker known in Corinth’s underworld as The Knave of Hearts. He’ll climb, abseil and worm his way past the best security measures to pull off onsite hacks that others don’t dare touch.

Sofia Quinn has a killer smile, and by the time you’re done noticing it, she’s got you offering up your wallet, your car, and anything else she desires. She holds LaRoux Industries responsible for the mysterious death of her father and is out for revenge at any cost.

When a LaRoux Industries security breach interrupts Gideon and Sofia’s separate attempts to infiltrate their headquarters, they’re forced to work together to escape. Each of them has their own reason for wanting to take down LaRoux Industries, and neither trusts the other. But working together might be the best chance they have to expose the secrets LRI is so desperate to hide.

I don’t know about you, but I’m dying to get my hands on this book!

Take a look at our reviews about this trilogy,