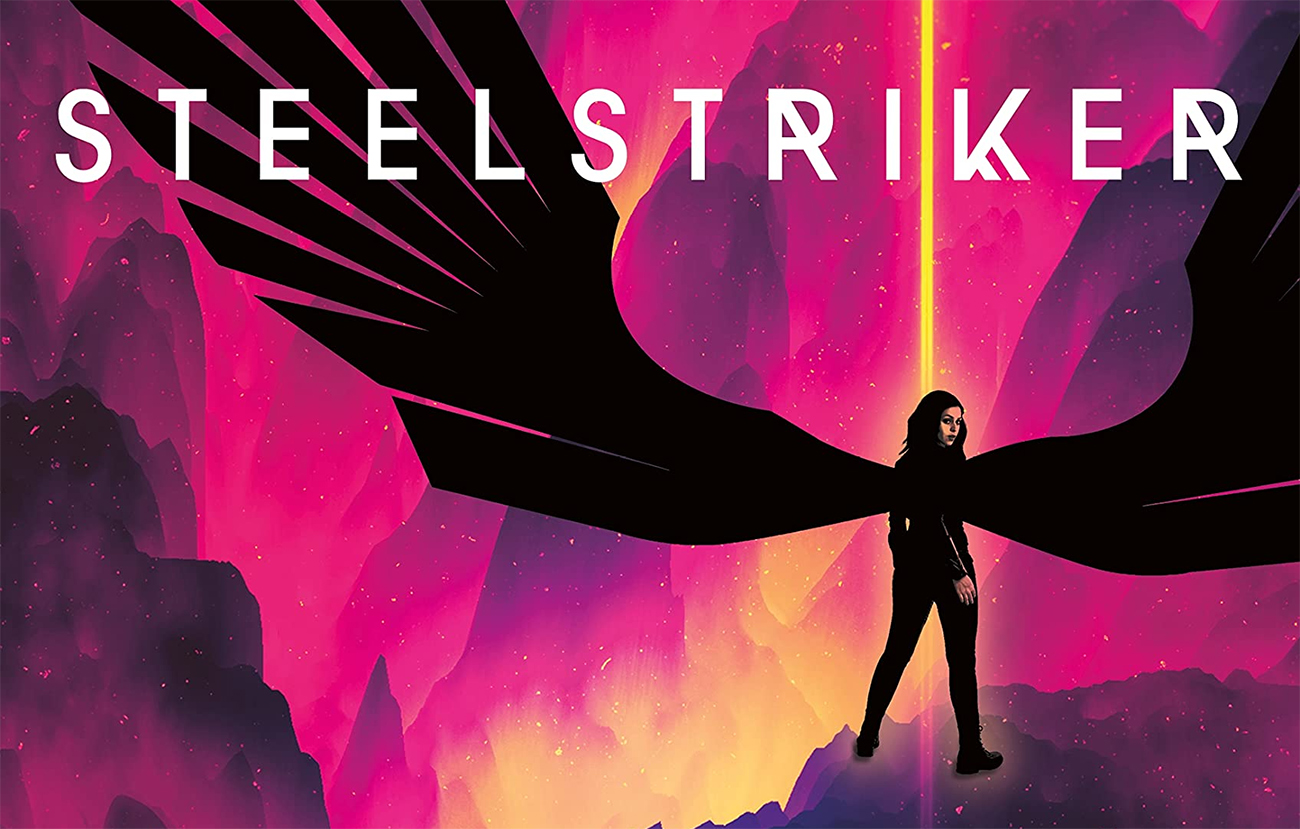 There are SO MANY new YA books to choose from this month. 😍

Marie Lu is no doubt a staple in the YA book scene, and she’s back in force this month with the follow-up to her novel Skyhunter in Steelstriker. The sequel promises to be an explosive conclusion to the duology. But Steelstriker is just one of many YA book releases this September.

Readers might also want to check out science-fiction novel Iron Widow by debut author and YouTuber Xiran Jay Zhao, releasing September 21. Billed as a cross between ‘Pacific Rim’ and The Handmaid’s Tale, this particular novel is stacking up to be one of the most anticipated releases of the season.

There’s a lot more to discover! Your September 2021 YA book guide is below.

The Last Legacy by Adrienne Young

New York Times bestselling author Adrienne Young returns with The Last Legacy, a captivating standalone about family and blood ties, reinventing yourself, and controlling your own destiny.

What Once Was Mine by Liz Braswell

The 12th installment in the New York Times best-selling series asks: What if Rapunzel’s mother drank a potion from the wrong flower?

Intrigue, riches, and romance abound in this thrilling sequel to the New York Times bestselling The Inheritance Games

The Problem with the Other Side by Kwame Ivery

A searing YA debut that follows the joys, complexities, and heartbreaks of an interracial romance between high school sophomores that blossoms during a volatile school election.

So Many Beginnings: A Little Women Remix by Bethany C. Morrow

Four young Black sisters come of age during the American Civil War in So Many Beginnings, a warm and powerful YA remix of the classic novel Little Women, by national bestselling author Bethany C. Morrow.

A Clash of Steel: A Treasure Island Remix by C.B. Lee

Two intrepid girls hunt for a legendary treasure on the deadly high seas in this YA remix of the classic adventure novel Treasure Island.

Among Thieves by M.J. Kuhn

A thrilling fantasy debut—a high-stakes heist novel set in a gritty world of magic and malice, and perfect for fans of Six of Crows!

The Girls Are Never Gone by Sarah Glenn Marsh

The Conjuring meets Sadie in this queer ghost story, when seventeen-year-old podcaster Dare finds herself in a life-or-death struggle against an evil spirit.

The Night When No One Had Sex by Kalena Miller

The Night When No One Had Sex finds a group of friends navigating the tenuous transition into adulthood and embracing the uncertainty of life after high school.

A trans teen walks the fine line between doing whatever it takes for his acting dream and staying true to himself in this moving, thought-provoking YA novel from the acclaimed author of Stay Gold.

The Jasmine Project by Meredith Ireland

Jenny Han meets The Bachelorette in this effervescent romantic comedy about a teen Korean American adoptee who unwittingly finds herself at the center of a competition for her heart, as orchestrated by her overbearing, loving family.

The Buried by Melissa Grey

A heart-pounding, claustrophobic new story from Melissa Grey, the author of RATED.

Where I Belong by Marcia Argueta Mickelson

An immigrant teen fights for her family, her future, and the place she calls home.

Your Life Has Been Delayed by Michelle I. Mason

Past and present collide in a captivating YA debut about a girl who takes off on a flight and lands . . . twenty-five years later.

In Erin Hahn’s Never Saw You Coming, sometimes it takes a leap of faith to find yourself.

It All Comes Back to You by Farah Naz Rishi

Two exes must revisit their past after their siblings start dating in this rom-com perfect for fans of Sandhya Menon and Morgan Matson.

The Corpse Queen by Heather Herrman

In this dark and twisty feminist historical mystery, a teenage girl starts a new life as a grave robber but quickly becomes entangled in a murderer’s plans.

The Bronzed Beasts by Roshani Chokshi

Returning to the dark and glamorous 19th century world of her New York Times instant bestseller, The Gilded Wolves, Roshani Chokshi dazzles us with the final riveting tale as full of mystery and danger as ever in The Bronzed Beasts.

The Haunting of Hill House meets Get Out in this chilling YA psychological thriller and modern take on the classic haunted house story from New York Times bestselling author Tiffany D. Jackson!

The Hollow Heart by Marie Rutkoski

The Lost Girls by Sonia Hartl

Defy the Night by Brigid Kemmerer

From New York Times bestselling author Brigid Kemmerer comes a blockbuster fantasy series perfect for fans of Holly Black and Victoria Aveyard, about a kingdom divided by corruption, the prince desperately holding it together, and the girl who will risk everything to bring it crashing down.

A Dark and Starless Forest by Sarah Hollowell

When her siblings start to go missing, a girl must confront the dark thing that lives in the forest–and the growing darkness in herself–in this debut YA contemporary fantasy for fans of Wilder Girls.

Not Here to Be Liked by Michelle Quach

Emergency Contact meets Moxie in this cheeky and searing novel that unpacks just how complicated new love can get…when you fall for your enemy.

Delicious gossip squares off with genuine heart in this inside look at a K-pop academy.

Pacific Rim meets The Handmaid’s Tale in this blend of Chinese history and mecha science fiction for YA readers.

The final installment in the hilarious, action-packed Babysitters Coven series that Refinery29 calls candy for 90’s girls and Gen Z’ers alike, featuring a coven of witchy babysitters sworn to protect the innocent and defend the world from an onslaught of evil–all before bedtime.

Into the Dying Light by Katy Rose Pool

The Age of Darkness trilogy is perfect for fans of Throne of Glass, Children of Blood and Bone, and An Ember in the Ashes.

All These Bodies by Kendare Blake

Sixteen bloodless bodies. Two teenagers. One impossible explanation. In this edge-of-your-seat mystery from #1 New York Times bestselling author Kendare Blake, the truth is as hard to believe as it is to find.

To Break a Covenant by Alison Ames

As If on Cue by Marisa Kanter

A pair of fierce foes are forced to work together to save the arts at their school in this swoony YA enemies-to-lovers romance that fans of Jenny Han and Morgan Matson are sure to adore.

From one of the brightest and most acclaimed new lights in YA fiction, a fantastic new novel about a bi Black boy finding first love . . . and facing the return of the mother who abandoned his preacher family when he was nine.

Once Upon a Broken Heart by Stephanie Garber

Once Upon a Broken Heart marks the launch of a new series about love, curses, and the lengths that people will go to for happily ever after from Stephanie Garber, the #1 New York Times bestselling author of Caraval.

The Last Graduate by Naomi Novik

For All Time by Shanna Miles

The Sun Is Also a Star meets Outlander in this vivid, utterly romantic debut novel about two teens who relive their tragic love story over and over until they uncover what they must do to change their fate.

Beasts of Prey by Ayana Gray

In this much-anticipated series opener, fate binds two Black teenagers together as they strike a dangerous alliance to hunt down the creature menacing their home–and uncover ancient deadly secrets.

A lush, gothic fantasy from debut author Lyndall Clipstone about monsters and magic, set on the banks of a cursed lake, perfect for fans of Naomi Novik and Brigid Kemmerer.

Before We Disappear by Shaun David Hutchinson

It’s a new star-crossed romance about the magic of first love from the acclaimed author of We Are the Ants and Brave Face, Shaun David Hutchinson.

In this stunning new fantasy novel from international bestselling author C. S. Pacat, heroes and villains of a long-forgotten war are reborn and begin to draw new battle lines. This epic fantasy with high-stakes romance will sit perfectly on shelves next to beloved fantasy novels like the Infernal Devices series, the Shadow and Bone trilogy, and the Red Queen series.

Which of these releases do you plan to pick up?