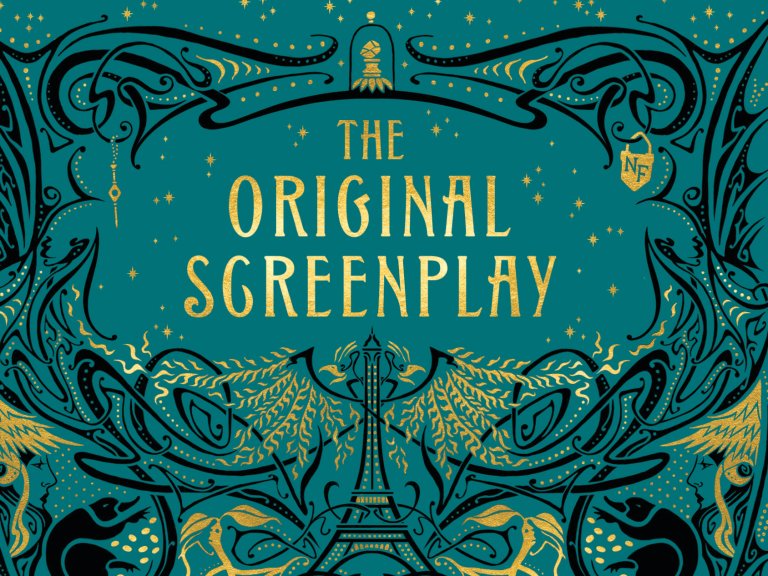 Cover for The Crimes of Grindelwald. How many hidden clues can you find on the cover? What do they mean? Find out!

For J.K. Rowling’s Wizarding World audience, sequels are nothing new (except for Cursed Child…that should stay as is.)

Pottermore announced this morning that the screenplay for Fantastic Beasts: The Crimes of Grindelwald, (the sequel to Fantastic Beasts and Where to Find Them) will be released on November 16, 2018.

Funnily enough, Fantastic Beasts: The Crimes of Grindelwald, the film, hits theaters on November 16, 2018. Coincidence? We think not. (Although it could be, who knows?)

Along with the release date of the screenplay in book format, both physical and digital, Pottermore also revealed the cover for the screenplay, which has fans talking about it and what clues might be hidden in the cover itself.

The cover itself was created by the graphic design team of the Fantastic Beasts films, MinaLima, who also provided the cover illustrations for the first Fantastic Beasts screenplay. Right off the bat we can see a few things on the cover that immediately tie into what we know about the sequel. In the cover, the eye is automatically drawn to the Eiffel Tower, which as we all know is in Paris, France where the second film is set. We also see some familiar icons such as the Deathly Hallows and Nifflers!

If you look closely you can also spot a couple of Bowtruckles along with a pair of black cats, dragons, an early version of the Dark Mark possibly, a few keys and a very mysterious lock with the initials NF on it.

English Version of the screenplay

French Version of the screenplay

According to Pottermore, the journey in The Crimes of Grindelwald takes the audience to three separate countries: Paris, France, New York and London, in that specific order.

Will you be purchasing the screenplay of Fantastic Beasts: The Crimes of Grindelwald before or after seeing the film? Let us know what you think! (And also let us know if you find some other symbols or hidden clues/easter eggs we might have missed on the cover!)