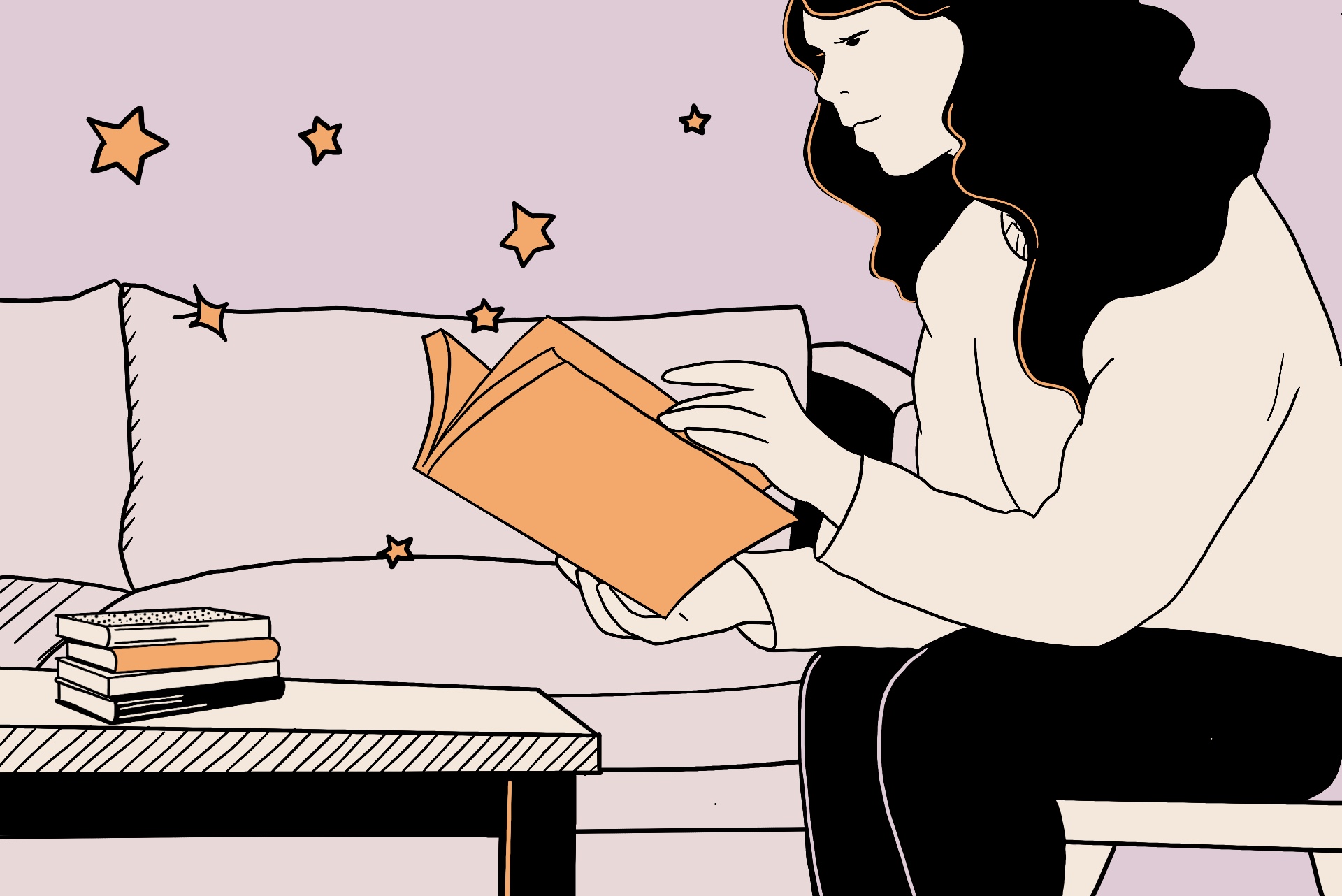 Young Adult books have been a massive part of my life — I wouldn’t be the same without them.

I sit here before you as 24-year-old YA reader. I have been an avid reader my whole life — a cliché which I’m told is not something to bring up in a job interview. Nevertheless, it’s true. I remember nights falling asleep with a book on my chest, warnings from my mother not to stay up too late reading, and teachers startling me back to reality once reading time was over.

Books have been a huge part of my life; they have defined my personality, helped me through difficult times and most of all, taught me some incredibly important lessons. And the novels I read the most? YA.

Epic Reads tells us that YA literature first truly began in the 1970s with authors such as Judy Blume and V. C. Andrews. As more and more authors started writing for the young adult audience, the 80s and 90s blossomed with books still well-known and adapted for TV today. Think L. J. Smith’s The Vampire Diaries, first published in 1991, and Stephen Chbosky’s The Perks of Being a Wallflower, originally published in 1999. But YA today, at least in my mind, is defined by books like The Hunger Games, Twilight, Percy Jackson and more. I’m not quite old enough to remember the hours-long queues for the next Harry Potter, but I am old enough to have felt the insanity of its successors — and the good old Tumblr days of fandom theories.

These books were at their biggest during the most fundamental part of my teenage years. Although originally published in 2008, I vividly remember the rise of The Hunger Games fandom in around 2011. Not with a whimper, but a bang did Suzanne Collins take over the school and before I knew it, copies of her trilogy were everywhere. Even people I had never seen touch a book before were raving about the series; copies were being passed around the classroom and arguments were heard over Team Peeta or Team Gale.

Two years previous, Twilight was the only thing anyone could talk about, with the book series having just come to its epic conclusion and the films rapidly approaching their’s. Fast forward to 2014, and suddenly John Green’s The Fault in Our Stars is the talk of the school, with at least two copies to be found in every classroom.

I think there is something to be said for this time period, and more importantly for this generation — my generation, and those surrounding my years — and how it brought YA to the forefront of people’s minds in a way that hadn’t been done before.

Yes, authors had been writing for young adults for decades, yet with the beginnings of social media as we know it today, and fandoms and franchises becoming money-makers, YA was taken seriously as a business perhaps for the first time.

Team Edward and Team Jacob jewellery was sold in Claire’s. Plaits were back in fashion. Kids drew Shadowhunter runes all over their arms in class. Tumblr edits of characters or scenes or quotes were my generation’s TikToks; master lists of fanfiction, artwork and more was how teens spent their evenings. It was an incredible wave to be part of and I can’t help but wonder where today’s YA would be without the now-clichéd crushes on Edward Cullen or faction-sorting quizzes.

The Young Adult novels of the 2000s and early 2010s told kids that they could fight for what they believed in. That they could be detectives and activists, lead rebel movements and find magic in the most unlikeliest of places.

We were shown dramatic, immortal romances. We were even shown that you could meet your soulmate whilst taking down an oppressive government. The authors of our teen years told us that we could be anything if we tried hard enough.

We created and we wrote and we made these franchises the size they are today. We bought and traded books, covered our walls in film posters and we decided we wanted to write books for the next generation of young adults that followed us through our chaotic years of adolescence. Now YA literature has become bigger than anyone could have anticipated. It covers a huge number of genres, from Crime to Manga to Fantasy and Contemporary. It has stories for everyone — and its diversity is only getting better.

Looking back to where YA began (for me, at least) it’s amazing to see how much the category has expanded and developed. I may have grown up with YA, but YA without a doubt grew up with me, too.

In the early 2010s we read books about vampires, fallen angels, and werewolves. We said “this is amazing, but can we have something new?” Then they gave us dystopian literature — The Fifth Wave, The Hunger Games, Divergent and more all came to the rescue. We responded with, “wow, that was incredible. Now how about real-world issues?” So along came contemporary. As we grew and our minds developed, the YA market seemed to grow with us. Authors experimented with new genres, but our reading habits made them into the hits that they are.

I can’t help but think young adults and YA books helped each other out. Books began teaching us about the world, and as we grew up and developed our own perceptions of society and our future — aided by the rise of social media and having access to much more worldwide information than ever before — we began to cry out for books that expressed how we felt.

I believe a lot of my sense of self and justice is down to the books I read as a teenager. When dystopian novels pointed out the eerily familiar ways governments controlled the lives of the public, I took that into my everyday life and began to question things that didn’t sit right. When contemporaries brought about real-world issues I had never encountered before, it challenged me to work on my own perceptions of the world, and to develop my outlook to become a better person. When romance novels pointed out low-bar relationships and the importance of friendships, I knew I would have high standards in my future.

I may not be a world-changing young adult, but Young Adult books were world-changing for me. And when I look around and see people like Malala Yousafzi and Greta Thunberg, and in my own country Marcus Rashford and Daze Aghaji, I see young people fulfilling the roles that books told me could be fulfilled.

Related: YA books and activism with Veronica Chambers of The New York Times (Podcast Interview)

Not only this, but there are so many young authors who I am sure have been influenced by YA over the years, who are writing YA today and expanding on the stories they read as teenagers. They are saying “yes” to the epic fantasies and heart-wrenching contemporaries and adding a “what if.” What if the protagonists are LGBTQ+? What if we give a voice to People of Colour? What if we show young boys it’s okay to show their emotions? What if we pay attention to generational trauma, and offer solace and comfort? What if, what if, what if.

I am sure Young Adult literature will continue to grow over the next few years, even decades. It has been changing rapidly for the past fifty years and it doesn’t show any signs of slowing down. It is, quite honestly, miraculous.

For me, YA books were a way of bonding with people I never expected to. But they were a way of finding myself too. Even though I was reading the same books as everyone else, I was reading an awful lot more as well. When I was a child I often felt out of place in my reading habits. At primary school (elementary to middle school) I always had a book in my hands. I read every single book I wanted from the school library. And I didn’t really have friends who read as much.

When the rise of YA came along, I didn’t feel quite so different. I looked around and realised lots of people around me had their noses buried in a book, just like me. I had characters like Bella Swan, who felt out of step with the world; I saw myself in them, and I knew I would be okay. If these authors could create characters I could relate to so whole-heartedly, then surely that meant other people felt the same way I did.

As I became more aware of social media and found websites like Bookstacked, it opened my eyes to a world (literally) of readers. Just because they weren’t in my immediate circle didn’t mean they weren’t out there. They were just a “follow” away and suddenly not only did I see people gushing about books, I found even more new books to read and authors to follow.

I found Bookstacked, and got to meet and work with likeminded people. I got to review ARCs and interview authors and discuss my most scathing or praising thoughts on a podcast. I wouldn’t have had any of that without YA.

Now I sit before you, less than a month away from being 25, and in complete awe at the journey myself and YA have been through. Although I don’t read as much YA as I did as a teenager, it is something I will always come back to and find comfort in — and if that doesn’t show you how integral YA is, I don’t know what will.