“He brought something to Snape that only he could, and there was always a part of me that saw the goodness of Snape behind everything else.” 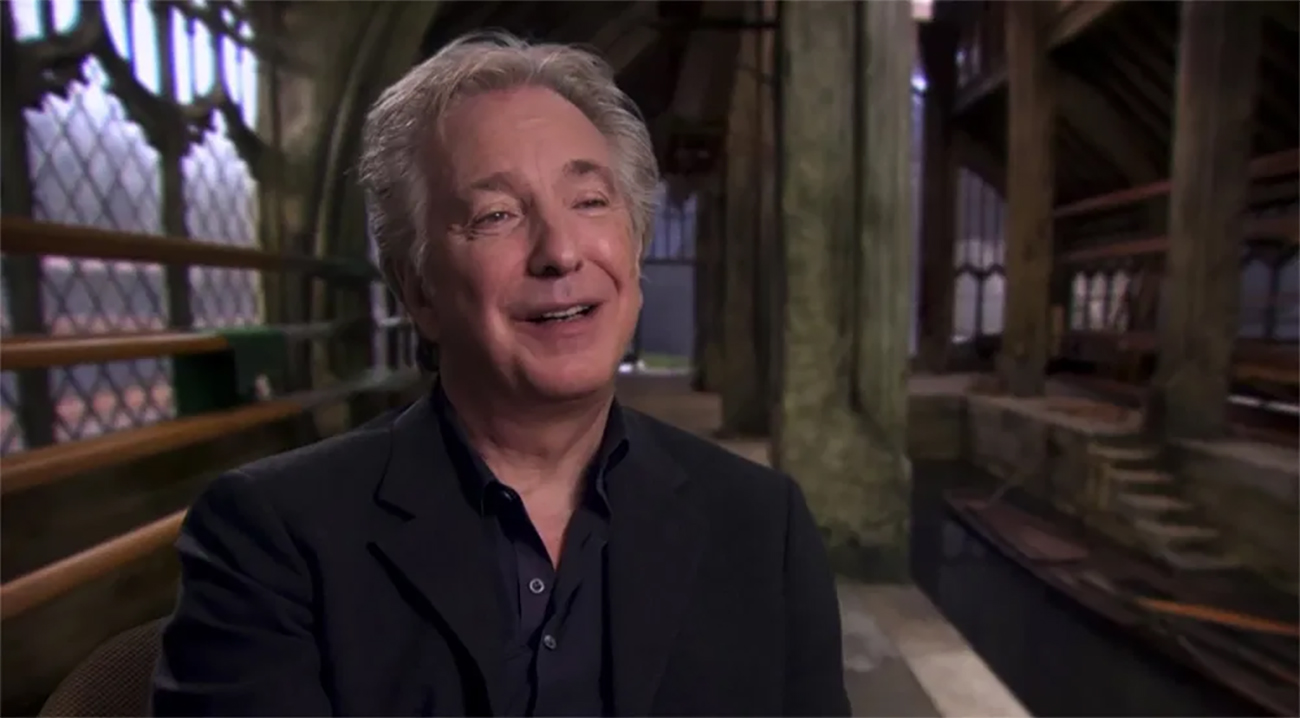 Alan Rickman on the set of 'Harry Potter and the Deathly Hallows, Part 2.' (Warner Bros.)

By • Bookstacked Team
January 14, 2021
Originally Published: January 18, 2016
Editor’s Note: It’s been five years since the passing of Alan Rickman(Jan. 14, 2016). We’re re-surfacing this article, first published in 2016, to remember Rickman’s great work and recognize the special place he holds in many readers’ hearts.

This past Thursday, the film industry lost one of the finest actors of our generation. To many he was Hans Gruber in Die Hard, to others, he was the Sheriff of Nottingham in Robin Hood: Prince of Thieves. To most, though, and especially all here at Bookstacked, Alan Rickman will forever be remembered as Severus Snape.

To show our gratitude toward Alan Rickman and his contribution to the Harry Potter series, a few of us Bookstacked writers have written a few words about this amazing actor.

“Without doubt, Alan Rickman will be missed”

When I was growing up and first watching the Harry Potter movies, Alan Rickman’s portrayal of Snape was one that both terrified and amazed me. I was entranced when he came on screen, and always eager to see the directions in which he took the character. As I grew older and began to see Alan outside of Harry Potter, and outside of acting, it became clear that he wasn’t a thing like the character he often portrayed. He was a good, kind-hearted man, with a smile that perfectly captured his happiness. Without doubt, Alan Rickman will be missed.

“He brought something to Snape that only he could”

One of my favorite characters in Harry Potter is Snape, and a lot of that is due to the portrayal of him by Alan Rickman. He brought something to Snape that only he could, and there was always a part of me that saw the goodness of Snape behind everything else. I know that is thanks to Alan Rickman and his brilliant acting. I think we will all be thankful for his wisdom and everything he brought to the Harry Potter fandom.

“There couldn’t have been anyone better”

Sometimes when you love a movie or book series so much, you spend countless hours looking at the people behind the camera and words that make it all possible. I certainly did that with Harry Potter. In a lot of ways, the actors behind the Potter series seemed so much more passionate about their work than other actors working on other popular franchises. Maybe it had something to do with being involved with the movies for a decade — I don’t know. Either way, the feeling I got from the Harry Potter actors and crew was that of gratitude and love. And I don’t just say this, but I truly mean it when I say that Alan Rickman stood out perhaps more than anyone else. J.K. Rowling trusted him with the story of Serverus Snape, many years before we ever fully understood it. He kept his promises and stayed true to the character through all ten years. He showed devotion and care toward a character that has gone on to mean so much to so many of us. There couldn’t have been anyone better.

Alan Rickman played the most memorable character in my favorite movies with perfection. Being a fan of Harry Potter, I was amazed at his portrayal of Snape throughout the films and didn’t know much about Rickman himself, besides his contribution to Harry Potter. But nonetheless, it hurt to find out that such an incredible actor had left the world on the 14th. I wish the best to him, his family, his friends, and thank him for the mark he’s left on our lives.