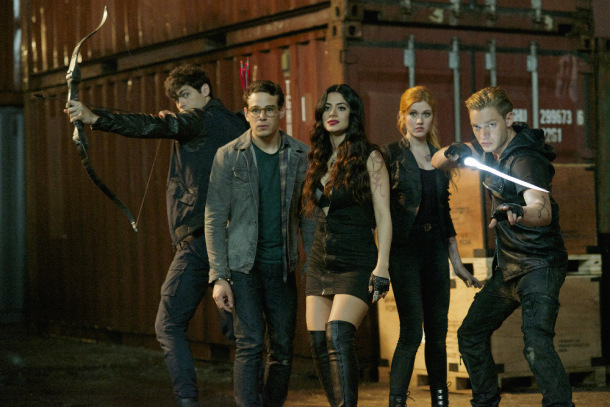 A recap of ‘Shadowhunters’ season 1 episode 5 “Moo Shu To Go”.

Clary Fray, having recently learnt she’s a Shadowhunter, is still on the search for her mother as everyone who wants the Mortal Cup hunts her. Clary and her friends must find it first before Valentine does and destroys them all.

‘Moo Shu To Go’ opens with an upset Clary telling Jace that she saw Valentine and that he spoke to her through her necklace, as Alec walks in. Clary’s necklace is a portal shard, if she thinks of her mother she can see her.

A tense Alec interrogates Clary to see if she saw anything that they could use to find Valentine, then takes the necklace and secures it, so no one will be tempted to use it. Jace and Clary disprove and want to use it to find Valentine. Alec doesn’t budge on his decision because if Clary can see Valentine maybe he can see them, or inside the Institute, as we transition into the opening credits.

Isabelle finds Clary who is upset and angry over Alec’s decision. They have a heart-to-heart as Isabelle tries to comfort her as Clary reminisces of her mother. Then Maryse, mother of Alec and Isabelle, enters the Institute. She has come because there’s an important matter that needs to be dealt with. She’s cold and severely firm, to the point of being harsh even cruel towards her own children, except towards Jace as her demeanor clearly changes with him.

It seems the Seelies (faeries) have stopped communicating with the Clave. She orders Jace to go with Isabelle to see Meliorn, to talk with him and get some answers. Alec must stay in the Institute, keep watch on Clary and keep her under control, after all the trouble she’s caused.
Luke continues looking for Clary as Clary struggles to keep it together after everything she’s been through.

Alec and Jace also have a heart-to-heart as Jace questions Alec’s weird behavior. They talk about what happened at Magnus’s when the memory demon took Alec’s memory of the one he loves most and it was Jace. Jace sees the memory in the form of a love of a brother. I don’t know whether Jace is really clueless to Alec’s feelings or he’s doing it on purpose to make it easier for Alec. Though the more I watch it the more clueless Jace seems to be. Jace also asks Alec to look after Clary while he’s gone, and Simon shows up at Hotel Dumort again and Raphael tells him to leave.

Clary and Alec have a chat as they practice their skills together. Then Alec gets a phone call and it turns out to be Magnus. Magnus asks Alec out and he says yes, but they hit a hiccup when Alec turns around and Clary is gone. Alec hangs up and goes running, looking for Clary. It was his responsibility to keep an eye on her.

We then flip to the Jade Wolf, a Chinese take away place, and the hang out of the werewolves. The pack leader decides and everyone else agrees that they should get the Mortal Cup to use for themselves, and the werewolves join in the hunt for Clary.

Alec finds Clary outside the Brooklyn Academy of Arts. She has decided to go find a box her mother use to hide from her that may contain something connected to Valentine, to Alec’s strong objection. Simon decides to come along and as Alec disagrees with the plan, Clary confronts him as to why he always seems to look miserable and on his feelings for Jace. She tells him to admit it, and it will make him feel better but he continues to deny his feelings.

Jace and Isabelle find out that the Seelies have stop contact because the scouts they sent for the Shadowhunters have died. Valentine continues with his experiments. Clary and Alec meet up with Simon to use a secret short cut to Clary’s place, so they can sneak in without drawing any unwanted attention. Simon shows some weird characteristics as he jumps over the fence with agility he’s never had before.

They get to Clary’s place as Simon again shows some more odd agility and skills, as Clary notice’s the runes all over the outside walls that she can now see, and strangely Simon can also see them too, as Alec points out “When did you get the sight?” (Again everyone is clueless to the fact that Simon has these new skills after having recently been kidnapped by vampires.)

Inside Clary’s they find the hidden box, thanks to Simon’s heightened inhuman hearing. They hear something outside. Alec tells Clary and Simon to remain in the room as he goes to check it out. Outside Alec looks around, when he sees something moving in the bushes, his arrows materialize coming into view as he reaches for one and loads his bow. (How awesome was that.) It’s clearly a wolf as it runs off and we see Clary and Simon being arrested and put into an unmarked car, as Alec tries to stop them but it’s to late.

Alec informs Jace and he’s not happy with him, as Isabelle points out that Clary snuck out the Institute yet he’s blaming his brother. They meet up and try to find Clary. Jace gets even angrier as he finds out Simon was there, as Isabelle seems worried for him. Alaric and the pack leader play good cop, bad cop (Alaric actually being a real cop) as they interrogate Clary to find the Mortal Cup.

Clary learns the men that took her are werewolves, and when she can’t give them the answers they want they threaten to rip Simon apart. Clary has no choice but to lie that she knows where the cup is. Jace and Alec try to track Clary with their Parabatai bond but it fails, apparently it doesn’t work if the person is over a body of water.

An angry Simon’s trapped in the other room, yet again being hung upside down. With his new extra strength he breaks free. They’ve locked him in a room with lockers so he just goes through them all, and of course he finds a phone and calls for help. He also finds a piece of paper with their exact location on it (how handy is that), and Isabelle tries to stop Jace and Alec fighting, as Jace takes it out on Alec.

Simon causes a distraction by pulling the fire alarm. The pack leader takes Clary and locks her in a shipping container. Luckily Clary has her witchlight and stele with her. Clary decides to draw a rune on the door of the container, which just catches alight. (I still don’t know what that was about).

Luke opens the container to a shocked and scared Clary, who tries to get away from him but he says he’s here to help. Luke with his fast speed disarms Clary and frees her from her handcuffs. (Clary still not putting two and two together that Luke is also a werewolf). Luke takes Clary putting her over his shoulder. Luke tries to take her some place safe when Jace and Alec intervene. They get Clary and knock out Luke as Isabelle saves Simon.

Clary and Simon share a reunion as the werewolves appear, surrounding them. They get ready to fight when out of nowhere another wolf attacks the pack leader, challenging him for command as the alpha. The other wolf wins, taking leadership as the other wolves honor their new leader… Luke, their new alpha, but he’s been badly hurt and collapses.

The episode comes to an end with Jace, Clary, and Simon taking Luke to Magnus because he’s the only one who can heal him. Isabelle and Alec are left behind, as we see the strain on Jace and Alec’s relationship continue to grow.

Let us know what you thought of this week’s episode?