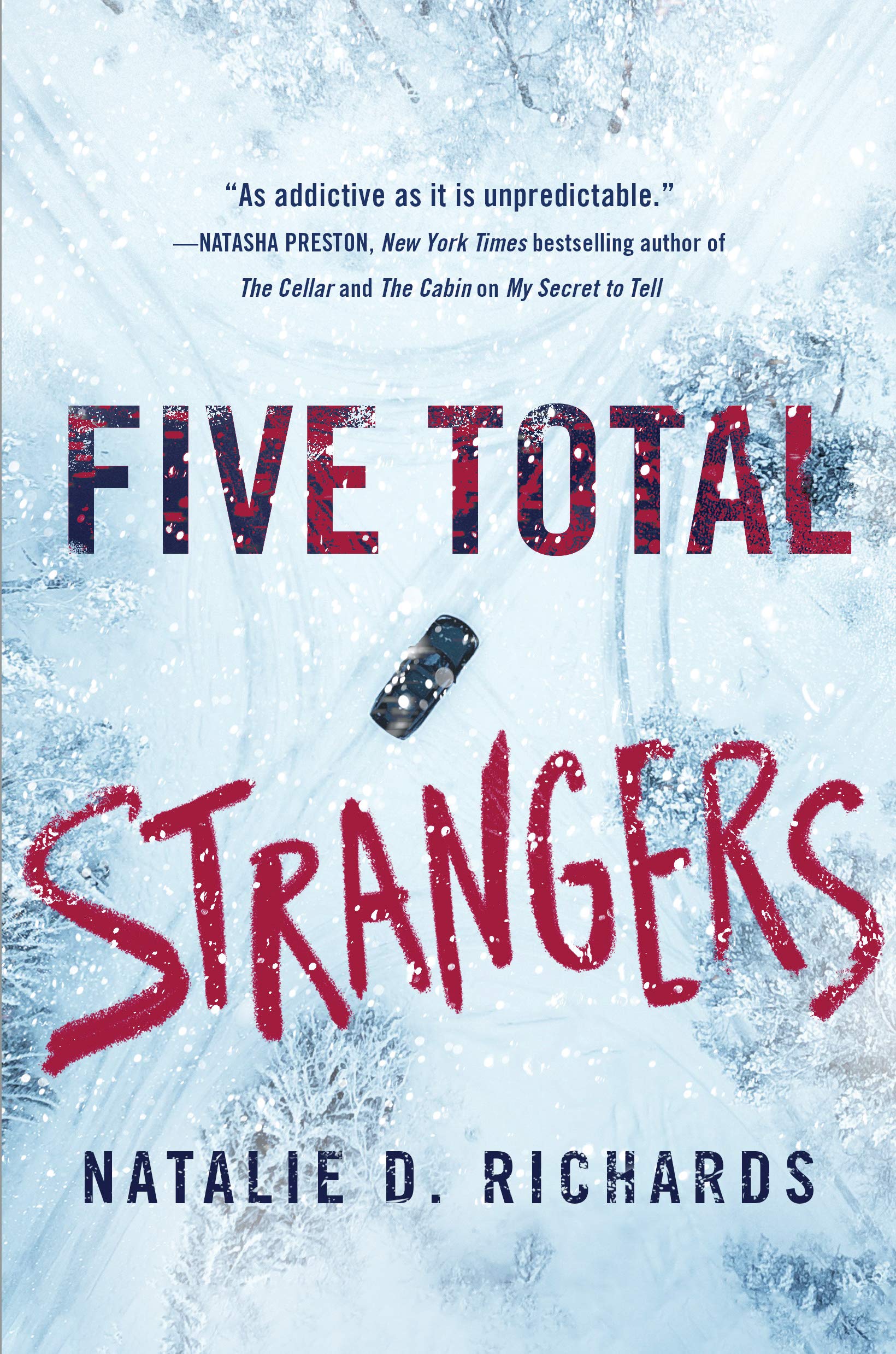 With a compelling main character and expertly-crafted plot, Five Total Strangers is a rollercoaster of emotions that’ll make any reader wary of strangers.

When Mira flies home to spend Christmas with her mother in Pittsburgh, a record-breaking blizzard results in a cancelled layover. Desperate to get to her grief-ridden mother in the wake of a family death, Mira hitches a ride with a group of friendly college kids who were on her initial flight.

As the drive progresses and weather conditions become more treacherous, Mira realizes that the four other passengers she’s stuck in the car with don’t actually know one another.

Soon, they’re not just dealing with heavy snowfall and ice-slick roads, but the fact that somebody will stop at nothing to ensure their trip ends in a deadly disaster.

“Stranger danger” is something that’s been ingrained in me ever since childhood, and I suspect I should thank it for keeping me alive this long. Still, there are times when you have no other choice than to rely on a stranger, whether it be for a few extra quarters at the cash register or a ride home.

While I’d love to believe that we live in a perfect world and every human I come across is as opposed to randomly murdering me as I am, we’ve all heard the real-life horror stories where someone trusted a stranger they shouldn’t have. It’s rare, but it’s a fear we all hold in the back of our minds, warning us of the potential dangers lurking behind every pair of eyes we come across on the street.

When Mira had no other option but to hitch a ride with four other strangers, I found myself fearing for her from the get-go, even when nothing nefarious had yet to occur. The genius of the plot lies in its setup: five strangers in one car, trapped by a blizzard. There’s no escaping.

As a result, Richards’ extraordinary writing takes center stage as the relationships — or what little of them — between characters slowly started to form tensions that are just waiting to explode. Every character had their own flaws, strengths and suspicions, but they’re each so nuanced it’s impossible to know who to distrust.

This uncertainty made every bone-chilling, jaw-dropping event that occurred all the more fearsome, as I felt just as confused as Mira herself. After all, can you ever truly believe what a stranger tells you?

As with any thriller, Richards ensured to throw in a fair share of twists and turns throughout the plot to keep me on my toes. Without giving away too much, one of my favorite additions was the unique and downright terrifying use of mysterious letters that were interjected between some chapters.

What made the novel truly shine was how easy it was to place myself in Mia’s shoes. Besides being a relatable and well-developed character, her reactions never made me throw up my hands in frustration like some other thrillers might. This is not to say I necessarily agree with every choice she made, but it does mean her actions were always in-tune with her character — not because the story needed something to happen. Like any human being, she questioned her intuition, fell victim to others’ lies and allowed fear to cloud her judgment.

While it also touched on grief and loss, this theme of constantly doubting your own instincts and wishes just to please others is one that resonated well, and I expect many readers will connect to it.

Ultimately, it all leads up to one twisty, pulse-pounding finale that pulled all the pieces together perfectly. When many thrillers struggle to have a worthwhile ending, Five Total Strangers is a welcome exception to the trend. While it’s not complete perfection and some readers may have to suspend their disbelief during some moments, Richards still wholeheartedly delivered on her promises — and then some. And, after finally knowing how everything fits in place, I’m looking forward to completing a second read.

If that’s not evidence of a book’s success, then I’m not sure what is.

Will keep you up at night

Five Total Strangers takes every fear readers might have about strangers and crafts them into one tight, suspenseful plot perfect for the spooky season.