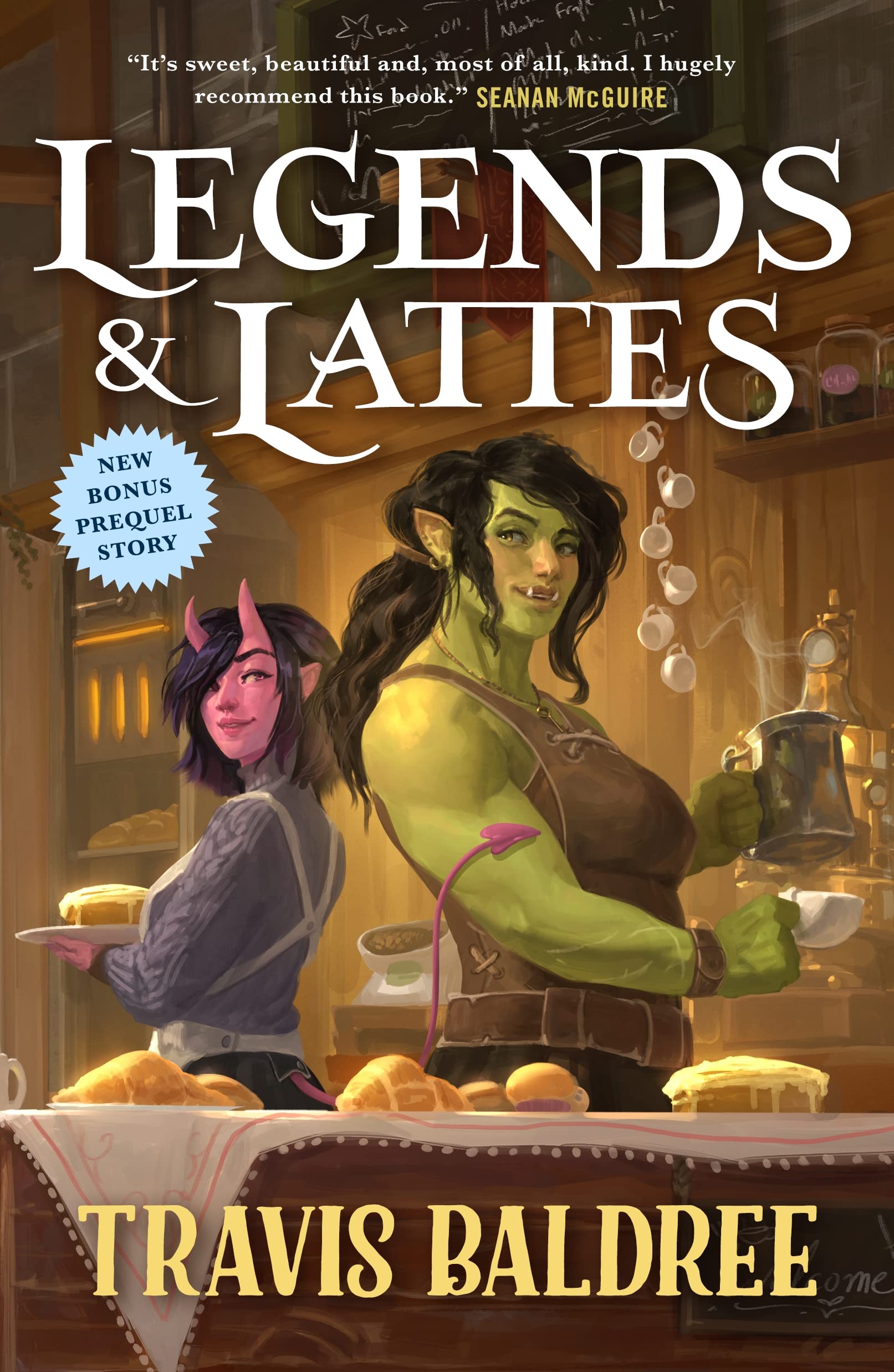 REVIEW: ‘Legends and Lattes’ by Travis Baldree was a cozy delight of a book

A slice-of-life book set in an epic fantasy world? Sign me up!

When Viv the Orc chooses a change of career, she faces unexpected obstacles and even more precious gains in Legends and Lattes by Travis Baldree.

Worn out after decades of packing steel and raising hell, Viv the orc barbarian cashes out of the warrior’s life with one final score. A forgotten legend, a fabled artifact, and an unreasonable amount of hope lead her to the streets of Thune, where she plans to open the first coffee shop the city has ever seen.

However, her dreams of a fresh start pulling shots instead of swinging swords are hardly a sure bet. Old frenemies and Thune’s shady underbelly may just upset her plans. To finally build something that will last, Viv will need some new partners and a different kind of resolve.

A hot cup of fantasy slice-of-life with a dollop of romantic froth.

When Viv sets out to introduce people to the wonder of coffee, a gnomish invention in this world, she doesn’t expect the difficulties it will carry, though she does rise to the occasion with the help of the people she meets along the way.

When we meet Viv, she’s full of hope and trepidation for her new adventure; she’s reasoned that she doesn’t want to die in battle like most of her kind do, but she struggles to cut ties with her old way of life, particularly her old way of thinking. This sets up a character arc where she must choose to turn away from violence and work within the confines of her new life with the help of her new family.

Legends and Lattes relies heavily on the found family trope with Cal, Tandree, and Thimble at its heart. Cal starts out as the gruff old carpenter hired for the job who comes to accept Viv’s eccentricities; Tandree is Viv’s barista who worms her way into Viv’s heart and pushes her to be better at every turn, while Thimble is their baker and the sweetest character around (a cinnamon roll too precious for this world).

When Viv’s old crew pay her a visit, old hurts come up and we get to see how she will resolve them, especially in the face of her new business.

Despite this being a slice-of-life book set in an epic fantasy world, there is a plot, and it revolves around the stress of everyday life. Building the shop, coming up with new menu items, and even establishing a routine are filled with tension and excitement. All the while Baldree sets up the main villain in the background: the local mob boss demanding a cut of the profits. Given Viv’s Orc background, I was pleasantly surprised at how the confrontation and resolution were handled, as they’re an important moment in Viv’s character growth.

As far as worldbuilding is concerned, Baldree gives readers a taste of how expansive his fantasy world is by referencing the origin of coffee with the gnomes, but he mainly keeps the focus on Thune and the shop itself. Through character interactions, side quests to collect the right ingredients, and trips to the market, Baldree creates a bustling city that can be overwhelming at times, but eventually comes to feel like home.

Despite the book’s short length, its characters and message pack a punch. It examines themes of uncertainty in life, loss, grief, and how to handle a new business when you’ve never been a business owner before. Baldree integrates these themes well into Viv’s every day life in a way that doesn’t overwhelm the reader.

Overall Legends and Lattes by Travis Baldree gave me everything I expected and more. The best way to describe this book is cozy, while delving into it points to more poignant themes and character development. I also think it’s the perfect length for a novel like this as anything longer might have problems with pacing and filling up the pages. I can’t recommend this enough and I look forward to seeing what else Baldree produces!