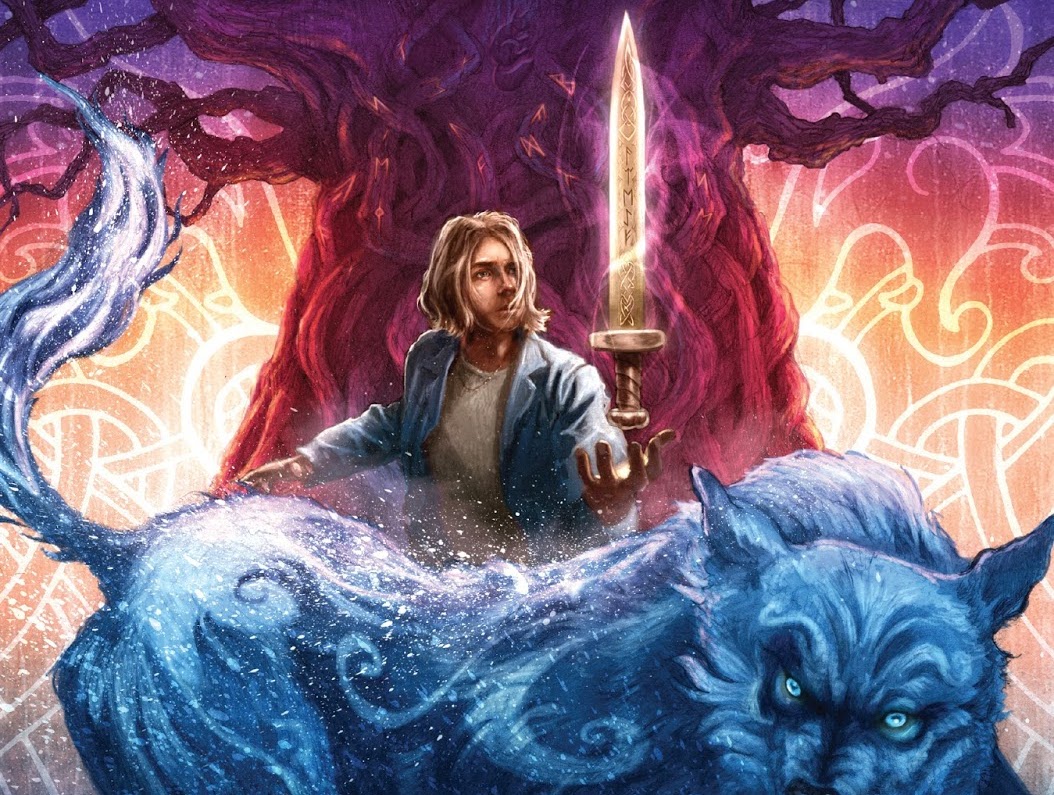 REVIEW: ‘The Sword Of Summer’ by Rick Riordan

With the perfect mix of pop culture, Taylor Swift and Norse Gods, ‘The Sword Of Summer’ delivers a reading experience that recreates the nostalgia of reading ‘Percy Jackson’ for the first time.

‘Magnus Chase and The Gods Of Asgard: The Sword Of Summer’ (try saying that ten times fast), is just as fantastic, if not even more fantastic, than all ten previous novels Mr. Rick Riordan has published. Seriously, somebody needs to knight this guy.

With the perfect mix of pop culture, Taylor Swift and Norse Gods, ‘The Sword Of Summer’ delivers a reading experience that recreates the nostalgia of reading ‘Percy Jackson’ for the first time.

Magnus Chase has always been a troubled kid. Since his mother’s mysterious death, he’s lived alone on the streets of Boston, surviving by his wits, keeping one step ahead of the police and the truant officers.

One day, he’s tracked down by a man he’s never met—a man his mother claimed was dangerous. The man tells him an impossible secret: Magnus is the son of a Norse god.

The Viking myths are true. The gods of Asgard are preparing for war. Trolls, giants and worse monsters are stirring for doomsday. To prevent Ragnarok, Magnus must search the Nine Worlds for a weapon that has been lost for thousands of years.

When an attack by fire giants forces him to choose between his own safety and the lives of hundreds of innocents, Magnus makes a fatal decision.

*Special thank you to PenguinTeen Australia for sending me an early copy of this book!*

First of all, what makes this book so interesting is that it is told from the perspective of a homeless 16 year-old living on the streets of Boston. This would have to be the first YA novel that I have encountered to be formatted as such; which is a very brave and commendable choice by the author.

As I said, this book is just as good if not better than every Rick Riordan book ever. It really does capture the essence and feel of ‘Percy Jackson’ and ‘The Heroes Of Olympus’ and that is what makes it such a nostalgic read for fans of Riordan’s work.

As per usual Rick Riordan, the characters that populate ‘The Sword Of Summer’ are super snarky, brave and hilarious. The depth that Riordan must go into to create such emotionally charged, lifelike and diverse characters is insane. Honestly. How does he do it? Our main character Magnus, although mirrors some character traits of Percy Jackson, is quite a diversely different character to the main characters of Riordan’s other novels.

Firstly, his name is just perfect (Magnus Chase. Man, I wish I had that name).

Secondly, his humour. I swear this book made me laugh more than any book ever has. Magnus is just such a snarky, cool and sarcastic character.

Finally, his character depth. He is a homeless, demigod, orphan 16 year-old that has escaped death on several occasions. Enough said.

The mix of Pop culture and Norse Mythology in this book is so perfectly crafted I think it beats that of Percy Jackson (and that’s saying something). The countless references to Falafels, Taylor Swift and Game Of Thrones (Three of my favourite things actually) just makes this story just so relatable and hilarious. Once again, Riordan manages to humanise all the Norse Gods we encounter and match them with a typical human stereotype; adding to the already perfect story he has created. Honestly, this man is a genius.

Written in the typical ‘Rick Riordan Style’, ‘The Sword Of Summer’ is quite simple in writing style and relies more on plot and depth in writing than complex writing techniques to convey ideas and draw interest. However, this book is definitely a step up from Percy Jackson. 500+ pages long, ‘The Sword Of Summer’ is  more like ‘The Heroes Of Olympus’ in writing style and depth than ‘Percy Jackson’. And for me, I guess that’s what makes this book so delightfully amazing.

Finally, (And most importantly) the plot of ‘The Sword Of Summer’ is… how can I put this lightly… TOTALLY AND WHOLLY AMAZING AND BEAUTIFUL AND WHOA! The perfect mix of epicness and enjoyment reflected in the plot of this book is mind-blowing. I challenge you to try put this book down halfway through a chapter. YOU CAN’T! THERE IS JUST TOO MUCH EPICNESS GOING DOWN FOR YOU TO LET GO. And that climax man… no spoilers but… whoa.

So overall, I think you get the point. ‘The Sword Of Summer’ is the perfect 11th addition to Rick Riordan’s ever growing library of #1 New York Times Bestsellers (Fingers-crossed). I can’t wait to read more of Magnus Chase. This series is going to as big if not bigger than ‘Percy Jackson’ and ‘The Heroes Of Olympus’. ‘The Sword Of Summer’ comes out October 6th so be sure to pick up a copy on release!