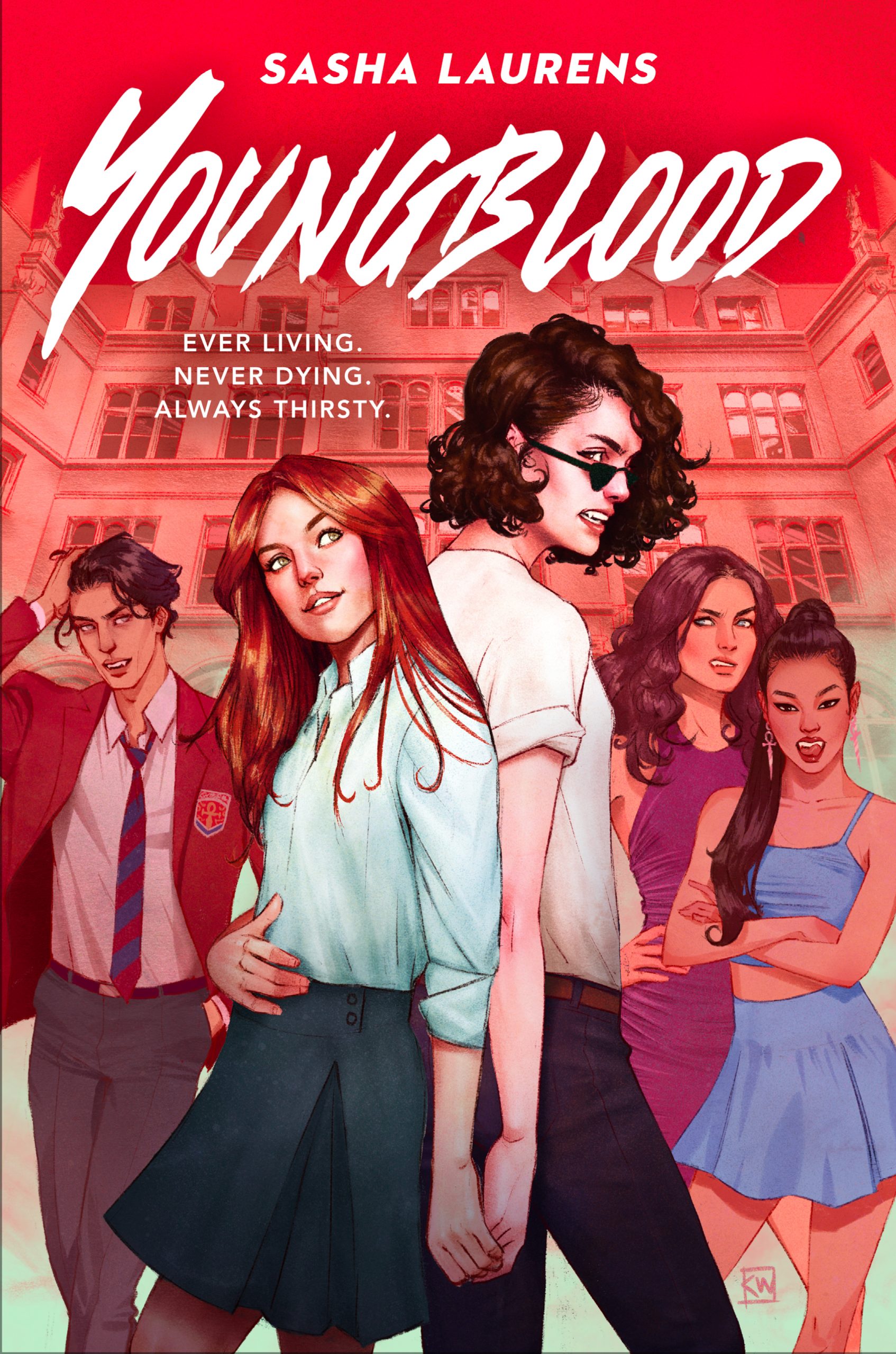 REVIEW: ‘Youngblood’ by Sasha Laurens is a queer vampire delight

Kat longs for acceptance but little does she know she won’t find it quite the way she expects.

When Kat and Taylor are thrown together for the first time in three years, they must put their past aside to face the threat Vampirdom represents in Youngblood by Sasha Laurens

Kat Finn and her mother can barely make ends meet living among humans. Like all vampires, they must drink Hema, an expensive synthetic blood substitute, to survive, as nearly all of humanity has been infected by a virus that’s fatal to vampires. Kat isn’t looking forward to an immortal life of barely scraping by, but when she learns she’s been accepted to the Harcote School, a prestigious prep school that’s secretly vampires-only, she knows her fortune is about to change.

Taylor Sanger has grown up in the wealthy vampire world, but she’s tired of its backward, conservative values — especially when it comes to sexuality, since she’s an out-and-proud lesbian. She only has to suffer through a two more years of Harcote before she’s free. But when she discovers her new roommate is Kat Finn, she’s horrified. Because she and Kat used to be best friends, a long time ago, and it didn’t end well.

When Taylor stumbles upon the dead body of a vampire, and Kat makes a shocking discovery in the school’s archives, the two realize that there are deep secrets at Harcote — secrets that link them to the most powerful figures in Vampirdom and to the synthetic blood they all rely on.

After growing up far from other vampires, getting into Harcote is a dream come true for Kat — or so she thinks. Despite having grown up in the human world, with human friends, Kat tries to fit in and adopt the persona of a superior creature, but she quickly comes to find out the sheer number of flaws Vampirdom has.

As a character she was fun, though a handful at times. She’s invested in activist causes, such as social justice and climate change, in contrast to much of Harcote’s student populace which emphasises how privileged the rest of them are. In fact, Laurens constantly brings this up in one way or another, which can come off as overbearing at times. Kat’s character arc becomes all about learning how to be her own person when the world tries to squash it out of her.

In contrast, Taylor was a delight. She embraces being the only openly queer person at Harcote and she doesn’t hesitate to shove it in people’s faces, even if that makes her a social outcast. She’s got an attitude teachers don’t like, a rebellious streak that threatens to land her in more trouble than she can imagine, and a soft spot for nerds of all kind that she lets few see. When Kat comes along, cracks appear in the careful persona she’s built until she’s forced to confront her feelings about various unpleasant situations in order to come out on the other side.

Where Kat’s relationships with other characters were stiff and awkward as she tried to figure out just what she wanted out of them, Taylor’s are a mass of tangled feelings that give those around her so much more depth. Her rivalry with Radke, her friendship with Kontos and her peculiar relationship with Evangeline reflect wonderfully on all characters involved.

Laurens extends this talent to her world, making it as intriguing as it is familiar. Following a devastating plague that made it impossible to feed on humans and reduced their numbers dramatically, vampires who had long been isolated from each other come to form Vampirdom in a concerted effort to create a society for themselves, especially for the Youngbloods, which were born as vampires. The book delves into why they’re only the first generation of vampires born into it and how that affects them, though Laurens does make a point to show that many of these differences are due to the environment they grew up in, rather than an innate trait.

The only pitfall in Youngblood has to do with its pacing. The first half of the book is concentrated on developing the characters with hints of a plot sprinkled here and there. Taylor only stumbles on the body after the halfway mark, which is far further than I expected. This makes rising actions and the climax feel crammed into too short a space, while the resolution was over in a flash.

Despite this, I very much enjoyed Youngblood by Sasha Laurens. It’s very vocal with its LGBTQ+ representation that goes beyond the two main characters. It’s got some interesting side characters that don’t fit stereotypes, and the parallels Laurens draws with real world history make readers reflect on certain poignant subjects.