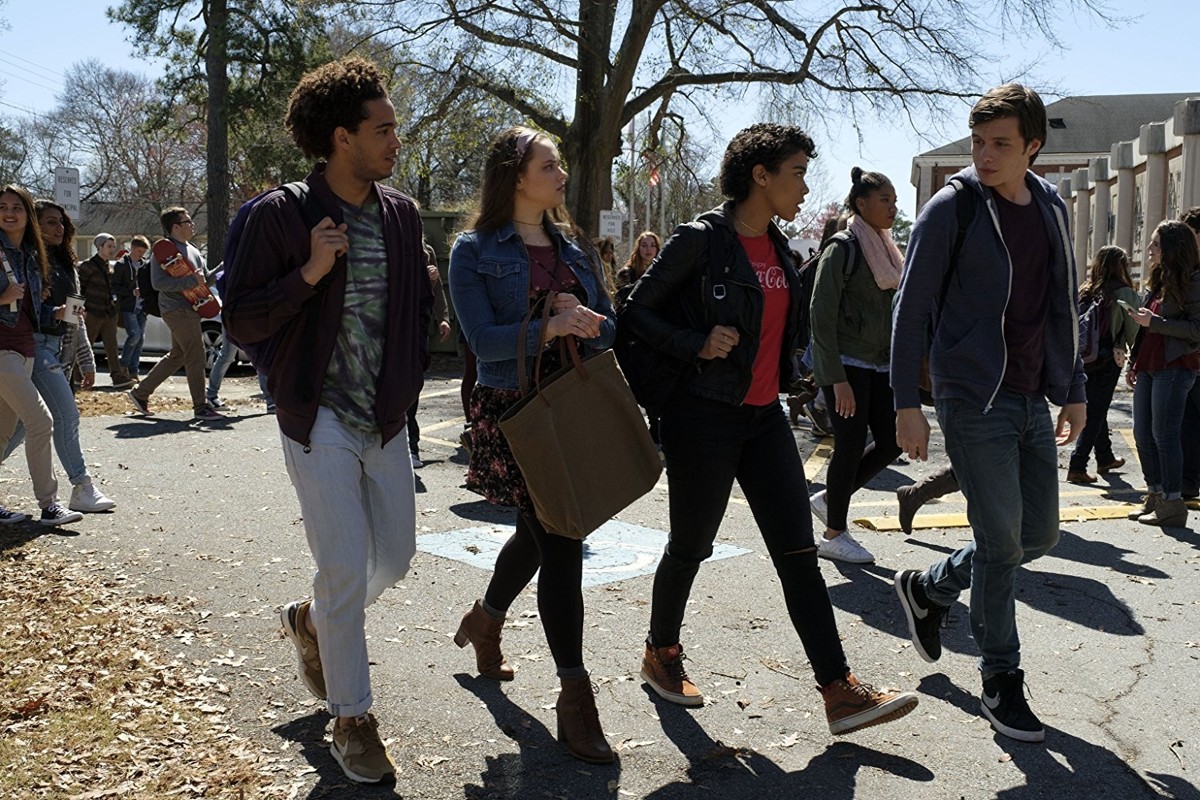 Almost all changes were welcome!

Every book to movie adaptation makes some changes to the original story. But in the case of Love, Simon vs the book, it’s safe to say that almost all changes were welcome. Films often have to portray the story in slightly different ways for certain aspects to make sense to a new audience, and most of these changes seem to cater for this. I think most readers of Becky Albertali’s Simon VS the Homo Sapiens Agenda will be happy with this adaption.

In the book: Simon is in his junior year of high school, aged 16.

In the book: Nora is a freshman at Creekwood high, Simon’s school.

In the movie: Nora is around 10 and she loves to bake. While I appreciated that this hobby was useful for some family fun shots, I kinda missed seeing Nora as a teenager with an awesome secret passion.

In the book: Simon’s email address, [email protected] is a reference to an Elliot Smith song, “Waltz #2”

In the movie: Simon’s email is changed to [email protected] I suppose the Elliot Smith reference wouldn’t really be utilised without specific plot points from the book that were also cut? But otherwise not sure why this needed to change.

4. Mr Worth and his borderline creepiness

In the book: We don’t really get any insight on Simon’s teachers, only a little about the drama teacher. Mr Worth doesn’t even exist.

In the movie: Mr Worth is that awkwardly creepy teacher, it adds a lot of humour that make up for the lack of cheeky Simon-Blue emails in the film.

In the book: Abby lives in a low socio-economic area and has to spend a lot of time on the bus to and from school. Sometimes she even stays at Simon’s house for the night because it’s too far to go home.

In the movie: Abby lives in a grand apartment building on the way to Creekwood High.

In the book: Simon mentions that he has dated girls in the past, and the big deal his parents made of it.

In the movie: We get a flashback scene to a school dance where Simon ran from his girlfriend when she tried to kiss him. He hides in the bathroom and texts his mom, “Come pick me up. Kids are drinking alcohol”

In the book: Simon’s older sister Alice has gone away to college but is still a big part of Simon’s family life. I really enjoyed reading the christmas scenes when the whole Spier family was together and Alice’s reaction to Simon coming out. It was nice to know that she had her own little coming out to do as well, just like Simon and Nora.

In the movie: Alice doesn’t exist.

In the book: Leah has a crush on Nick, not Simon, but Nick likes Abby instead.

In the movie: Leah has quite an intense crush on Simon, and Simon’s misinterpretations and meddlings in his friend’s love lives ends up way more complicated and unrequited than it ever did in the book.

In the book: Nick and Abby take Simon to a gay bar in the hopes of lifting his spirits,

In the movie: This hilarious scene does not make an appearance.

In the book: Simon is Fagin’s boy #11 in Creekwood High’s production of Oliver!

In the movie: Creekwood High’s musical is Cabaret”instead. Maybe they couldn’t get the rights to Oliver? I’ll admit though, I think watching that Cabaret scene 10 times over throughout the film was probably funnier than “Food glorious food” would have been.

In the book: About halfway through the book, Simon starts to suspect that Cal Price is Blue. After the big and awful reveal, Cal tells Simon that he’s bisexual and offers his support.

In the movie: Simon still has a crush on Cal but it’s never revealed whether Cal is LGBTQ+.

In the book: One of Nick’s soccer friends hosts a Halloween party. Simon goes as a dementor from Harry Potter, has one beer and doesn’t really like it. He’s not a huge fan of parties.

eIn the movie: Bram hosts the halloween party, a feat that shy and anxious Blue from the book would probably never do. Most of the character’s costumes are different from those in the book, and Simon proceeds to get rather drunk and walk in on Bram kissing a girl.

In the book: After Simon comes out at Christmas, he has a deep-and-meaningful with his sister Alice, but we don’t see him have a talk like this with his parents

In the movie: Simon’s mom and dad both get significant individual scenes where they apologise for making him feel like he had to hide himself from them and promise they’ll love him no matter what.

In the book: Some kids crash Oliver! rehearsal to make a scene and bully Simon, then perfect Taylor scares them off.

In the movie: A similar scene occurs in the cafeteria and when Simon attempts to stand up for himself he ends up un Mr Worth’s office with out-and-proud Ethan. Mr Worth believes the bullies’ signs telling everyone that Simon and Ethan are together.

In the book: Simon meets Blue on the Tilt-A-Whirl, a ride that makes Blue incredibly nauseated. Simon didn’t tell anyone who he was meeting so none of Simon’s friends knew of Simon and Blue finally getting together until the next school day.

In the movie: Simon tells Blue via the school Tumblr that he’ll be on the Ferris Wheel all night, so his friends (along with half the school) stand at the bottom of the wheel and watch, so when Blue arrives, his identity no longer a secret to the rest of the school.

In the book: Simon and his friends attend the Creekwood High talent show, and are surprised to find that Leah and Nora have formed an epic all-girl rock band. Afterwards, Simon skips Spier family dinner to spend the evening with Blue.

In the movie: The final scene comes full circle with the first. Simon, Nick, Abby and Leah perform their usual morning routine, but this time Blue is with them and they decide to skip school and spend some time together before they all graduate.

Are there any changes we missed? Let us know!