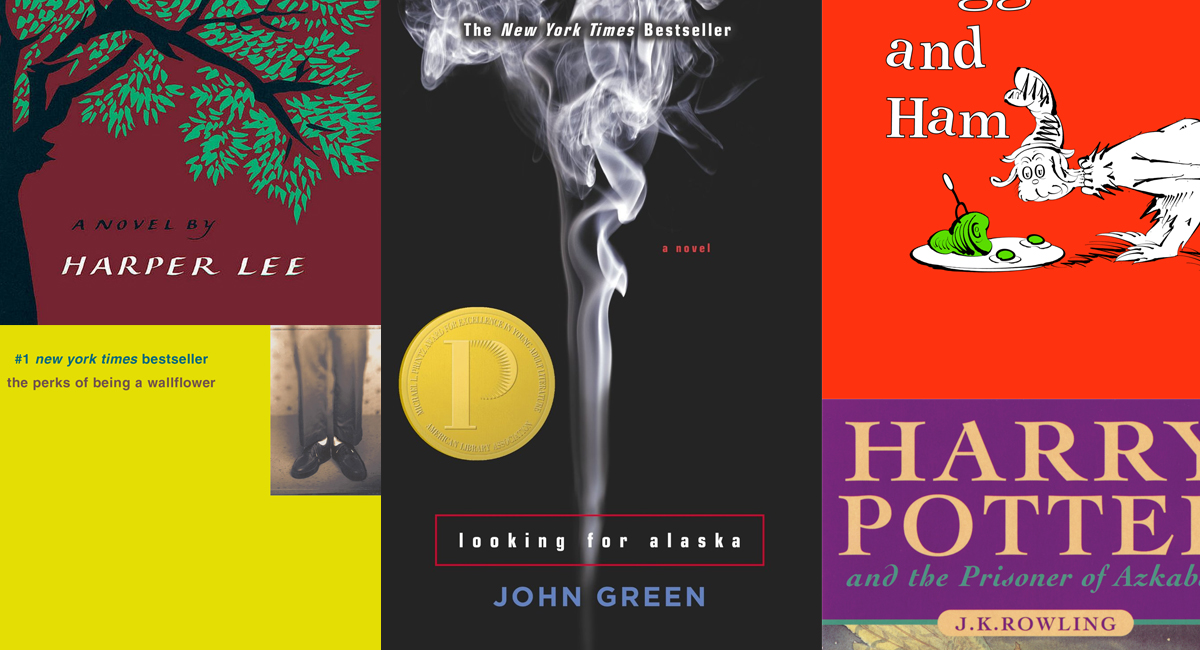 Banned Books week always has us going back to some of our favorites!

It’s Banned Books week again, which means we’re left thinking about some of our favorite books to read! (Funny how that works out, isn’t it?)

From awkward stories about teenagers growing up to our favorite boy wizard, a number of cherished books have been challenged by school boards and parents for one reason or another. Still, it’s many of these books that we find ourselves going back to — especially this week!

So in honor of Banned Books Week, we’ve put together a list of our favorite banned books we’ve come across over the years!

The Perks of Being a Wallflower by Stephen Chbosky

Why it was banned: This book is actually on the American Library Association’s list of the most frequently challenged books. The biggest complaint by parents is the references of sexuality, offensive language, and how it glorifies drug/alcohol use.

Why I love it: The Perks of Being a Wallflower was one of the first books that inspired my passion for reading. It deals with tough issues that need to be discussed more, especially between teenagers who are struggling with many issues this book brings up. It’s one of my favorite coming-of-age stories.

Looking for Alaska by John Green

Why it was banned: The ALA named this book the #1 most challenged novel of 2015 for its explicit content and offensive language, but it still remains one of my favorite young adult books. Looking for Alaska follows the story of a group of outgoing teenagers at a boarding school.

Why I love it: I think what I enjoy most about novels with a boarding school setting is the freedom the characters get to explore themselves as individuals without their parents. It’s a well written, exciting coming-of-age book that I hold close to my heart.

Why it was banned: This series of books is named the #1 most challenged books for the 2000-2009 decade, according to the ALA. It’s usually on the list because people think the books have satanism because of the witchcraft and also the violence in the books.

Why I love it: This series of books is the reason I got into reading and shows that even though there can be evil in the world, good will always triumph.

Why it was banned: This childhood classic was banned for its Marxist themes in the People’s Republic of China. The ban began in 1965 and was lifted after the author’s death in 1991. The story encourages readers to try new things and to stand up to authority, said New York Public Library.

Why I love it: Growing up, this book was one I enjoyed reading because of it’s rhyme and rhythm. Other Dr. Seuss titles that have been banned are Yertle the Turtle and The Lorax.

Why it was banned: Ray Bradbury’s dystopia has been challenged on numerous occasions since its publication in 1953. In most cases the book has been banned for its use of strong language. Of course, the ironic thing is that Fahrenheit 451 deals heavily with censorship, telling the story of a fireman whose job is to burn books.

Why I love it: This was the first dystopian novel I ever read. As someone who loves books, it captured my mind in a way few stories have. The idea of a world where firemen start fires rather than putting them out, where people don’t own books and where society chooses mindless entertainment on a screen rather than insightful words on a page is one that’s played out in the world’s history all too often. In many ways, I feel this book is more relevant than ever.

To Kill a Mockingbird by Harper Lee

This American classic is often regarded as one of the most challenged books of all time, and often for a variety of reasons. Published in 1960, it is frequently included in lists of the greatest novels of all time due to its unique look into themes of inequality and racism in 1930’s America. The novel promotes the idea of treating everyone fairly, regardless of their skin colour, and to not make assumptions about people unless you know who they truly are on the inside. However, since the 1970’s this book has been challenged and banned for various reasons, ranging from “vulgar language” to “violence” to “racial content”. It’s always bewildering to me that a book centred on challenging racism is often banned itself for the racist comments of the characters being challenged within the text.

WHAT ARE SOME OF YOUR FAVORITE BANNED BOOKS? LET US KNOW IN THE COMMENTS!