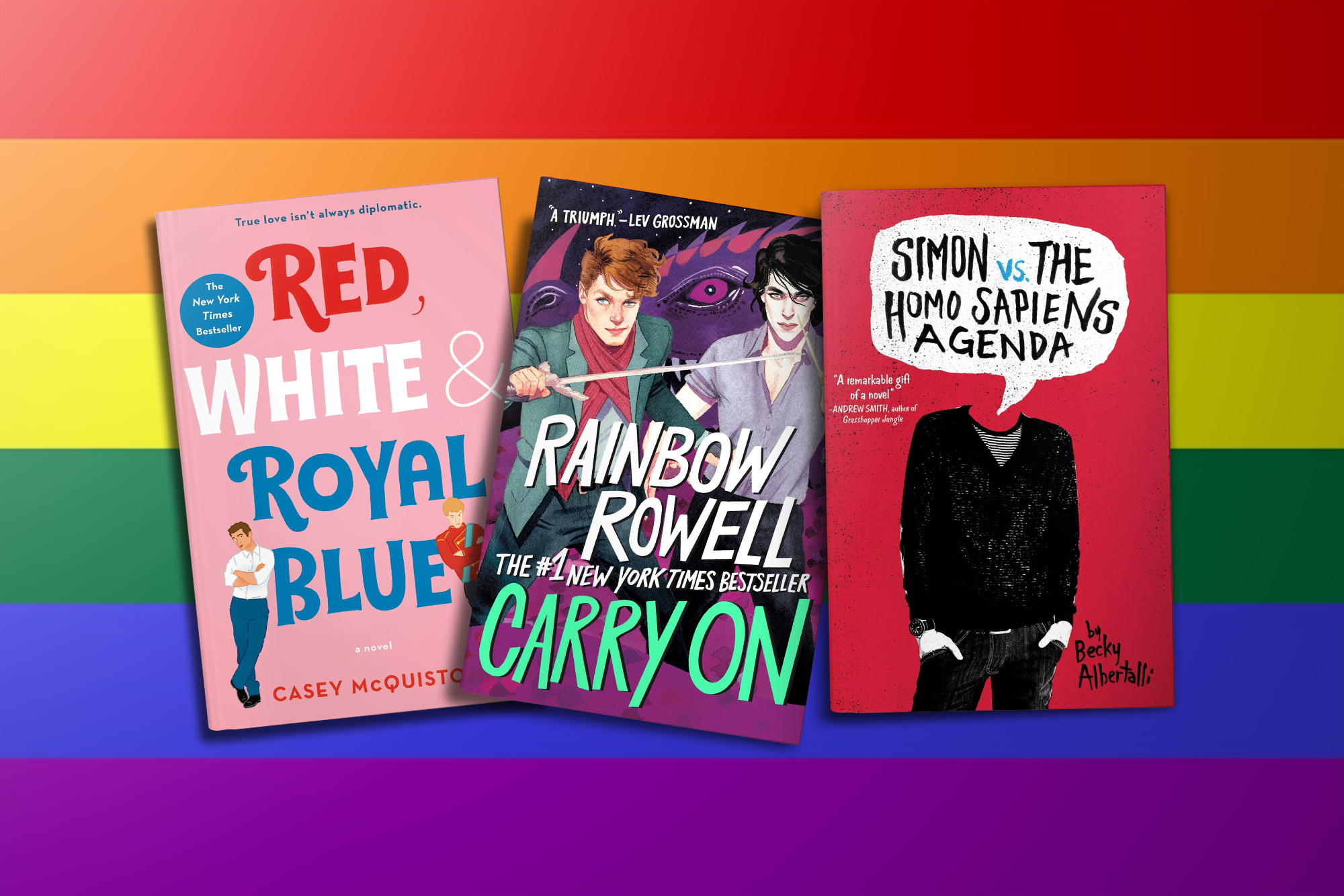 Here are some of the best when it comes to LGBTQ+ representation.

YA books celebrate the best in diversity — and that includes LGBTQ representation.

LGBTQ+ focused stories aren’t new to young adult literature, but there’s no doubt that there’s been a massive surge in recent years. Whether it’s the magical tale of a wizard and a vampire, or a contemporary novel about first loves, we’ve compiled a list of some of our favorite YA books that celebrate LGBTQ pride. You’ll also find thoughts on some of these books from Bookstacked writers.

Girls of Paper and Fire by Natasha Ngan

In this richly developed fantasy, Lei is a member of the Paper caste, the lowest and most persecuted class of people in Ikhara. She lives in a remote village with her father, where the decade-old trauma of watching her mother snatched by royal guards for an unknown fate still haunts her. Now, the guards are back and this time it’s Lei they’re after — the girl with the golden eyes whose rumored beauty has piqued the king’s interest.

Over weeks of training in the opulent but oppressive palace, Lei and eight other girls learns the skills and charm that befit a king’s consort. There, she does the unthinkable — she falls in love. Her forbidden romance becomes enmeshed with an explosive plot that threatens her world’s entire way of life. Lei, still the wide-eyed country girl at heart, must decide how far she’s willing to go for justice and revenge.

Kristy Mauna: Inside this lush, dark fantasy the sweet f/f romance is a beacon of light. It’s refreshing to see such a relationship represented in a fantasy series!

Sixteen-year-old friends Red, Leo, Rose, and Naomi are misfits; still figuring out who they are and who they want to be. Life isn’t perfect, but music brings them together, and they are excited about what the future holds for their band, Mirror, Mirror. That is until Naomi vanishes before being pulled unconscious out of the river.

She’s left fighting for her life in a coma. The police claim it was a failed suicide attempt, but her friends aren’t convinced. Will Naomi ever wake up? What – or perhaps who – led her to that hospital bed? And how did Red, the self-styled protector of the group, fail to spot the warning signs?

While Rose turns to wild partying and Leo is shrouded by black moods, Red sets out to uncover the truth. It’s a journey that will cause Red’s world to crack, exposing the group’s darkest secrets. Nothing will ever be the same again, because once a mirror is shattered, it can’t be fixed.

Britani Overman: What I think is most important about this book is that you don’t know the main character is gay until more than halfway through the book. Because the character’s nickname is Red, you truly don’t know if you’re reading from a male or female perspective until that revelation. I think it beautifully shows that people are people, not a label.

Fresh out of high school, Babe Vogel should be thrilled to have the whole summer at her fingertips. She loves living in her lighthouse home in the sleepy Maine beach town of Oar’s Rest and being a barista at the Busy Bean, but she’s totally freaking out about how her life will change when her two best friends go to college in the fall. And when a reckless kiss causes all three of them to break up, she may lose them a lot sooner. On top of that, her ex-girlfriend is back in town, bringing with her a slew of memories, both good and bad.

And then there’s Levi Keller, the cute artist who’s spending all his free time at the coffee shop where she works. Levi’s from out of town, and even though Babe knows better than to fall for a tourist who will leave when summer ends, she can’t stop herself from wanting to know him. Can Babe keep her distance, or will she break the one rule she’s always had – to never fall for a summer boy?

Kristy Mauna: This LGBTQ YA book centers around a bi character named Babe. Babe’s confidence in her identity is sure to resonate with plenty of readers and make them smile!

I Have Lost My Way by Gayle Forman

A powerful display of empathy and friendship from the #1 New York Times Bestselling author of If I Stay. Around the time that Freya loses her voice while recording her debut album, Harun is making plans to run away from home to find the boy that he loves, and Nathaniel is arriving in New York City after a family tragedy leaves him isolated on the outskirts of Washington state. After the three of them collide in Central Park, they slowly reveal the parts of their past that they haven’t been able to confront, and together, they find their way back to who they’re supposed to be. Told over the course of a single day from three different perspectives, Gayle Forman’s newest novel about the power of friendship and being true to who you are is filled with the elegant prose that her fans have come to know and love.

Britani Overman: This book centers around other people’s expectations of us – whether it be social media, family or religion. The character Harun must decide between following his true love – a man – or following his family and religion who he believes would disown him for this “lifestyle”. This book celebrates pride as his new friends give him the courage to come out to his family and when his family is still loving and accepting of him.

First Son Alex Claremont-Diaz is the closest thing to a prince this side of the Atlantic. With his intrepid sister and the Veep’s genius granddaughter, they’re the White House Trio, a beautiful millennial marketing strategy for his mother, President Ellen Claremont. International socialite duties do have downsides—namely, when photos of a confrontation with his longtime nemesis Prince Henry at a royal wedding leak to the tabloids and threaten American/British relations.

The plan for damage control: staging a fake friendship between the First Son and the Prince. Alex is busy enough handling his mother’s bloodthirsty opponents and his own political ambitions without an uptight royal slowing him down. But beneath Henry’s Prince Charming veneer, there’s a soft-hearted eccentric with a dry sense of humor and more than one ghost haunting him.

As President Claremont kicks off her reelection bid, Alex finds himself hurtling into a secret relationship with Henry that could derail the campaign and upend two nations. And Henry throws everything into question for Alex, an impulsive, charming guy who thought he knew everything: What is worth the sacrifice? How do you do all the good you can do? And, most importantly, how will history remember you?

Brigitte Herron: This YA book offers a world full of LGBTQ+ representation that goes beyond the relationship developing between Alex and Henry. Red White & Royal Blue offers a wide variety of sexualities that are seamlessly integrated into the story, while Alex’s own journey was heartwarming, hilarious and relatable. (Read the full review)

Carry On by Rainbow Rowell

Simon Snow is the worst Chosen One who’s ever been chosen.

That’s what his roommate, Baz, says. And Baz might be evil and a vampire and a complete git, but he’s probably right.

Half the time, Simon can’t even make his wand work, and the other half, he starts something on fire. His mentor’s avoiding him, his girlfriend broke up with him, and there’s a magic-eating monster running around, wearing Simon’s face. Baz would be having a field day with all this, if he were here — it’s their last year at the Watford School of Magicks, and Simon’s infuriating nemesis didn’t even bother to show up.

Simon vs. the Homo Sapiens Agenda by Becky Albertalli

Sixteen-year-old and not-so-openly gay Simon Spier prefers to save his drama for the school musical. But when an email falls into the wrong hands, his secret is at risk of being thrust into the spotlight. Now Simon is actually being blackmailed: if he doesn’t play wingman for class clown Martin, his sexual identity will become everyone’s business. Worse, the privacy of Blue, the pen name of the boy he’s been emailing, will be compromised.

With some messy dynamics emerging in his once tight-knit group of friends, and his email correspondence with Blue growing more flirtatious every day, Simon’s junior year has suddenly gotten all kinds of complicated. Now, change-averse Simon has to find a way to step out of his comfort zone before he’s pushed out—without alienating his friends, compromising himself, or fumbling a shot at happiness with the most confusing, adorable guy he’s never met.

What are some of your favorite LGBTQ YA books?