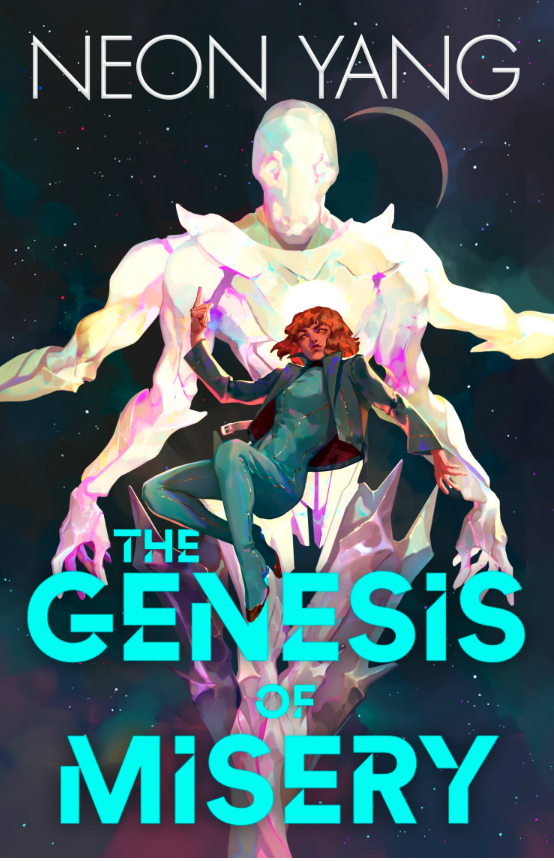 'The Genesis of Misery' by Neon Yang (Tor Books)

REVIEW: ‘The Genesis of Misery’ by Neon Yang was one surprise after the other

I expected Joan of Arc in Space and got a tale of hurt, loss, love and hope wrapped up in a fascination world.

Misery Nomaki’s journey to becoming the Empire’s Ninth Messiah is fraught with danger in Neon Yang’s The Genesis of Misery.

This is the story of Misery Nomaki (she/they) — a nobody from a nowhere mining planet who possesses the rare stone-working powers of a saint. Unfortunately, these saint-like abilities also manifest in those succumbing to voidmadness, like that which killed Misery’s mother. Knowing they aren’t a saint but praying they aren’t voidmad, Misery keeps quiet about their power for years, while dreaming and scheming up ways off their Forge-forsaken planet.

But when the voice of an angel, or a very convincing delusion, leads Misery to the center of the Empire, they find themself trapped between two powerful and dangerous factions, each hoping to use Misery to win a terrible war.

Still waiting to be convinced of their own divinity and secretly training with a crew of outlaws and outcasts, Misery grows close to a rebel royal, Lady Alodia Lightning, who may know something of saints and prophecy herself. The voice that guides Misery grows bolder by the day, and it seems the madness is catching…

The Genesis of Misery takes place in a world where religion and technology are at war with each other, and Misery finds themselves right in the middle of it as they go from believing they are sick to believing they can end the war for the side of the Faithful. Their journey is a very interesting character study in embracing the belief of a divine destiny which Yang makes clear as Misery’s personality and the way they think evolves with each new revelation. At the end of the book they were far from where they began in one of the most marking character arcs I’ve come across recently.

The rest of the cast of characters were equally interesting. Being an excellent reader of people, Misery gives us more insight into them and thus their journey than we would have otherwise. The most important sides characters are Ruin and Lightning, who become Misery’s companions in this journey. While first being perceived as a delusion, Ruin is central to moving along the plot by guiding Misery, whereas Lightning is there because she believes that Misery can fix the decadence festering at the heart of the Empire. Even more minor characters have moments of character development, though they all center around Misery.

The world of The Genesis of Misery is as fascinating as it is complicated. Yang creates an expansive civilisation with a religion that dominates every part of it, and one that is at war with a group of Heretics that believes everything comes down to technology. Though parts of it confused me, I was immediately sucked in and by the end had a decent grasp on how everything was set up, especially as later revelations give a much more complete picture than the black and white narrative the Church tries to present.

Neon Yang’s writing is another feature that stood out in the book. Having a Joan of Arc reimagining set in a space opera is fascinating enough, but then they go on to do interesting things with gender and sexual identity with just about every character. Though a religious society, the Empire doesn’t supress the expression of gender with characters being introduced by their name and pronouns, and the use of several neo-pronouns. It’s especially interesting when it comes to Misery who initially goes by she/they pronouns and later embraces a third type in certain situations. Yang paints a world of acceptance that explains certain subtleties while leaving others up to the reader to understand, and it’s something I’ve rarely come across.

Another thing that stood out to me was how Yang used their sex scenes. While most fade to black, the ones that do appear on page are focused primarily on the character development they bring on, with the act being a secondary thought. While there aren’t many, they are poignant and left an impression.

The writing itself was also different to what I’m used to as it also followed Misery’s character arc. What started out as fast paced, almost gritty sentences that reflected Misery’s state of mind started taking on a more sermonising tone as the religious element became more and more prominent. It was easy enough to follow, getting lyrical at times though without being overly tiresome.

As for the plot, The Genesis of Misery by Neon Yang embraces the space opera genre and marries it with the history surrounding Joan of Arc, giving a fast paced yet wholly satisfying novel. The first scene is an escape scene and that sets the tone for the rest of the novel as winning the war against the Heretics becomes, in Misery’s view, something that can finally be achieved and must be done fast.

Overall I enjoyed The Genesis of Misery by Neon Yang, first for its creative character studies and interesting writing conventions and second for the plot. Yang gives us a world where the diversity of gender and sexuality are simply a part of life rather than being a contentious point, while the backdrop of a centuries’ old war sucks the reader in from the beginning. I look forward to seeing where this series goes, especially in light of the last quarter of the novel.

Editor’s note: This novel contains many adult themes, including harsh language, alcohol and drug use, sex scenes (though they are far from gratuitous and barely explicit), and some scenes of graphic violence associated with war and war prisoners.