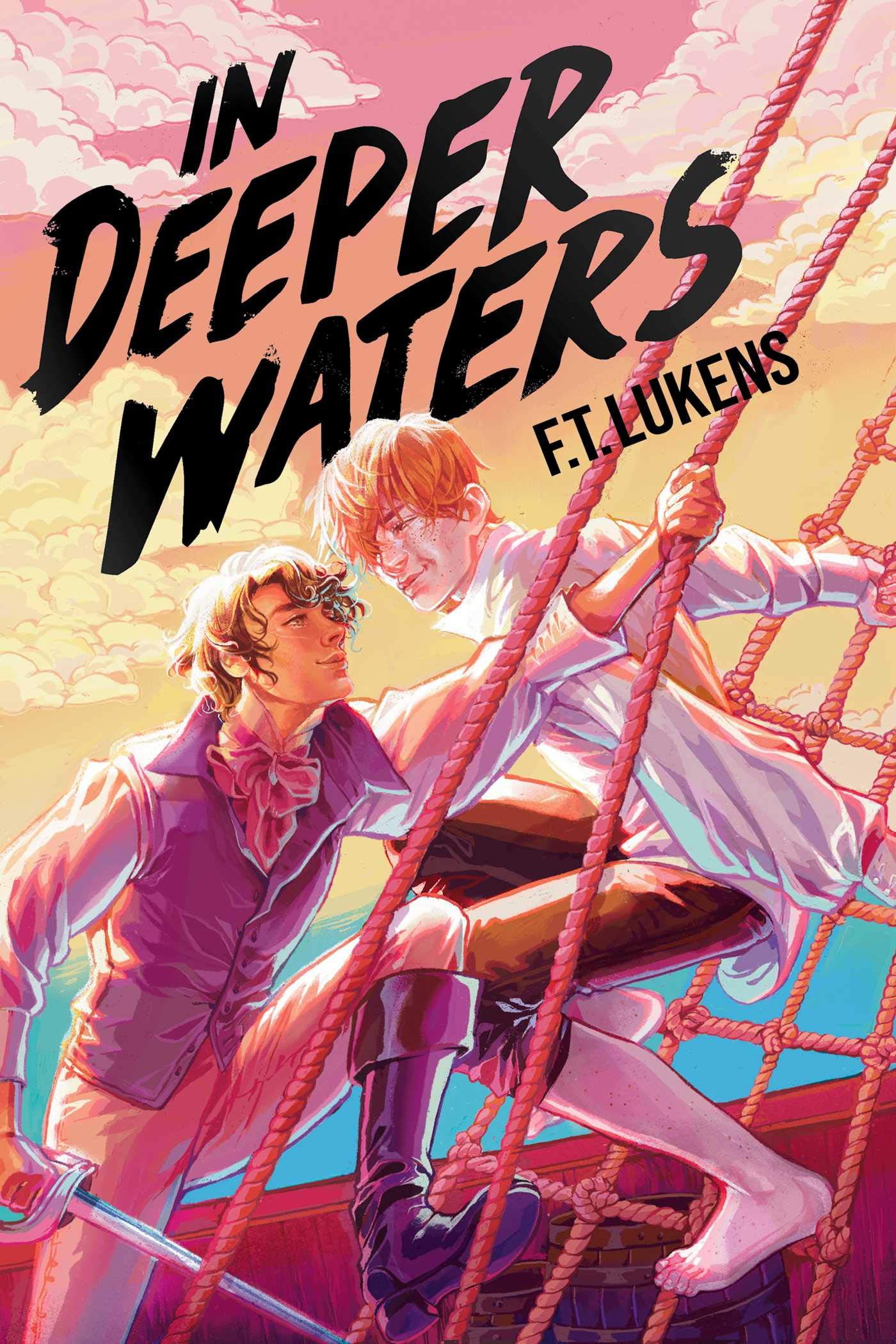 REVIEW: ‘In Deeper Waters’ by F.T. Lukens is a refreshing queer fantasy

Swoony and light-hearted, this standalone is a fresh start to the summer.

Sometimes, you just need a lighthearted, fast-paced read that feels like a breath of fresh air. In Deeper Waters hits all of those points.

Prince Tal has long awaited his coming-of-age tour. After spending most of his life cloistered behind palace walls as he learns to keep his forbidden magic secret, he can finally see his family’s kingdom for the first time. His first taste of adventure comes just two days into the journey, when their crew discovers a mysterious prisoner on a burning derelict vessel.

Tasked with watching over the prisoner, Tal is surprised to feel an intense connection with the roguish Athlen. So when Athlen leaps overboard and disappears, Tal feels responsible and heartbroken, knowing Athlen could not have survived in the open ocean.

That is, until Tal runs into Athlen days later on dry land, very much alive, and as charming — and secretive — as ever. But before they can pursue anything further, Tal is kidnapped by pirates and held ransom in a plot to reveal his rumored powers and instigate a war. Tal must escape if he hopes to save his family and the kingdom. And Athlen might just be his only hope…

Hiding a life-changing secret is never an easy task for anyone to handle — let alone a teenager. But, in F.T. Luken’s latest fantasy, it isn’t a sexuality the main character is keeping secret. Though In Deeper Waters celebrates queerness throughout, it’s magic that Tal must suppress to keep himself and his world safe.

At face value, this doesn’t sound like the most unique premise in the world. Still, like most novels, it was the characters I met along the way who pulled me deeper and deeper into Tal’s world. From the start, Tal and Athlen are vibrant protagonists who live beyond their traditional archetypes of the reluctant hero or the mysterious, quirky love interest. They’re fairly consistent with the genre in terms of the paths they take throughout the story, but it was refreshing to see a queer, reinvented take on some of the fantasy tropes I’m almost tired of reading.

Most of this can be credited to F.T. Lukens, who truly nailed the tone of the novel throughout. When it feels like many recent YA fantasy novels are aiming towards a more mature, dark approach (which I have nothing against), In Deeper Waters is a fairly gentle ride. As with any story, there are some moments where the mood dips, but Lukens is quick to bring it back up with a dash of hope. After surviving something as hopeless as 2020, this was something I didn’t know I desperately needed.

This carries on to some of the themes injected into the narrative, which are quite a few. Lukens briefly touches on topics like forgiveness, the power of hope, love and — of course — acceptance. Still, these are more like backing vocals to the story’s main chorus: the romance. Though there’s plenty of fast-paced action and twists throughout, In Deeper Waters doesn’t fail at providing a heartwarming, fluffy love story that wholly encapsulates the innocence of first love.

As the season turns warmer, I hope that many other readers choose In Deeper Waters to kick off their summer. From start to finish, its gives off the same type of warmth as a day at the beach: the kind that soothes you to your bones without leaving a gross burn.